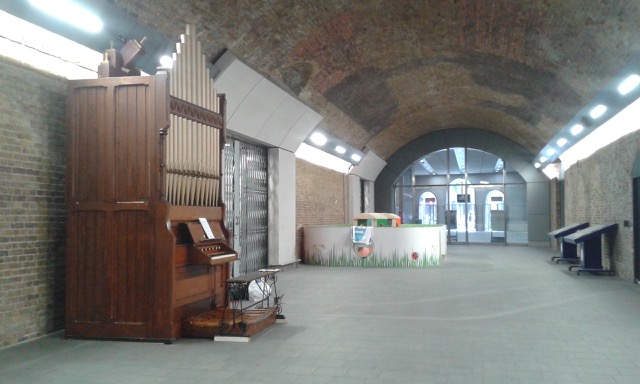 A 250-pipe organ has been installed at London Bridge station so commuters can enjoy its majestic tones on the way to work.

Last Sunday (July 17), just as the new organ was being set up, the UK’s most celebrated young organist rocked up announced.

Anna Lapwood, 26, had caught wind of the new pipes, came to visit, and played to an astounded crowd for five minutes.

Martin Renshaw, an organ builder for over 50 years and founder of the charity Pipe Up for Pipe Organs, said: “She rocked up and I thought ‘oh not another one’.

“I hadn’t quite recognized her but it soon became apparent who she was. She played absolutely brilliantly.. it was lovely.”

Anna Lapwood, Director of Music at Pembroke College, Cambridge, said: “I had been told about it and just went to see if I could find it and saw it behind a barrier and they let me have a play.”

Pipe Up for Pipe Organs is a charity that rescues threatened pipe organs by restoring them in situ or rehoming them.

Mr Renshaw said: “Churches are closing at the rate of one a day and organs are becoming the collateral damage of failing institutions.”

The London Bridge organ comes from a United Reformed Church in Whetstone, North London, which no longer needed the instrument.

Located in Stainer Street, the organ was made around 1880, and has a swell box and a full range of pedal pipes played from a 30-note pedal keyboard.

A swell box is a chamber containing a set of pipes which has shutters that open or shut to regulate the volume.

“It’s one of those instruments that has the power to shake an entire building but it can also play so quietly that you can barely hear it. There’s no other instrument that has such a range”, said Ms Lapwood.

Mr Renshaw explained that from the 19th century to World War I, the UK was Europe’s leading producer of pipe organs.

But with UK churches rapidly closing, Mr Renshaw transports organs to places where they’re wanted, such as Eastern Europe where churches are still being revived thirty years after the fall of the Soviet Union.

A documentary – ‘Organ Stops – Saving the King of Instruments’ – has been made about Mr Renshaw’s quest to save organs and is currently touring the UK.

The London Bridge organ was set up on Sunday, July 17 and should officially open to the public the weekend beginning Saturday, July 30.