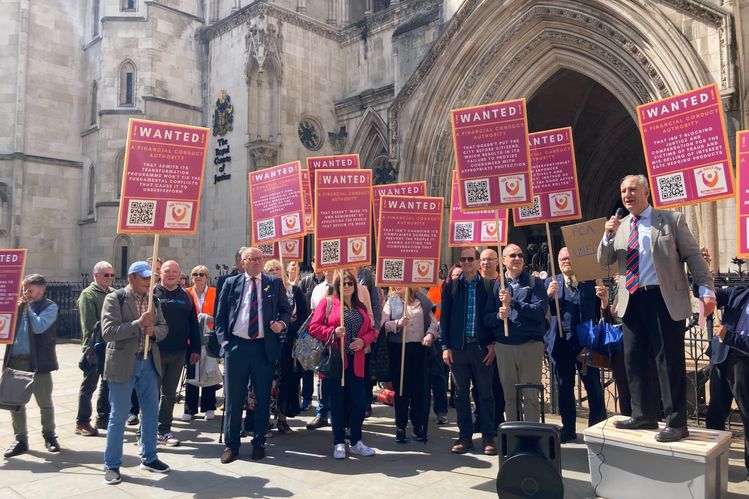 A crowd of roughly 75 protesters branded the Financial Conduct Authority “not fit for purpose” as they began a march from the Royal Courts of Justice on 24 May.

There is “chronic and catastrophic regulatory failure in the UK”, Andy Agathangelou, founder of campaign group the Transparency Taskforce, told the Rally For Better Financial Regulation.

The crowd raised signs calling on the FCA to “stop the financial sector being the worst violator”. They also called on the regulator to “properly supervise the debt market” and not to “have a cozy relationship with banks”.

The rally also included a speech from Martyn Day, the Scottish National Party MP for Linlithgow and East Falkirk.

“I’ve seen too many FCA failures and we need government action,” Day said. “The FCA is not fit for purpose”.

The rally had raised £ 1,024 in donations as at 2pm on 24 May, funding the production of promotional materials like banners and leaflets.

The rally started at the RCJ to deliver a letter requesting a meeting with The Lord Burnett of Maldon, The Chief Justice. It was then set to move towards Westminster to pass the Treasury, Downing Street, and the Houses of Parliament.

The Rally For Better Financial Regulation was organized by Transparency Taskforce, which arranged the protest “because the Financial Conduct Authority is not fit for purpose, and needs to be reformed or replaced”.

The rally is separate from the ongoing strikes from staff at the FCA itself.

“We believe the financial sector is profoundly important to the wellbeing of society, to economic stability and to political stability too,” the consumer-focused group wrote on a website to promote the rally ahead of it taking place. “But we also believe that society cannot have the financial sector it needs and deserves if the regulatory framework that governs it is poor.

READ Anti-FCA activists to march on Parliament for better regulation

“Whilst the FCA is undergoing a transformation, that transformation is being led by the FCA, and we have good reason to believe it will fail to deal with the very real and very serious underlying conflicts and woeful lack of accountability that cause it to underperform. ”

The Taskforce also accuses “the City” of having a “dominant” interest over the regulator, undermining efforts “to properly protect the financial interests of ordinary people”.

While acknowledging that the replacement of the Financial Services Authority with the FCA in 2013 has failed to fix regulation, the Taskforce also argues that the FCA should be replaced if it cannot be reformed.

An FCA spokesperson said: “Over recent years, we have taken significant steps to protect consumers, not least reforming the general insurance market, consulting on a new duty to consumes all financial firms must abide by and supporting small businesses and borrowers during the Covid pandemic . As our new business plan makes clear, we are focused on shutting down problem financial firms who do not meet basic standards and helping consumers as they navigate the rising cost of living. ”

To contact the author of this story with feedback or news, email Justin Cash