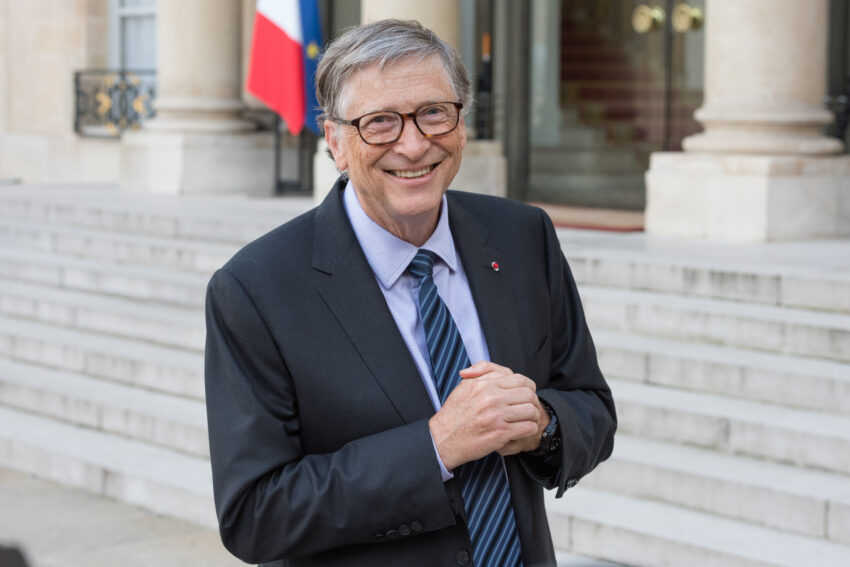 Building your persona and then later down the track your narrative structure first means stripping all the component parts of your image totally back to Ground Zero.

As Pablo Picasso would have demanded before he worked up The Old Guitarist in his Blue Period or The Boy With A Pipe from his Pink Rose Pink Period – a completely blank canvas.

First off the starting block has got to be a focus on your face. What does it automatically say to the world before you attach any Saint George and The Dragon heroic tale to it whatever?

Bill Gates knows his facial archetype as ‘The Super Nerd’ and expertly self-deprecates around it. The 1984 film Revenge Of The Nerds was a celebration of the nerd archetype. And of course the ‘The Nerd’ always tends to wear glasses. The flipside of Superman was Clark Kent, tipping his hat to Nerd-dom with the oversized glasses as his ‘disguise’.

Gates, like the nerd in the playground, always gets ‘tricks played on him’ and is misunderstood because he’s so off-the-Richter-scale bright, so much so, he’s almost ‘outer worldly’.

Gates hams up this nerd status when playing to the crowd.

In his recent damage control interviews around links to Epstein but also his modus operandi behind Covid vaccines and permanent pandemic preparation he geeks it up being a complete ‘open book’ about how so many people push and poke him.

“Me putting chips in arms, doesn’t make sense to me – why would I want to do that?” he told The Guardian.

Gates joked with the BBC in May, that “Only recently I’ve been out in public and some people yell at me that I’m tracking them.”

‘Yes I’m the most hated man in the world,’ he basically admits. ‘People throw rocks at me’ is what he’s openly saying.

That’s what happens to ‘The Nerd’.

The upside is that, at the same time, the nerd facial archetype also embodies Super High IQ levels. So that’s where he gets all the ‘Despite my awkwardness, listen to me, I really do know what I’m talking about’.

That’s all in ‘The Nerd’ facial archetype.

My former client Mark Sait, the co-founder of SaveMoneyCutCarbon.com is a perfect example of understanding the facial archetype when promoting himself in the media, in his instance as ‘The Super Nerd’ as well.

I convinced BBC Radio 4 MoneyBox to have him on to talk to their millions of listeners, got a full page in the Mail on Sunday to its 3,000,000 readers with Sait positioned as an ‘Eco Warrior’, I had him simulcast on both BBC News Channel and BBC World Business show reaching an accumulated 50,000,000 viewers discussing how the BBC could save money and cut carbon by installing more eco-friendly bulbs in their green room, full page Government-funded ‘How to guide’ style ads on how to safely return to work post Covid featuring Sait and his electric car, the list goes on – yes because the URL SaveMoneyCutCarbon was ‘of its time’ because of all the food stampede towards Net-Zero, but largely because of the amplification of Mark Sait, the CEO’s, Bill Gates-esque ‘geek’ qualities.

I upped the ‘superintelligent’ nerd qualities of Sait, personally carrying the ‘Nerd’ message by Messenger-pigeon with his face.

Sait’s brother even works for Microsoft, I said!

To build SaveMoneyCutCarbon’s online widget that automatically links online sales of their sustainable products to an ESG score for company compliance, he hired Cornwall-based tech gurus, The Geeks. That says it all!

Let’s get down to the basics.

If your face was frozen, cropped just above the forehead and around the face, just so the forehead, eyes, nose mouth and chin were in view – what does that, without you uttering one single word – without anyone knowing your back story – or where you’ve been to University, what private members club (in Sait’s case, its the Home Grown club in London for entrepreneurs) you’re a member of – says about you?

Where does your frozen face then lie on a chart of frozen emotion?

My client, the former BBC Dragon James Caan CBE’s face resonates as a swathe ‘Omar Sharif’, much more so than his namesake, the late Hollywood legendary actor, James Caan. Omar is the Caan, the Dragons’ inherent facial archetype.

John Cleese wrote all about it in his 2001 book with Brian Bates called ‘The Human Face’.

“There are 6 billion human faces and yet we instantly recognize faces that we don’t know,” he said. “How is it that this small part of us can be such an immediate and effective way to define who we are?”

And “How do we hide our true feelings when they are written on our faces without even knowing?”

But in between these are 7,000 discreet expressions.

In my opinion, these 7,000 ‘frozen facial emotions’ can all be laid out on a grid in the form of Emojis from sad/angry right across to happy/ecstatic.

Regardless of whether you’re sometimes angry, happy or sad, your normal ‘frozen face’ is automatically encoded with a dominant emotion – whether you’re feeling that emotion or not.

Like Sir Paul McCartney, he’s the deeply sad-eyed Beatle, whether he likes it or not as his dominant facial emotion. That’s whether he’s having a good or a bad day. He’s sad-eyed.

A&A is what I label the requirement at this stage. Acceptance and Amplification about your facial archetype.

Acceptance is about accepting you’re born with a particular facial archetype, but also only by acknowledging it can you unlock a galaxy of media opportunities.

This was the subject of my lecture a few years back at the Institute of Leadership Management. ‘Its your face. You’re stuck with it. Unless you alter it with cosmetic surgery, which I don’t recommend, you have to work with it. Accept that.’

So many entrepreneurs wanting to raise their profile try to position themselves as someone they’re not. They might want to be polo-necked wearing Steve Jobs as opposed to the geeky glasses wearing Bill Gates. But they can’t.

Recognizing what’s already there and working with it is the key to unlocking the media treasure.

The second point is Amplification. Once you’ve worked out where your facial archetype sits on the Emoji chart, then you can amplify It, make it resonate. Like hitting a tuning fork.

Getting a handle on your inherent facial archetype is the doorway of the foyer of the mansion you just entered, opening up into the next room.

Richard Hillgrove is the go-to man for all entrepreneur’s PR needs. At the birth of the BBC business show, Dragons’ Den, he represented BBC Dragon Duncan Bannatyne OBE for 3 years. Then James Caan CBE for 7 years. He even looked after former Dragon and Yo! Sushi Founder Simon Woodroffe OBE. He’s looked after scores of the Channel 4 Secret Millionaires. Hillgrove has represented the Godfather of Advertising, Charles Saatchi through to Dame Vivienne Westwood, Amber Heard, Rose McGowan and Hollywood actor, Steven Seagal – all entrepreneurial in their own right, although not your ‘serial entrepreneur’ in the strictest sense of the word. For Global Entrepreneurship Week 2014, Hillgrove organized the landmark ‘Haka for Business’ in Piccadilly Circus winning the High Impact Award. Now he’s teaching you how to bootstrap and DIY your own PR to media and financial success. You can cut all the crap, drive off-road and make a major impact. He can be reached on: richard.hillgrove@6hillgrovepr.com