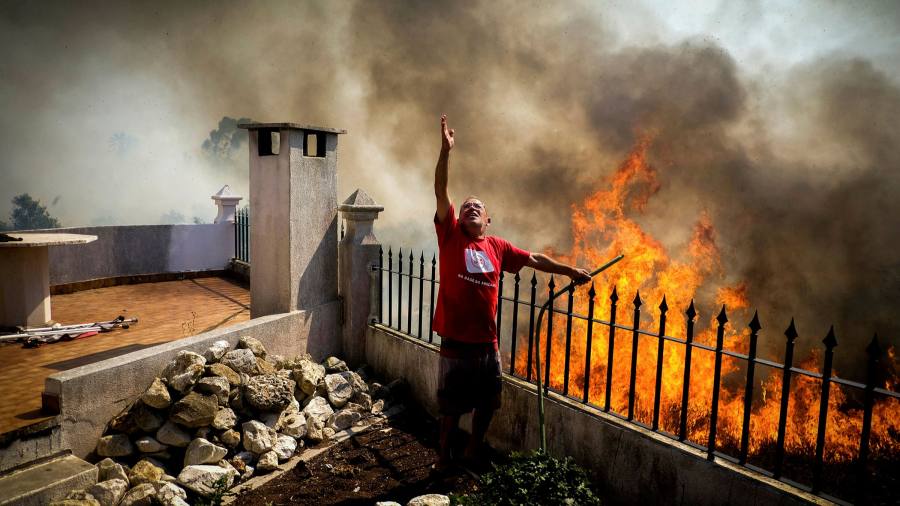 This week, the medieval fortification was engulfed in a towering pillar of black smoke as hundreds of firefighters battled the flames tearing through the tinder-dry forests and farmland on the surrounding slopes.

“People have lost years of hard work,” Octávio Machado, the fire service chief in the town of Palmela, told reporters as two helicopters and a light aircraft doused the blazes with water scooped up from nearby reservoirs.

In a summer of very high temperatures across Europe, similar calamities are afflicting a large swath of the continent, as severe winter droughts followed by intense heatwaves create the hot, dry conditions likely to cause wildfires. As well as Portugal, tracts of forested land in France, Spain, Italy, Greece, Croatia and Turkey have been consumed by fire already this year.

The current European heatwave, the second major one to hit this year, is driven by a high pressure atmospheric system that is sitting over Europe and carrying hot air from Africa.

“The heatwave has been made more likely due to climate change,” said Mark McCarthy of the National Climate Information Center at the UK’s Met Office.

Heatwaves in western Europe have increased three or four times faster than in the rest of the northern mid-latitudes, which includes the US and Canada, according to a recent study published in Nature. One reason is the formation of a “double jet” pattern in which the jet stream branches in two as it crosses Europe.

“Extreme heat events in Europe have been occurring with greater frequency and intensity in the past years,” said Efi Rousi, lead author of the study and senior scientist at the Potsdam Institute for Climate Impact Research. “Our study shows that the increasing persistence of double jets explains about 30 per cent of heatwave trends for the whole of Europe.”

Fanned by strong winds, the blazes in Portugal have destroyed homes in villages across the north and center of a country, where forests, mainly pine and highly flammable eucalyptus, cover more than a third of the territory. The town of Pinhão recorded a temperature of 47 ° C this week, a record high for Portugal in July.

Fires also damaged properties on the southern Algarve coast, forcing the evacuation of a shopping center at the Quinta do Lago resort. Some in Portugal have complained of homeowners who neglected their duty to clear away the dry undergrowth blamed for helping propagate the blazes.

The fires around Palmela, which left 12 people injured and destroyed some 400 hectares of woods and farmland, was just one of 170 that broke out on a single day in Portugal this week.

Locals deployed garden hoses and buckets of water in an effort to save their properties and small holdings from the encroaching flames, as temperatures soared above 40 ° C, while residents of an old people’s home and children at a summer camp had to be evacuated to safety .

Prime Minister António Costa canceled a state visit to Mozambique to oversee the firefighting operations, declaring a national state of emergency that would extend at least until Sunday, depending on weather conditions.

“The response [to the fires] is not more resources, but taking more care, ”he said. But critics, including Machado of Palmela’s fire service, say the government has not lived up to its promises to invest more money in fire prevention.

Italy and Spain have sent aircraft to assist Portuguese firefighters under a European co-operation agreement. But other countries “have their problems too,” Costa said, acknowledging how wildfires are overstretching emergency services across Europe.

Portugal is haunted by memories of 2017, another year of extreme drought, when more than a hundred people perished in deadly forest fires. More than 180 people have been injured this year, four seriously, by fires that have burned more than 30,000 hectares.

Ricardo Trigo, a climatology professor at Lisbon University, said the impact of climate change on the “vicious circle” of dry winters, summer heatwaves and forest fires was particularly strong in the Mediterranean region and similar climates such as California and parts of Australia and South Africa. These are all regions that have been ravaged by wild fires in recent years.

He said that even if the world did manage to keep its greenhouse gas emissions stable for the next two decades – which is not feasible – the heatwaves would continue to become more frequent and extreme because emissions accumulate in the atmosphere for decades.

For the UK, the climate change that had already occurred also made the likelihood of the country’s first 40 ° C day 10 times more likely now than in the past, McCarthy at the Met Office added. This milestone could be passed as early as Monday.

As of Friday, as temperatures dipped to about 33 ° C, the fires in Palmela had been declared extinguished, although more than 100 of the 500 firefighters who fought the flames at their peak remained in case of flare-ups.