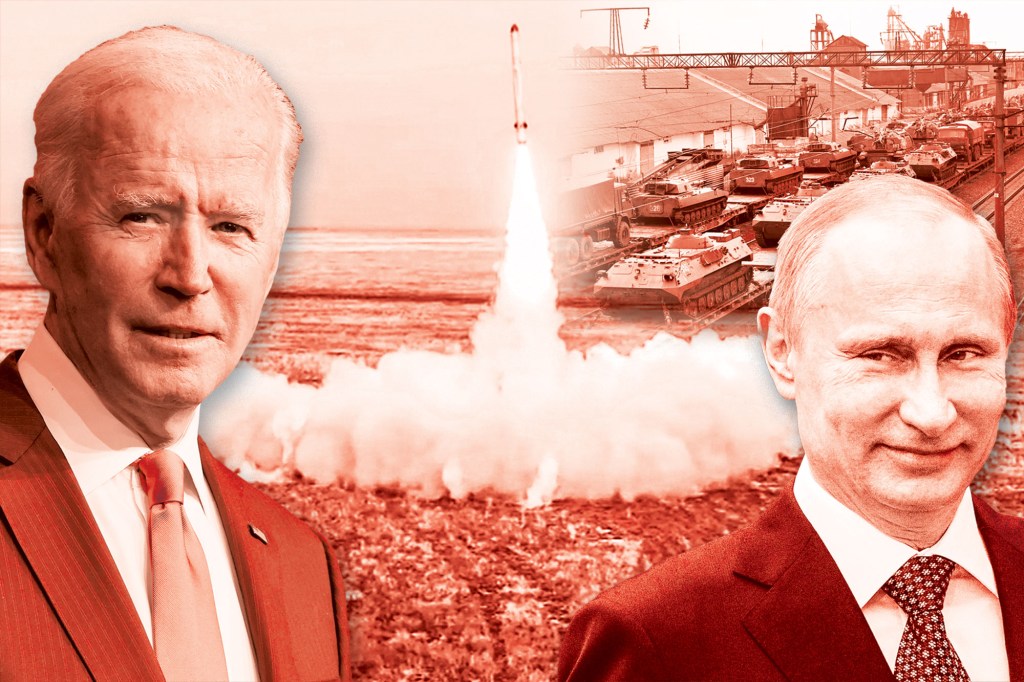 As Russia invaded Ukraine and bombings rocked cities across the country this week, President Vladimir Putin’s aggression was on full display.

Biden’s response? More economic sanctions. Only this time, they will be “severe.” And surely, they will work.

The Russian response? “We do not give as – t about all their sanctions,” said the Russian ambassador to Sweden in an interview with a Swedish newspaper recently. And he is not bluffing. Biden is foolish to think that sanctions will put an end to Putin’s blitzkrieg operation in Ukraine.

Putin has played the long game. He has always known that the US and NATO would strongly oppose his efforts to bring former Soviet satellite countries back under Moscow’s control. That’s why he has been sanction-proofing Russia’s economy since 2014, when the first US sanctions hit Russia after it invaded Ukraine’s Crimea peninsula.

Putin has beefed up Russia’s foreign exchange reserves to an all-time high of $ 630 billion, one of the world’s largest. He has phased out any holdings in US dollars from Russia’s Sovereign Wealth Fund, its state investment fund, in favor of the Euro, the Chinese yuan, and gold. Russia has also been redirecting some exports from the West to China and started manufacturing its own products instead of importing them from Europe and the US.

These measures have stimulated Russian production in key industries such as medicine and technology, reducing Moscow’s dependence on the West. Finally, Russia’s GDP is at $ 1.48 trillion – 3.11% of global GDP – while annual trade between the US and Russia is at just $ 34.9 billion (compared to the $ 615.2 billion traded between the US and China). In short, any Russian funds the US can sanction are negligible.

Ironically, the same Washington “experts” who have been crowing that “Russia is a gas station masquerading as a country,” whose “GDP is the size of Italy’s,” have decided that economic sanctions will stop Putin from executing the Ukrainian scheme he has been plotting for 20 years. The Russians, unlike Americans, are more than accustomed to supply shortages, which were a way of life under 70 years of Soviet rule. So whatever pain Washington thought it could inflict on Russia, the Russians have endured 100 times worse during the “glorious” days of the Communist USSR. The impact of sanctions is already baked into Putin’s calculus.

Putin did not even make a secret of his masterplan. All Washington needed to do was develop a real deterrence strategy, based on an accurate understanding of Putin’s fears and motivations, and also by being honest about US vulnerabilities. It would have been prudent to start in 2007 when Putin first declared at the Munich Security Conference that Russia would no longer abide by international laws set by the West.

Back then, each NATO country should have started contributing the minimum requirement of two percent of their GDP towards collective defense. (Germany, one of the richest nations, which is reliant on Russian energy, gave just 1.53% in 2021.) Meanwhile, Europe had plenty of time to wean itself off of its Russian energy addiction, possibly in favor of US liquefied natural gas, as former President Donald Trump tried to get them to do. The Pentagon and NATO commanders also failed to sufficiently bulletproof their computer networks and satellites from Russian cyberattacks and electronic warfare.

Putin views the current stand-off with the United States as a pivotal moment in a much broader battle over who will call the shots in Eurasia – Moscow or Washington. Russia’s elite is paranoid and views Washington’s promotion of democracy in Ukraine as a ruse for installing anti-Russian and pro-Western governments in Eurasia, including eventually in Russia itself.

Putin believes that losing Ukraine to NATO presents an existential threat to Russia. The threat of economic sanctions pales next to the belief that Ukraine could host NATO offensive systems that would threaten Russia’s regime – if not today or tomorrow, then 10 to 20 years from now. This is why he will do everything, including going to war with NATO, to return it to Russian control.

That is Putin’s thinking, and Biden’s impotent sanctions are clearly not going to stop him.

Rebekah Koffler is a former Defense Intelligence Agency officer and currently a strategic intelligence analyst with The Lindsey Group. She is the author of “Putin’s Playbook: Russia’s Secret Plan to Defeat America.”