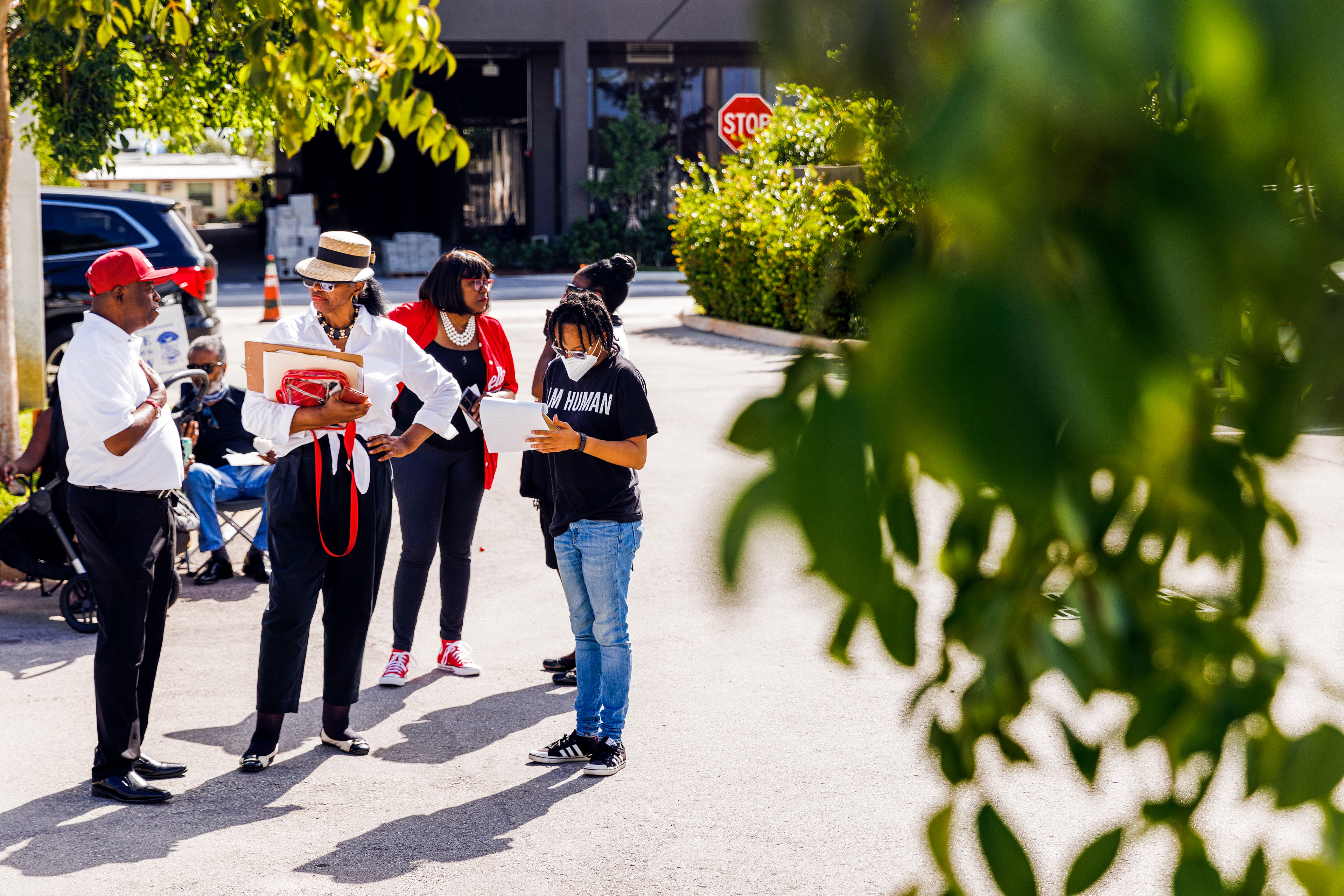 Republican-led legislatures have repeatedly thwarted Medicaid expansion in a dozen conservative states, despite high numbers of uninsured residents. In recent years, supporters of expansion have found success with another strategy: letting voters decide.

Since 2017, Medicaid expansion has passed in seven states where the issue was put on the ballot, adopting the Affordable Care Act provision that would grant health insurance to hundreds of thousands living at or near the poverty line.

Last month, South Dakota voters adopted the program after bypassing the state’s conservative legislature. But any momentum from that November election victory was fleeting.

In Florida and Wyoming, the two remaining states where voters have the option, high costs and other hurdles baked into the ballot process render it almost impossible to enact a measure, advocates say.

“Each of those states, for different reasons, is particularly difficult to move a Medicaid expansion ballot measure through,” raising questions about whether it is “an effective strategy,” said Kelly Hall, executive director of the Fairness Project. The Washington, D.C.-based nonprofit has funded Medicaid ballot campaigns in multiple states and has pushed other progressive causes, including raising the minimum wage and guaranteeing paid sick leave for workers.

That leaves proponents to appeal to Republican lawmakers in the 11 holdout states, mostly in the South or Midwest, where opposition to the health law, also known as Obamacare, has thawed but remains firm.

A decade after the Supreme Court ruled that the federal government could not force states to provide Medicaid benefits to low-income adults, millions remain uninsured. A KFF estimate found that, before the pandemic, 2.2 million uninsured adults without other coverage options in resistant states would qualify.

Leaders of Florida Decides Healthcare, a citizen-led initiative pushing for Medicaid expansion, feel confident that voters would approve it despite Republicans’ yearslong rejection. But Jake Flaherty, the group’s campaign manager, said the earliest it would float a ballot measure is 2026, given the enormous financial and logistical hurdles of mounting a campaign in the Sunshine State.

For a question to reach the ballot, backers must collect signatures equal to 8% of the total voter turnout in the most recent presidential election, or nearly 900,000 signatures. Signatures also must equal at least 8% of the votes cast in that election in each of at least half of the state’s 28 congressional districts.

Any measure must be reviewed by the Florida Supreme Court — but only after proponents collect a quarter of the required signatures from half of the state’s congressional districts. For the measure to pass, 60% of Florida voters must support it.

Recent legislative changes to the initiative process — such as limiting the time to gather signatures, banning sponsors from paying activists based on how many signatures they get, and requiring petition circulators to register with the state — have hindered the political action committee from proposing initiatives, Flaherty said.

“What has spooked folks is that the process has changed so much that they believe it’s just not workable,” he said.

The changes “make Florida an even higher hill to climb,” said Lucy Dagneau, a senior campaign director of the American Cancer Society Cancer Action Network, the political arm of the nonprofit, which has supported Medicaid ballot campaigns.

Florida lawmakers have also tried twice to restrict donations, but a federal judge blocked those laws from taking effect.

The changes have led some of the Florida initiative’s biggest donors, including the Fairness Project, to pause financial support.

“This is a longer-term effort for us,” said Holly Bullard, a member of the executive committee for Florida Decides Healthcare. “We’ve determined to aim for 2026 and to work with grassroots partners from Pensacola to Little Havana, and that’s just not the model that specifically the Fairness Project has been after.”

“The minute it turns into a really strong, viable ballot measure campaign, we will be there with them,” said Hannah Ledford, the Fairness Project’s campaigns director. She said the group is “not set up to do multiyear, multi-decade in some cases, advocacy pushes.”

Since 2019, the Fairness Project has donated more than $400,000 in legal services, printing costs, and other in-kind contributions to the group. Its last donation was in October 2020, according to Florida campaign finance data.

Flaherty estimates the campaign will cost at least $10 million to get on the ballot. That’s based on paying circulators a flat rate of $20 per hour, he said. For voter messaging, he estimates another $10 million. Those costs are considerably higher than other states’ Medicaid ballot campaigns.

The group had about $250,000 on hand as of November, Flaherty said. Past donors have included the Service Employees International Union, Planned Parenthood, Florida Voices for Health, and the Florida Policy Institute.

In Wyoming, the last time voters enacted a citizen-initiated measure was in 1992, according to the ballot-tracking website Ballotpedia. State rules say a ballot measure can’t force lawmakers to appropriate funds, an obstacle because Medicaid is funded jointly by the federal and state governments.

“The more secure route — and the one that doesn’t threaten coverage for people — is through the legislature,” Dagneau said.

A ballot campaign “is not for the faint of heart,” said Jan Cartwright of the Healthy Wyoming advocacy group.

Supporters in Wyoming believe the legislature provides their best shot because there is some Republican support there.

In November, a Wyoming legislative committee approved a bill following testimony from Montana Rep. Edward Buttrey about how the state has benefited since 2015. Newly covered people relied less on expensive emergency room care, used higher rates of primary care, and were more likely to work, the Republican testified.

“If someone is unhealthy or they’re addicted, they simply are unable to contribute to their own or their state’s success and health,” Buttrey said.

Wyoming Rep. Steve Harshman, also a Republican, is listening. “I’ve voted against this probably 10 times,” he said. “I’ve changed my mind. I’ve learned more, and I think it’ll be really good for our state.”

The Wyoming Department of Health estimates roughly 19,000 people would enroll within the first two years.

Though Wyoming’s House passed expansion legislation in 2021, a state Senate committee defeated the bill, and opposition remains in the Republican-controlled legislature.

State Sen. Tom James, a Republican, voted against the bill in November. “Every employer I’ve ever worked for has had the option for insurance,” he said. “We’ve had the option to not take it. I want to make sure that we’re covering people that don’t have the option of insurance.”

In other non-expansion states, little has changed. Brian Kemp, Georgia’s reelected Republican governor, is committed to implementing a smaller program that would provide Medicaid benefits to an additional 50,000 adults and require them to have a job or volunteer.

But other factors could raise the odds of expansion next year in a few states, Dagneau said. A financial incentive in the American Rescue Plan Act of 2021 gives new expansion states a 5 percentage point bump in Medicaid funds for two years, more than offsetting the cost of insuring more people, according to KFF estimates.

And once the Department of Health and Human Services lets the covid-19 public health emergency expire, millions of people on Medicaid could lose their benefits. A federal mandate has prevented states from kicking people off Medicaid during the pandemic.

That mandate has ensured coverage for millions of Americans who otherwise may not have had it, and engendered support for Medicaid expansion, supporters say.

“The pandemic has changed a lot of folks’ attitudes about whether or not health care coverage is something that you need,” Dagneau said.

Advocates believe North Carolina is the most likely state to expand its program next, covering an estimated 400,000 uninsured people. Democratic Gov. Roy Cooper and Republican leaders in the North Carolina General Assembly back the move but have been unable to reach a compromise.

The John Locke Foundation, a conservative think tank in North Carolina, opposes expansion on the grounds that it would create unsustainable financial burdens, among other reasons. But it seems the state is in a holding pattern.

As Mitch Kokai, its senior political analyst, put it: “I think the one-word description right now is ‘stalemate.’”

Binance says Mazars, the auditing firm that worked on proof-of-reserves reports for Binance, Crypto.com, and others, has paused work for all crypto clients (Jamie Crawley/CoinDesk)