Who Is Bryce Leatherwood? About ‘The Voice’ Season 22 Winer – Hollywood Life 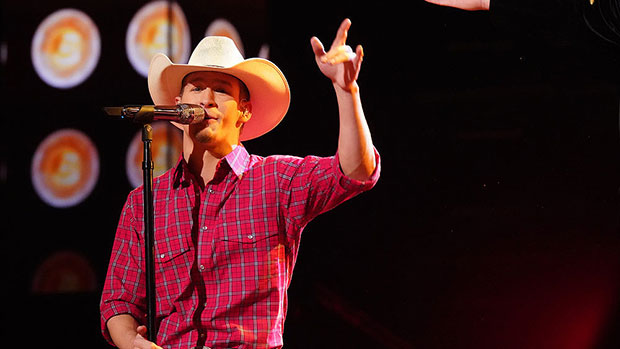 Bryce Leatherwood sang his heart out all the way to The Voice season 22 finale and walked away a winner! The 22-year-old country singer was declared the new champion of The Voice during the epic finale on December 13. From his Blind Audition to the top 5, Bryce stayed true to his country roots with his standout performances.

So, who is Bryce Leatherwood? He’s a country singer who has a bright future in the music industry. From his start on The Voice to what he’s been up to in his home state of Georgia, here’s what you need to know about Bryce.

Bryce’s The Voice journey started out in the Blind Auditions. performed a terrific rendition of “Goodbye Time” by Conway Twitty for his Blind Audition. Blake Shelton was the first to turn his red chair, followed by Gwen Stefani and John Legend. Blake said he was “blown away” by Bryce’s performance. “You sounded fantastic. I heard the richness in your voice,” John told the singer. Understandably, Bryce ended up picking Blake as his coach.

Bryce has since fully embraced his country roots with covers of songs by George Strait, Zac Brown Band, and more. He also won the Instant Save during one round of live eliminations. He faced off against Bodie, Brayden Lape, Morgan Myles, and Omar Jose Cardona in the season 22 finale, but he ultimately emerged victorious.

2. Bryce is thankful that Blake Shelton is his mentor.

“I believe as a mentor, it doesn’t get much better than Blake Shelton,” Bryce told HollywoodLife EXCLUSIVELY after the top 10 live shows. “He’s earned his stripes. He’s just a great guy. He brings it down home, so you don’t have to look at him like he’s this big, tall figure. That means a lot. He gets right down to your level and makes you feel at home.”

Ahead of the finale results, Bryce revealed the best advice he’s gotten from his coach. “Blake’s always said, ‘Be yourself and carry that presence with you on stage and really just have fun. Don’t take it so seriously. You’re here because you’ve done this for your whole life, and this is what you were born to do.’ Basically, I think Blake’s biggest piece of advice that I’ll carry with me is to be myself and be nothing else. I’m so happy to be on Team Blake,” Bryce told reporters, including HollywoodLife.

Omar Jose Cardona: 5 Things To Know About ‘The Voice’ Standout Who Is A Finalist

3. Bryce showed off his vocal range in his finale performances.

Bryce wowed with his performances of Travis Tritt’s “T-R-O-U-B-L-E” and Keith Whitley’s “Don’t Close Your Eyes.” Blake admitted during the show that if Bryce doesn’t win The Voice, he’s still “won a career” in music.

“I want to show more vocal range,” he told HollywoodLife ahead of the finale. “Country songs are a little different, but I’d love to sing something out of my genre if I got the opportunity to or something. A little bit more range so I can squeal and belt like all these incredible singers like I wish I could do all the time. I don’t know, just something different to throw a curveball again.”

4. Bryce is currently finishing up college.

Bryce is in his final year at Georgia Southern University, according to his NBC bio. He is completing a degree in business. He hopes to eventually manage his music career with help from his degree.

Bryce is from Woodstock, Georgia. He currently lives in Statesboro, Georgia. He’s gotten his experience on stage performing in the college bar scene in Georgia.