Who Is Bodie? About The Standout Finalist Of ‘The Voice’ Season 22 – Hollywood Life 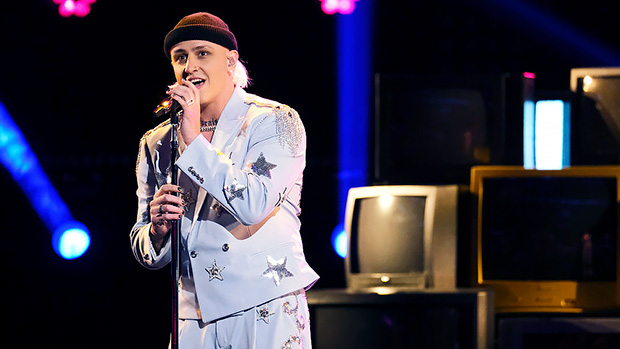 Bodie Kuljian, known as just Bodie, has been one of the frontrunners of The Voice season 22 from the very beginning. The 29-year-old singer has slayed each and every performance on The Voice stage with his incredible covers. Blake Shelton, who is Bodie’s coach, knows he’s found something truly special in Bodie. Blake thought Bodie had what it took to make it to the season 22 finale, and Bodie’s done just that.

So, who is Bodie? From his original music to his family, get to know this talented Voice contestant who has what it takes to become the next Voice champion.

1. Bodie got a 4-chair turn during his audition.

Blake Shelton was the first coach to turn his red chair for Bodie. John Legend followed quickly after Blake. Gwen Stefani and Camila Cabello eventually turned their red chairs as well. “Everybody is going to remember you, the way you look, the way you sound,” Blake told the singer. “You have what it takes to make it to the finale of The Voice.” John added his own praise, “Your vocal presence was just so robust. You really do stand out.” Gwen pointed out that Bodie has “such an incredible tone. It’s just rare, and that means you’re rare.”

Bodie chose Blake as his coach, and the country singer has continued to support Bodie throughout the competition. “In the interaction and further along in the competition, we get to interact with him a little bit more and a little bit more candidly. He’s just always so supportive of letting me be me and be unique and make the weird arrangements,” Bodie told HollywoodLife EXCLUSIVELY.

Bodie is happily married to Royale Kuljian, who is a photographer. They celebrated their 7th anniversary in June 2022. “7 years married to the greatest human i’ve ever known. I honor you for the wise, intelligent, passionate, humble, patient, caring, steadfast, talented, hilarious, beautiful woman that you are. This has been the best 7 years of my life. You are a blessing to everyone that knows you. I can’t believe we get to do this for a lifetime,” Bodie wrote in his Instagram post to Royale.

Bodie and Royale have three adorable children together. They have a son, Indie, and two daughters, Violet and Goldie. Royale brought Indie along to watch his dad audition for The Voice. Bodie dedicated one of his finale performances to his kids.

Bryce Leatherwood: 5 Things To Know About The Country Crooner In The Top 5 Of ‘The Voice’ Season 22

“Just knowing that right now I’m pursuing something that I know I’m called to do, and I’m seeing so much fruit from it, it makes me so happy to know that they’re seeing it take place. I would imagine they’re proud of me in this moment,” Bodie told reporters, including HollywoodLife, about his kids watching him compete on the show.

4. Bodie has released his own music.

Bodie has dropped two EPs, Love at First Fight and Me and You. His singles “moonlight,” “teenage love,” and “i think i like you” all have over 1 million streams on Spotify. His latest single “GHOST” was released in June 2022.

After the finale performances on December 12, Bodie revealed his plans after The Voice is over. “I wanted to get to this point. So as far as I’m concerned, I’ve already won,” Bodie told reporters, including HollywoodLife. “I’m so excited to release the music I’ve already written that hasn’t been released yet, hit the road, do shows do all that. I’m really, really excited.”

5. Bodie has directed a documentary.

Bodie revealed he directed his first documentary in a May 2022 update on Instagram. He also served as an executive producer on the documentary.