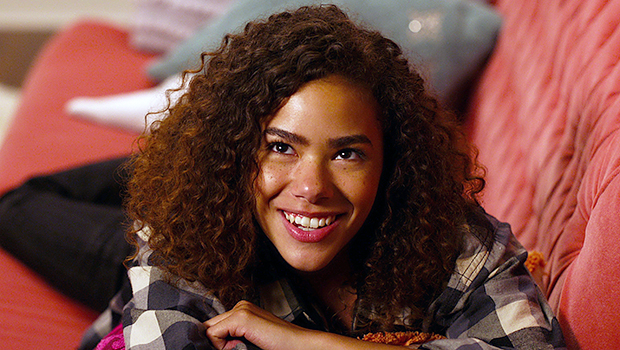 Ginny & Georgia season 2 made its long-awaited return on January 5, 2023, after nearly 2 years of waiting. Antonia Gentry stars as Ginny in the hit Netflix series, which broke a Netflix record by staying #1 on the streaming service’s top 10 rankings for more than 27 days. This mother-daughter coming-of-age story has millions hooked, and that’s thanks to Antonia and her co-star Brianne Howey.

Antonia was a Hollywood newcomer before Ginny & Georgia, and now she’s one of Hollywood’s most talented rising stars. HollywoodLife has rounded up 5 key things you need to know about the 25-year-old.

1. Antonia is one of the leads of Ginny & Georgia.

Antonia is one of the two titular roles in Ginny & Georgia. She plays Ginny Miller, the teen daughter of Georgia Miller. Antonia had a breakout performance in Ginny & Georgia season 1 alongside Brianne. The series follows Ginny and Georgia who move to a small New England town to try and establish a normal life for themselves with Georgia’s son Austin. But it hasn’t been easy for the family. In season 2, Ginny struggled with her anxiety and began seeing a therapist as she tried to understand her mother’s actions. The series also stars Scott Porter, Felix Mallard, Jennifer Robertson, Sara Waisglass, Raymond Ablack, and more.

2. She went to college in Georgia.

Antonia went to Emory University in Atlanta for drama in 2015 after attending the John S. Davidson Fine Arts Magnet School. While at Emory, Antonia was a part of the school’s Rathskellar Comedy Improv troupe. Back in 2019, the actress gave her fellow troupe members a shoutout on Instagram.

3. She got her start in another Netflix project.

Her first major role was in the 2018 Netflix film Candy Jar. She also appeared in an episode of Raising Dion season 1, which aired in 2019. She’s keeping her roles in the Netflix family with Ginny & Georgia! In addition to Ginny & Georgia, Antonia is starring in an upcoming Netflix movie Time Cut, which also features Outer Banks star Madison Bailey.

4. She got the role of Ginny while still in college.

Antonia was still in her final year at Emory University when she learned she was going to play Ginny in the Netflix series. She explained how she juggled it all in an interview. “My professors were understanding and encouraging for the most part, but it was pretty hard bouncing back and forth between being a full-time college student, working part-time, and also trying to pursue this career,” she told W.

5. Antonia loves that Ginny is a ‘flawed’ character.

Following the release of season 1, Taylor Swift publicly called out Ginny & Georgia for what she deemed a “lazy, deeply sexist joke.” Antonia’s character says in the first season, “What do you care? You go through men faster than Taylor Swift.” Antonia didn’t directly respond to Taylor’s tweet, but she did write a long message about the impact the show has had on her life.

“I never would have imagined something like this as a young girl — that is, having a voice capable of impact,” she wrote on Instagram. “It is so meaningful to see hundreds of messages from fans in my inbox who feel seen, heard and understood because of the show and its characters. It has also been fun to hear from those who were just happy to be along for the entertaining ride. As someone who grew up feeling voiceless and unimportant, and who did not see herself reflected on-screen, Ginny Miller was finally a reprieve. Finally, a character who was just as confused and imperfect as I was gets a chance to exist.”

When asked about Taylor’s criticism more than a year later, Antonia told Elite Daily, “That’s what happens with shows that just make people so emotional and attached,” she says. “They stir up real conversations and make people feel all kinds of emotions, and I think it speaks to the imperfections of the characters for people to pay attention to and to help look inside of themselves and then see maybe some of those same traits might be there that they need to work on.”


Idaho murders suspect arrives in state after agreeing to extradition