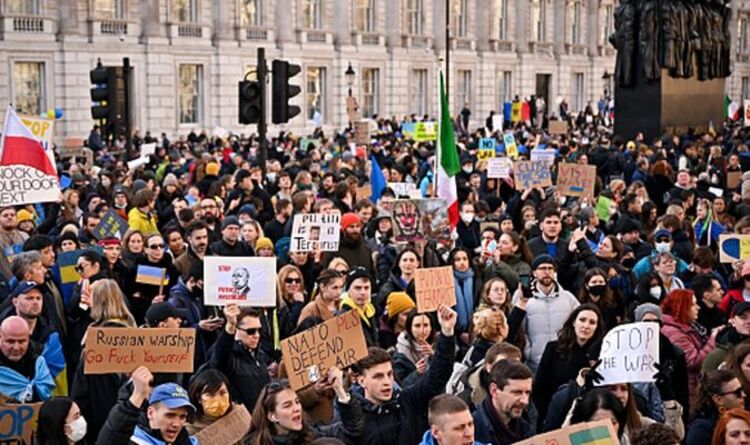 Protests against the ongoing conflict in Ukraine have now had to make “alternative arrangements”. Hundreds of Ukrainians and supporters gathered outside Downing Street this week, calling for Vladimir Putin to withdraw his forces from the country. Tweeting this morning, the Met said: “Whitehall has been closed due to a serious gas leak, and is likely to remain closed for some time.

“We are in the process of making alternative arrangements for planned protests in the area today.

“If you are attending, please follow the instructions of police officers.

Yesterday hundreds gathered in London, both outside Russia’s embassy in Kensington and in Downing Street.

They called for Vladimir Putin to withdraw his forces from Ukraine.

Similar rallies have taken place elsewhere in the UK and in Ireland.

Protests took place in Edinburgh, Manchester and Dublin, as well as across the globe.

Protests have also erupted in Russia.

Thousands of Russians are taking to the streets in support of Ukraine.

Ukrainian President Volodymyr Zelenskiy thanked Russians who have opposed the war that their president, Vladimir Putin, has ordered.