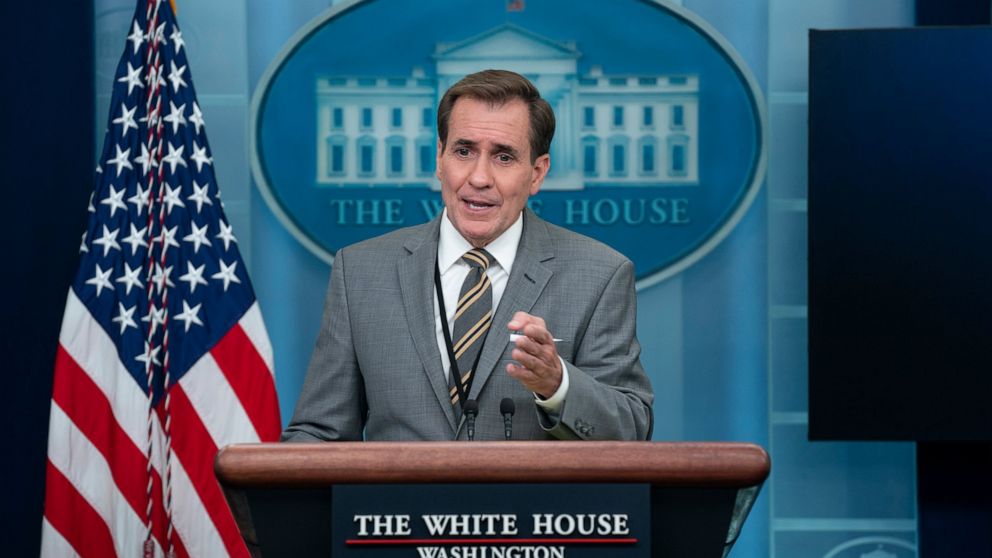 WASHINGTON — The White House on Monday decried Beijing’s rhetoric over an expected visit by House Speaker Nancy Pelosi to Taiwan, vowing the United States “will not take the bait or engage in saber rattling” and has no interest in increasing tensions with China.

White House National Security Council spokesman John Kirby underlined that the decision on whether to visit the self-ruled island that China claims as its own was ultimately Pelosi’s. He noted that members of Congress have routinely visited Taiwan over the years.

Kirby said administration officials are concerned that Beijing could use the visit as an excuse to take provocative retaliatory steps, including military action such as firing missiles in the Taiwan Strait or around Taiwan, flying sorties into Taiwan’s airspace and carrying out large-scale naval exercises in the strait.

The Biden administration pushed back on Beijing as Pelosi held talks with officials in Singapore on Monday at the start of her Asian tour.

While there have been no official announcements, local media in Taiwan reported that Pelosi will arrive Tuesday night, making her the highest-ranking elected US official to visit in more than 25 years. The United Daily News, Liberty Times and China Times — Taiwan’s three largest national newspapers — cited unidentified sources as saying she would arrive in Taipei after visiting Malaysia and spend the night.

Talk of such a visit is sparking fury in Beijing, which regards Taiwan as its own territory and has repeatedly warned of “serious consequences” if the reported trip goes ahead.

“Those who play with fire will perish by it,” Zhao said. “We would like to once again admonish the US that we are fully prepared for any eventuality and the PLA will never sit idly by.” The People’s Liberation Army is China’s military.

China’s UN Ambassador Zhang Jun reiterated Beijing’s threat to take action if Pelosi makes what he called a “provocative” visit to Taiwan, reiterating that the “one China principle” is a “red line” and “we allow no one to cross this red line .”’

Zhang told a news conference at the start of China’s presidency of the UN Security Council this month that Taiwan’s tendency towards independence is further developing “with the support of some external forces,” which he did not name.

“So, if we do not take appropriate, forceful action to stop it, and the situation might even be out of control,” Zhang said. “So it is legitimate for the Chinese government, for the Chinese military, to take any action to prevent Taiwan to go further down the wrong direction, namely towards independence.”

Zhang said he wasn’t in a position to reveal what actions, “but what I can tell is that the firmness, the determination is there. We will do whatever we can to defend our sovereignty and the territorial integrity.”

Chinese President Xi Jinping also warned the US against meddling in Beijing’s dealings with the island in a phone call last week with President Joe Biden.

China has been steadily ratcheting up diplomatic and military pressure on Taiwan. Threats of retaliation for a visit by Pelosi have driven concerns of a new crisis in the Taiwan Strait, which separates the two sides, that could roil global markets and supply chains.

The Biden administration has tried to assure Beijing there was no reason to “come to blows” and that if such a visit occurred, it would signal no change in US policy. Administration officials on Monday called on China to tone down the rhetoric, underscoring that there was no reason for Beijing to escalate tensions in the Taiwan Strait over the potential visit. Members of the Senate Foreign Relations Committee were to receive a classified briefing on Taiwan from senior Pentagon and State Department officials on Monday evening.

“What I can say is this: this is very much precedent in the sense that previous speakers have visited Taiwan, many members of Congress go to Taiwan, including this year,” Secretary of State Antony Blinken said. “And so, if the speaker does decide to visit and China tries to create some kind of crisis or otherwise escalate tensions, that would be entirely on Beijing.”

Still, US officials have signaled that the military would be prepared to respond if needed in the event of any action by China in response to any possible stop in Taiwan by Pelosi.

On Monday, the Navy aircraft carrier USS Ronald Reagan and its strike group were in the Philippine Sea, according to the officials who spoke on the condition of anonymity to discuss military operations.

The Reagan, the USS Antietam, a cruiser, and the USS Higgins, a destroyer, left Singapore after a port visit and moved north, heading to their homeport in Japan. The carrier has an array of aircraft, including F/A-18 fighter jets and helicopters, on board as well as sophisticated radar systems and other weapons.

Taiwan and China split in 1949 after the Communists won a civil war on the mainland. Both sides say they are one country but disagree over which government is entitled to national leadership. They have no official relations but are linked by billions of dollars of trade and investment.

The United States switched diplomatic recognition from Taipei to Beijing in 1979, but maintains informal relations with the island. Washington is obliged by the Taiwan Relations Act, a federal law, to see that Taiwan has the means to defend itself.

Washington’s “One China policy” says it takes no position on the status of the two sides but wants their dispute resolved peacefully. Beijing promotes an alternative “One China principle” that says they are one country and the Communist Party is its leader.

“We expect to see Beijing continue to use inflammatory rhetoric and disinformation in the coming days,” Kirby said. “The United States, by contrast, will act with transparency.”

Singapore’s Foreign Ministry said Lee welcomed a US commitment to strong engagement with the region, and the two sides discussed ways to deepen US economic involvement through initiatives such as the Indo-Pacific Economic Framework.

Lee and Pelosi also discussed the war in Ukraine, tensions surrounding Taiwan and mainland China, and climate change, it said in a statement. Lee “highlighted the importance of stable US-China relations for regional peace and security,” it added, in an apparent allusion to reports of Pelosi’s visit to Taiwan.

Pelosi has said she is visiting Singapore, Malaysia, South Korea and Japan in a tour to discuss trade, the COVID-19 pandemic, climate change, security and “democratic governance.”

On Thursday, Pelosi is to meet with South Korean National Assembly Speaker Kim Jin Pyo in Seoul for talks on security in the Indo-Pacific region, economic cooperation and the climate crisis, Kim’s office said in a statement.

It declined to provide further details about her itinerary, including when she is arriving in South Korea and how long she’ll stay. Pelosi’s schedule for Wednesday remains unclear and there were no details on when she will head to Japan.