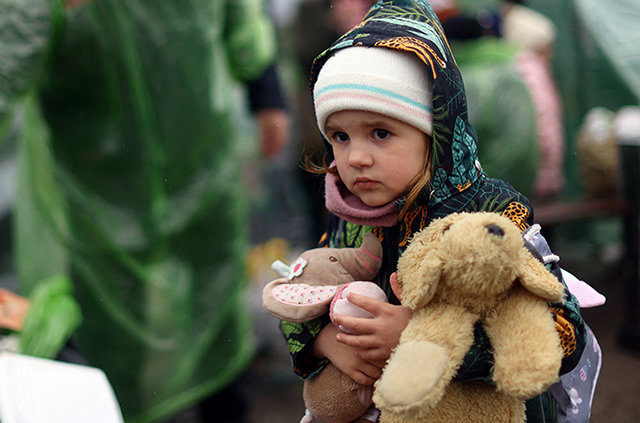 Last week, President Joe Biden announced the United States would accept up to 100,000 people fleeing the war in Ukraine.

Since Russia began attacks across Ukraine on Feb. 24, more than 4 million Ukrainians have fled the country, many to nearby countries including Poland, Romania and Hungary. Until Biden’s announcement, it was not clear what the US posture toward people fleeing Ukraine would be.

“Many Ukrainian refugees will wish to stay in Europe, closer to their homes, but we’ll also welcome 100,000 Ukrainians to the United States with a focus on reuniting families,” Biden said in a speech last Thursday.

In Minnesota, a state that has historically been welcoming of refugees, the state government and refugee resettlement agencies are waiting for more information about what the announcement could mean – but there are still more questions than answers about what the process could look like here.

“We’re watching and waiting with everyone else to figure out what immigration process they’ll use to host these individuals,” said Cori Ertz, the development director at the International Institute of Minnesota.

Refugee resettlement agencies have heard little more than the general public has about plans to bring Ukrainians fleeing the war to the United States.

“It’s not going to look like 100,000 in one big swoop,” Meyers said, especially given many Ukrainians are in stable situations in neighboring countries now.

In that sense, the process of resettlement would look much different from the resettlement of refugees from Afghanistan after the Taliban took over the country last year. More than 70,000 Afghans were swiftly evacuated, moved to military bases, then resettled throughout the country.

In a factsheet about the refugee announcement, the Biden Administration says people fleeing Ukraine will be brought to the US “through the full range of legal pathways.” That could mean a few different processes, including but not limited to the US Refugee Admissions Program.

Some Ukrainians have already been admitted to the US through a process called humanitarian parole. This is a process by which the US can quickly and temporarily admit people on a humanitarian basis, at which point they may be able to file for asylum or a visa to stay, Meyers said. It’s not clear if the US will use this program in a more widespread fashion to quickly admit more people from Ukraine.

Ukrainians who are already in Minnesota and have been since March 1 are eligible to apply for temporary protected status, or TPS. Many of the people who fall into this category are likely students or are working in the US temporarily, Ertz said. The TPS designation is currently 18 months for Ukrainians and people who get it can also apply to be allowed to work in the US

TPS is often used in situations where people need to leave their home country for a safe place to stay temporarily but expect to be able to go back home, Ertz said.

“With the Ukrainian situation, and conflict and invasion being relatively new, it’s hard to know yet whether or not Ukrainians will need long-term protection or whether or not they will choose to return home when it’s safe for them to do so,” Ertz said.

Another potential route is family-based visas, which allow US citizens or lawful permanent residents to petition to bring family members over.

Then there is the US refugee resettlement program, which includes permanent resettlement and a path to US citizenship and was the way many Minnesotans in the state’s Hmong and Somali communities’ families arrived in the US

Some Ukrainians may be eligible to come to the US through the Lautenberg program, part of the refugee resettlement program for people in the former Soviet Union from certain religious groups.

Arrive Ministries, based in Richfield, is currently in the process of resettling one family from Ukraine that will arrive next week through the Lautenberg program, said Kate Shermer, the communications director. Their situation is not related to the current conflict in Ukraine.

“If folks come to Minnesota, it will largely be because they have family or friends here that can help support them,” Ertz said.

As of now, it’s not clear what shape the process of welcoming Ukrainians to the US will take, and it’s not even clear how many Ukrainians want to come to the US

“Look for the trusted organizations. If you really want to help Ukrainians right now then maybe look to some overseas organizations that are working in Poland, or in providing relief to Ukrainians that are leaving… because as I said, resettlement is going to be a further-out process, ”he said.

The US Committee for Refugees and Immigrants has put together more information for Ukrainians in the US and people with family in Ukraine, available here.