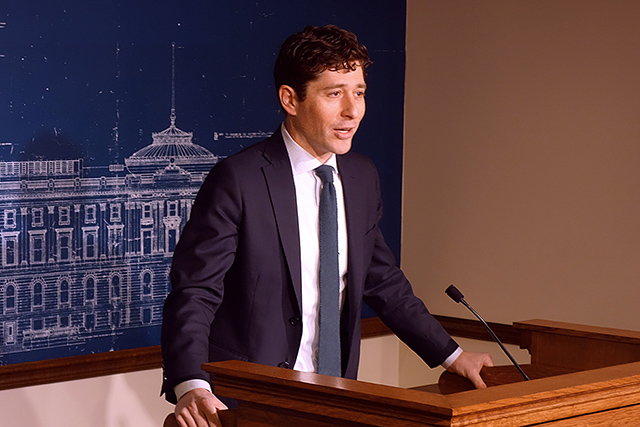 Minneapolis may have officially made the switch to a “strong mayor system” last fall — but the city isn’t done changing its government structure.

Seven months after Minneapolis voters approved a ballot measure shifting the city to a “strong mayor” system, and six months after the change went into effect, Mayor Jacob Frey is working out further plans that he says will make it easier for the mayor to function as the city’s CEO and use the executive powers granted to the mayor’s office by voters.

Though some of the details of Frey’s plan need to be worked out — the entirety of the proposal has yet to be delivered to the City Council — the basics of the proposal are in place. Here’s what to know about what the new structure would mean, and how council members are greeting what they know of the plan so far.

A quick history lesson: Before the Nov. 2 vote, which asked voters if they want to “shift certain powers to the Mayor, consolidating administrative authority over all operating departments under the Mayor,” the city’s legislative, policymaking and executive authorities were shared between the City Council and the mayor, though there were exceptions, most notably the mayor’s singular authority over the Police Department.

The city’s Executive Committee, which was made up of the mayor and a group of City Council members, appointed department heads for Minneapolis’ charter departments, including public works, the health department, community planning and economic development.

At the time, the appointment process had four steps: a mayoral nomination, Executive Committee approval; a public hearing; and full City Council approval.

It was a complex process, even compared to the federal government’s two-step process for appointing members to the president’s cabinet, says Minneapolis City Clerk Casey Carl; it also lacked clear executive lines of authority and accountability. “It was repeatedly cited as a challenge to the city’s operation since 1923,” said Carl.

Since Dec. 3, when the city’s organizational structure shifted so that the mayor is the city’s chief executive, the city has used a simpler, two-step process for appointing directors for charter departments: The mayor makes a nomination and the City Council votes to confirm. The new system also makes accountability clear: The responsibility for those departments, and department heads, rests with the mayor.

Not all departments are currently directly under the mayor’s purview, however. Under the new system, the City Council has all legislative authority, and it has sole oversight over the city auditor and city clerk.

Though all executive decisions now run through the mayor, Frey also wants to update the city’s operational structure to better facilitate the office’s newfound executive authority. He also believes that having direct authority over nearly every department is too much for one person to manage under the current system.

With that in mind, last year Frey put together a 35-member workgroup that included people with experience in government at the city, county and state levels, as well as others from the private sector. The group also reached out to officials in other cities, including Duluth and San Diego, that operate under strong mayor systems.

“There aren’t a lot of natural opportunities to get that kind of feedback from a group of individuals like those the mayor assembled,” said Emily Piper, a member of the workgroup who served as the head of the Department of Human Service under Gov. Mark Dayton and is now the vice president of government and external affairs for the Hazelden Betty Ford Foundation.

After working through the winter, the group presented Frey with two possible models — and one to avoid.

Finally, a third option — which the work group suggested Frey avoid — would add a deputy mayor to oversee all of the mayor’s departments.

Even though the workgroup was instructed to present options, workgroup member and former Minneapolis City Council Member Robert Lilligren said the majority of its members leaned toward the option Frey signed on to: creating a four-member mayoral cabinet to run the city.

Under that plan, three of the four cabinet positions — the city attorney, a community safety commissioner and a chief operations officer  — would be nominated by the mayor and subject to council approval, and nearly all administrative departments would be reorganized to align under either the chief operations officer or the community safety commissioner.

The latter might be the most significant part of the new structure. Under a proposed Office of Community Safety, the community safety commissioner would oversee all public safety services, including 911, neighborhood safety and the Office of Violence Prevention — as well as the police, fire and emergency management departments.

The new chief operations officer, meanwhile, would be in charge of public works, civil rights, community development and regulatory services. The role would also oversee two new deputies, one of whom would be in charge of finance and property services, IT, human resources, intergovernmental relations and the assessor’s office; the other deputy would oversee communications, 311, and neighborhood and community relations.

The City Attorney’s Office, which already reports directly to the mayor, would also be part of the cabinet, though the duties of the attorney’s office would remain the same, as would the responsibilities of the mayor’s chief of staff.

A ‘de-siloed’ approach to public safety

A lot of the details for Frey’s new government proposal have yet to be ironed out, but Frey says that a “driving force” for him in choosing the cabinet proposal was the creation of the Office of Community Safety and the role of community safety commissioner.

“We need to have a comprehensive approach to public safety and that work needs to be coordinated under one roof,” Frey said. “For one mayor or mayor’s office, it’s difficult to coordinate all of those facets of safety and work on accountability and ensure that the work is well integrated. To have a person doing that as their full-time job through a de-siloed approach I think is really important.”

As for what the community safety commissioner will do, Frey said “the best way to characterize” the position is as a person who has management and safety expertise — though is not necessarily a licensed police officer — who is able to devote their energy to the day-to-day performance and accountability of the city departments under their purview. “We spend a large percentage of our time, presently, in my office focused on issues of safety and accountability, specifically in our Police Department, and to have someone with management and safety expertise doing this consistently would yield better results,” Frey said.

Under the proposal, the position of police chief “largely doesn’t change with respect to responsibility and duties,” Frey said, adding that the new community safety commissioner won’t overtake the police chief’s current authority over the Police Department.

“But you will have consistent management — not just of the chief of police but the fire chief, the head of emergency services, the Office of Violence Prevention —  and making sure that they are all coordinated and working together,” Frey said. All mental health responders will also be managed by the community safety commissioner.

Accountability for police and all other safety personnel, under this new model, would improve, according to Frey, because putting all public safety operations under one roof “professionalizes leadership in the department and adds additional lines of accountability and reporting and makes clear what those lines are.”

Frey said he believes that the new structure has the potential to transform safety services in the city. “You’ve got an approach where people are working together,” said Frey. “If there’s a mental health-specific call it goes to the mental health-specific entity and it’s coordinated, you have someone overseeing the whole approach that can unblock barriers that exist.”

What the council thinks (so far)

Frey said he also believes the new structure will ease tensions between departments and funnel city business through a “unified structure.”

“It gives the ability to direct a staff and run a government. We just didn’t have that ability before,” Frey said. “Before, there’d be something that needed to get done. I’d have major department heads in my office like the chief of police, city attorney, director of CPED and director of Regulatory Services, city coordinator. And I’d be like, ‘All right, here’s something we need to get done fairly quickly here. You do this, you do that, you do the other: Go.’ And the first question that was always asked was, ‘What’s the City Council gonna say?’ It prevented action or, at the very least, dramatically delayed it. And that’s not a knock on the City Council. That’s just the nature of a legislative body. They deliberate, they engage the public, they pass laws and you need to have a legislative body. You also need the ability to make executive decisions.”

Because Frey’s proposal makes changes to the city charter, however, it will require City Council members to sign off. And though some council members are on board with Frey’s vision, others have reservations.

Ward 3 City Council Member Michael Rainville said he is comfortable with the options presented by the workgroup and the changes Frey has proposed. “I see the logic in it,” he said. “And the voters spoke loud and clear that the last City Council and mayor, their relationship was dysfunctional and it hurt everybody and now they want that relationship to be more like other major cities in America.”

Ward 13 Council Member Linea Palmisano also said that though what she knows so far of the proposal “looks generally good,” she is still waiting on more details and having conversations with her colleagues. Of those conversations, she said, “I think there is a lot of energy around putting all of the public safety functions in one place.”

Similarly, Ward 11 Council Member Emily Koski has said that while she wants to see the entire proposal before making a decision, she is excited about the idea of consolidating the city’s safety services. “I look forward to us building a more cohesive and comprehensive public safety system in the City of Minneapolis, and I look forward to seeing what will be included in the Department of Neighborhood Safety,” Koski said.

At least one council member, however, has questioned the need for Frey’s proposal. “Strong mayor has already been implemented so what the mayor is rolling out is a subset of other proposals that he imagines will best complement a strong mayor, which, again, has already been implemented,” said Ward 2 Council Member Robin Wonsley Worlobah. “That is something I think most of the public isn’t aware of.”

Wonsely Worlobah is concerned about the city creating another level of bureaucracy, “adding layers of mayor-appointed positions to guide a lot of the work of the city,” arguing that having a group of “unelected administrators carrying out a lot of the functions of the city” is undemocratic.

She also raised the potential for a conflict of interest for the city attorney, who would report directly to the mayor under Frey’s model but is still required to represent City Council interests.

The Charter Commission will then have to agree that the charter changes are appropriate and that they can be made by ordinance rather than decided by the voters. If that happens, the matter is sent back to the City Council, which will conduct a public hearing and then vote. To pass, all 13 council members must vote “yes.” After that, it goes to the mayor who can approve or veto the ordinance.

If the Charter Commission votes against forwarding the proposal, the mayor and City Council have to start over with a new proposal and agreement in concept.