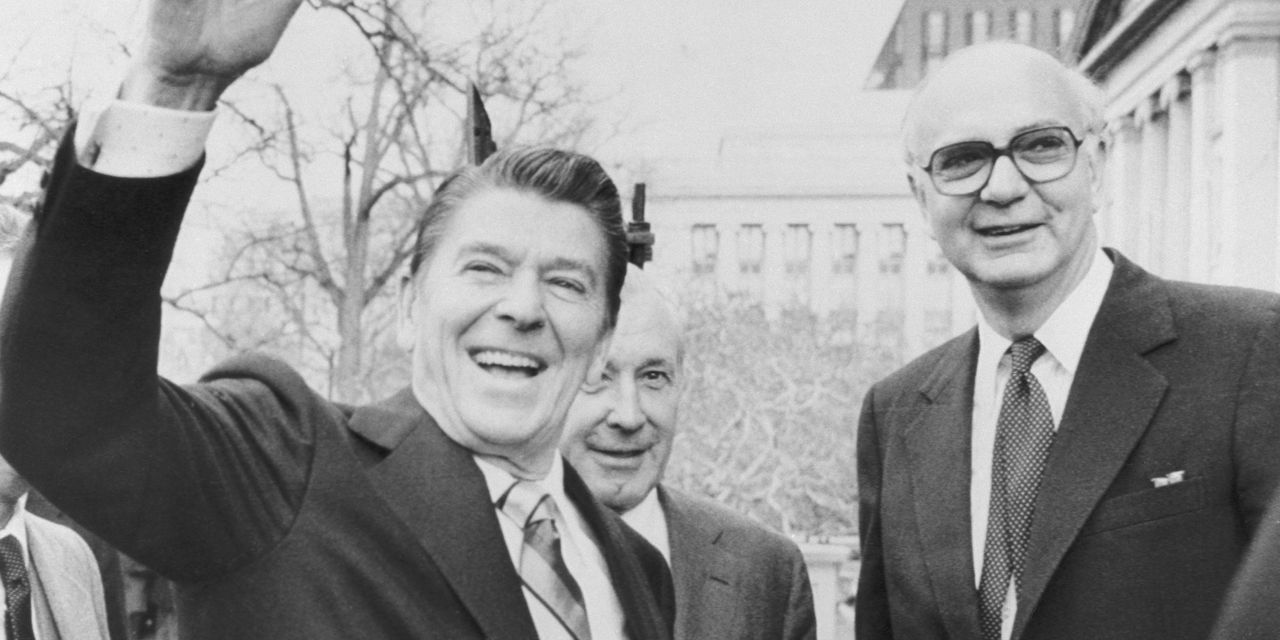 In December 1981 the Journal ran a contrarian op-ed by Mr. Rutledge, then president of the Claremont Economics Institute. It was the most prescient prediction by an economist I have ever read.

Mr. Rutledge predicted that inflation would decline faster than expected; that interest rates would fall, not rise, despite the growing deficit; and the economy and financial markets would not slump, but soar. It all happened.

How did he do it? He assumed the reverse of then current — and now resurgent — economic orthodoxy.

Pre-Reagan, orthodox economics — monetarist and Keynesian alike — assumed the answer to inflation was to control the money supply, which Keynesians called “aggregate demand.” Mr. Rutledge saw that the real supply of money was beyond government control. People, especially investors, were in charge.

He noted that throughout the Great Inflation, people had been rejecting dollars. No matter how many of those little scraps of paper government threw at them, people turned them into “stuff.”

Private investors especially, he argued, experienced inflation as a set of choices: “Should I buy a condominium, or should I put some money into a T-bill? Should I sell some shares of stocks to buy gold coins? ”

Over a decade, Americans cumulatively dumped dollars to acquire some $ 7 trillion in mostly unproductive stuff, always oddly described as “real assets.” That was more than double the entire annual stock of goods and services produced in the US back then.

Mr. Rutledge predicted that the combination of tighter money and lower tax rates — a paradox to the orthodox — would lure much of that $ 7 trillion back into financial markets. With real return on investment rising, people would value stuff less and investible capital more.

Households would become massive suppliers of credit to the economy. In a reversal of orthodox expectations, interest rates would plunge precisely as the demand for dollars rose. Inflation would decline as the supply of money increased.

That is what happened. Stocks, stagnant for a decade, took off and kept going for 20 years and beyond (with brief if dramatic interruptions). Employment boomed. Interest rates dropped relentlessly. Inflation never came back, until now.

President Reagan understood something neither party grasps today: that the value of the dollar is not a function of how many dollars government supplies but of how many dollars people demand. Money is supplied insofar as it is demanded by people who can put it to good use. Inflation arises when people have less use for money, which is why stagnation comes with it. Reagan beat inflation not by reducing the official money supply — M2 nearly doubled during his time in office — but by boosting demand for money.

The great lesson of the Reagan era is that money supply is determined by investment opportunity. Absent such opportunities, no matter how much money the government gives people, they will reject it and turn it into stuff.

Here is the radicalism of Reagan: Orthodox economics attempts to use both monetary and fiscal policy to manipulate the availability of dollars. Reagan used both to increase the utility of dollars.

He did not do it alone. In 1978 a bipartisan group in Congress turned President Carter’s proposed increase in capital-gains tax rates into nearly a 50% reduction, down to 28%. Reagan won a further cut in 1981, down to 20%.

The combination of high capital-gains taxes and inflation had devastated real rates of return on investment for a decade. Cutting the capital-gains rate might have done even more to boost the demand for money than Reagan’s 25% cut in regular income tax rates.

The impact of the Reagan reforms played out for decades because their effect was not a temporary boost in “aggregate demand” —the widely despised “sugar high” —but an accumulating shift of capital to people who repeatedly demonstrated they could use it productively.

The gradual but enduring impact of the Reagan policy also raises the tantalizing possibility that the 1982 recession was unnecessary. Given time, the tax cuts themselves might have conquered inflation without Fed Chairman Paul Volcker’s drastic tightening.

Today we are back to fighting inflation by letting the Fed strangle the economy. No leader from either party apparently understands what Reagan did. Joe Biden is out to lunch; Donald Trump is over the hill. Reagan’s City on the Hill still shines.

Mr. Vigilante writes The Next American Century at RichardVigilante.substack.com.