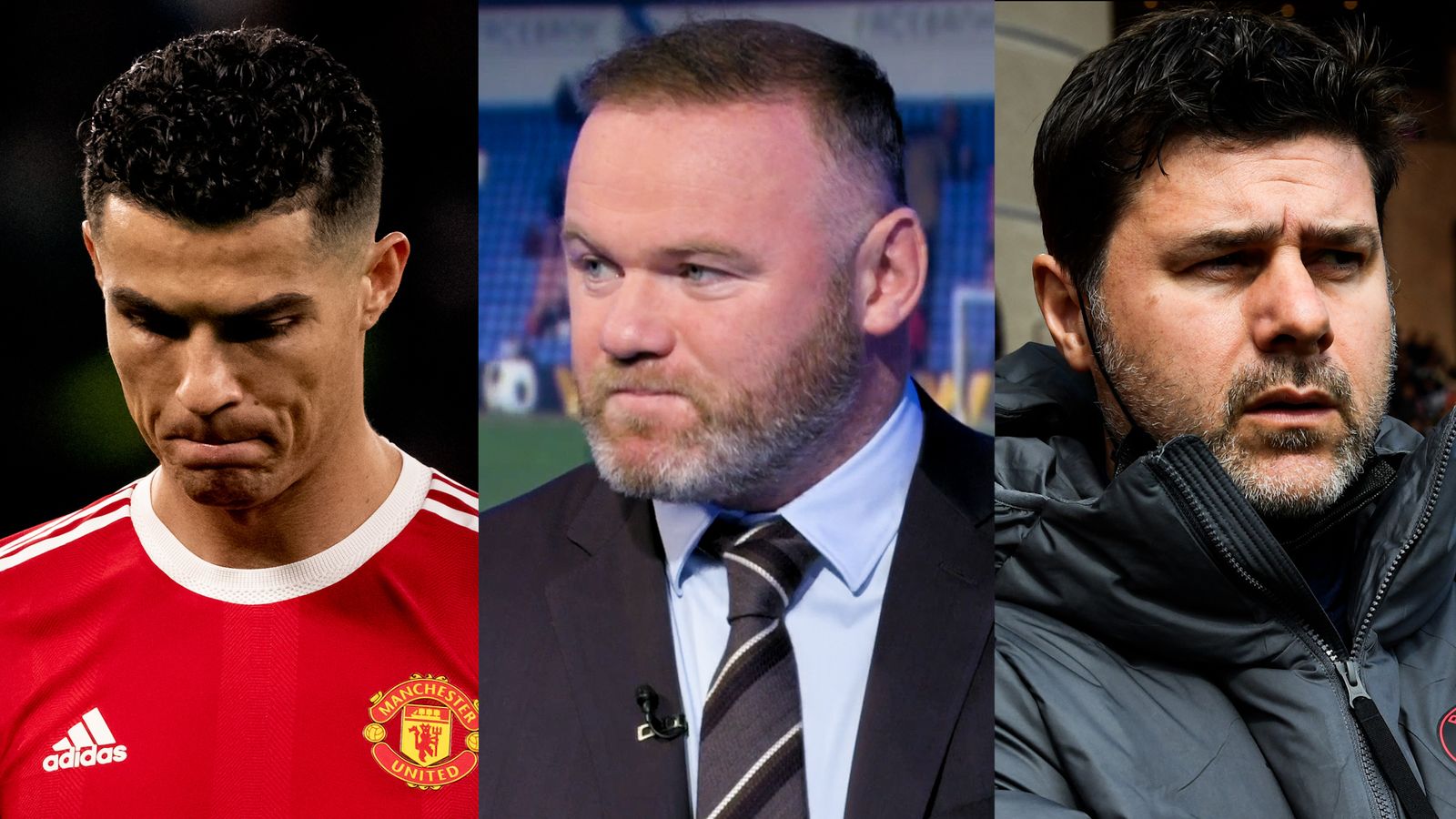 Wayne Rooney has tipped Mauricio Pochettino to become the next Manchester United manager, believing his Premier League experience and history of blooding youth places him ahead of Ajax boss Erik ten Hag.

Derby manager Rooney believes the new manager must overhaul the squad this summer, claiming the departures of Paul Pogba and Cristiano Ronaldo should be part of the upcoming rebuild.

The exit from Europe last month means the club are suffering their worst trophy drought in 40 years with United’s last piece of silverware being the Europa League triumph in 2017 under Jose Mourinho.

Speaking on Monday Night Football, Rooney covered a range of issues engulfing his former club at a time when United are still challenging to qualify for next season’s Champions League…

“It’s been a strange season,” Rooney told Sky Sports. “I’ve been to the ground to watch them live a few times and they look like a team of individuals. When they make a mistake it always looks very difficult for them to recover as a team.

“I can look at it and say it hasn’t been good enough as we have that group of players they need to be doing better. They’re going through a tough time as a club, and I think what everyone wants is for them to get the manager situation sorted as soon as possible, and they have to rebuild for the next two or three years to make sure they’re challenging again.”

Rangnick has suggested it could take 18 months or “two or three transfer windows” before United can challenge for the Premier League title again.

Rooney responded: “Absolutely. For Manchester United not to be challenging, I think they’d want the season to stop now and forget about the Champions League. They’re not going to compete in the competition as it stands even if they qualified for it.

“They have to rebuild the squad and everything around the first team and the club to make sure they put themselves in a position in two or three years’ time where they can actually go and challenge again for the Premier League.”

There has been plenty of speculation over who should take over at Old Trafford.

Speaking on MNF, Rooney shares his verdict on next week’s crunch game between title contenders Manchester City and Liverpool. He stated the Reds could quite possibly win at the Etihad, which seemed to please Jamie Carragher!

Ten Hag has refused to rule out the possibility of joining United and added that he hopes Ajax will understand if he decides to take the “next step” in his managerial career.

It has also been reported that United have sounded out Pochettino about becoming the club’s next boss.

Rooney believes Pochettino is better suited to taking over in the dugout when comparing the Paris Saint-Germain boss with Ten Hag.

“If I’m choosing from one of the two, that’s who I’d choose. He would need to be given time to place his blueprint on the club and on the team. If you give him time, I think he’d do well.”

‘Now’s the time for Pogba to move on’

Pogba’s contract expires at the end of the season and he looks set to lead a long list of departures at the club in the coming months.

Rooney stressed he would not stand in the Frenchman’s way.

“I think it’s got to a point where it’s probably better for him to move on. If Paul is honest with himself, he probably hasn’t had the impact he’d have liked since he returned to Manchester United,” he said.

“I watch him for France and he’s a completely different player. The ability, vision and control of the game is always there for France. It hasn’t quite worked at United for him, and there’s a few players they need to let go of.

“There hasn’t been a settled manager there since Sir Alex Ferguson so I think whoever comes in, they need to give them time to build relationships with players.

Andy Cole was surprised Rashford did not start against Leicester

“They were going through a transition period [under Ole Gunnar Solskjaer] and it didn’t work. It’s obvious it didn’t work with Ole in the end or with the manager now who’s come in, so I think Pochettino is a top manager. He knows how to work with top-class players but also with young players.

“They need to get that blend right as they can’t afford to fail again.”

‘Ronaldo is a goal threat but United need more’

Ronaldo was labelled a “genius” by Roy Keane after his spectacular hat-trick inspired Manchester United to a vital 3-2 victory over top-four rivals Tottenham – but the Portuguese missed last weekend’s draw with Leicester due to illness.

Ronaldo is United’s top goalscorer this term with 18 goals in all competitions but Rooney believes his return to Old Trafford has not been a success.

“You’d have to say no, at the minute,” he told Sky Sports when asked if he had experienced the desired impact.

“He’s scored important goals early on in the season in the Champions League and he’s scored the hat-trick against Tottenham but I think if you’re looking towards the future of the club, you have to go with younger, hungry players to lift United over the next two or three years.

“Cristiano is getting on a bit and he’s certainly not the player he was when he was in his 20s and that happens. He’s a goal threat but I think during the rest of the game, they need more.”

With Pogba and Ronaldo already listed as players to be moved on, Rooney was asked if there were others who should now be deemed surplus to requirements in the squad.

“I think Jesse Lingard should be playing for them as he brings energy and quality. Scott McTominay has done well so they’ve got good young players.

“They just have to get them confident and believing they’re good players performing at a better level. I’m sure the new manager will bring his own players in to try to get them rebuilding.”

Harry Maguire has struggled for form with his club, leading to the United captain being jeered by England supporters on international duty, but Rooney leapt to the defence of the under-fire centre-back.

“I like Harry,” the Derby boss continued. “He hasn’t been in his best form this season like a lot of players. When he plays for England, he looks like a world-class centre-back so a lot of it is confidence to get the feeling of winning again consistently.

“If United do that, I think Harry Maguire is a big part of it.”

Wayne Rooney expressed how hard a job it would be for anyone to replace Sir Alex Ferguson.

Rooney also reflected on the years of struggle for United since 2013, when Ferguson retired and the team won their last Premier League title…

“When Sir Alex retired, I think everyone knew it was going to be a very difficult job. David Moyes came in and it didn’t work out and from then, Louis van Gaal, Jose Mourinho, Ole Gunnar Solskjaer… we’ve had good managers but Manchester United is a different club to many clubs around the world. It needs someone to come in with that time to get that club back to where it deserves to be. It’s not going to happen if you keep changing manager every two years.

“Ferguson was like the godfather of the club, not just the players but the staff, the academy, he was on top of everything. When you lose someone like that from the club, someone else is coming in and it’s a massive change. For David Moyes I always thought, ‘this is an impossible job to come in and replace Alex Ferguson’. He signed for six years and they were trying to give him that time to do it but it didn’t work out.

“When [Ferguson] left everyone at the club was quite down a little bit. Even though we won the Premier League in that season. The people in power and certainly the more senior players who were left at the club knew this was going to be a big challenge.

“[Ferguson] is still involved in some way and you see him at the games and that naturally will bring a pressure to whatever manager goes in there. But if you want to manage Manchester United you have to do it your way and make the decisions.”

Rooney aiming to manage Man Utd or Everton one day

Could Rooney eventually be a Manchester United manager himself? He believes so. And is also targeting the manager’s job at his boyhood club Everton one day…

“There are two clubs: Everton and Manchester United. I’m an Everton fan, I was at Man Utd for 13 years. I feel if I keep doing what I’m doing, keep learning, keep improving, those two clubs one day in the future I’d love to go and manage.

“I understand when Frank Lampard went to Chelsea, it’s so difficult to say no. But when you go into one of these big clubs you need to make sure it’s the right time and you’re able to develop and take that club forward.

“I got approached by Everton to interview for the manager’s job but I’m in a job, I’m still learning and I felt it wasn’t the right time.”

Get all this and more – including notifications sent straight to your phone – by downloading the Sky Sports Scores app and setting Man Utd as your favourite team.

Hear the best Premier League reaction and expert analysis with the Essential Football and Gary Neville podcasts, keep up-to-date with our dedicated Transfer Centre, follow the Sky Sports social accounts on Twitter, Instagram and YouTube, and find out how to get Sky Sports.