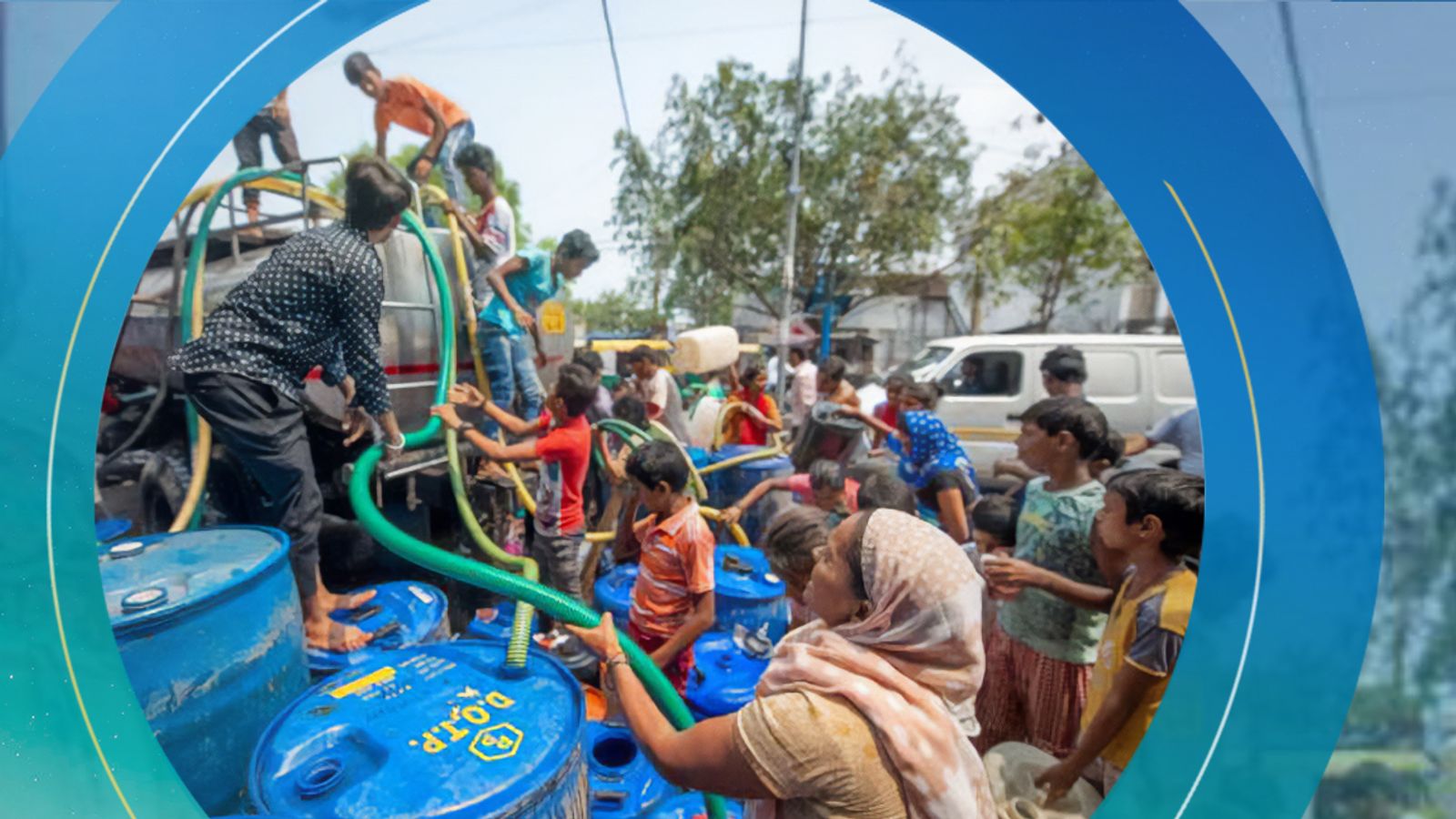 Urban centers around the world including London are in increasing danger of running out of fresh water, as growing populations and climate change put even greater stress on resources, Christian Aid has warned.

The impact of climate change on cities will become more acute as more people live in them, partly driven by the climate crisis itself as it eats up coastlines and livelihoods, the international development charity’s new report suggests.

The charity’s chief, Patrick Watt, told Sky News that with people queuing for water in the Indian capital New Delhi and a rationing plan in the Chilean capital Santiago, this is the moment to “[sound] the alarm “- but he said” there is still time to take action “.

Already more than half (55%) the world’s population lives in cities. By 2050, that figure will rise to two thirds (68%), the United Nations has projected.

Despite covering more than 70% of the earth’s surface, only 3% of the world’s water is drinkable, and much is locked in glaciers and ice caps.

Global water use grew by more than twice the rate of population increases during the 20th century, Christian Aid’s research suggests.

It warned that water could be a trigger, weapon and a casualty of conflict, citing Ukraine’s diversion of water supply to Crimea after Russia annexed it in 2014.

When water is in short supply, it is “the poorest people that suffer the most”, the researchers say, but “even in rich countries like the UK the authorities are struggling to deal with the impact of the climate crisis”.

In the rainy UK, we think of flooding as the “main impact” from climate change, meaning “water scarcity is sometimes overlooked,” Mr Watt said. “But it’s going to become a bigger problem.”

An EA spokesperson told Sky News climate change is “posing increasing risks to the quantity of water available”. It plans to “transform the way we use and look after England’s water supplies” and secure resilience.

People in England will have to reduce their current water use from 140 liters a day on average to 110 to keep supply and demand in line, as climate change alters temperatures, evaporation and the demand for water from plants, the EA estimates.

“If it’s bad for us here, it’s even worse for people closer to the equator,” said Mr Watt.

In New Delhi, the city already struggles to supply its inhabitants with drinking water, and climate change “will only worsen an existing water crisis created by population growth and the depletion of groundwater supplies for irrigating crops,” the report warns.

Record temperatures and low rain since March have driven India to burn more coalas a surge in air conditioning has sparked a power crisis.

Christian Aid has renewed calls for rich countries to send cash to help poorer countries – who typically have polluted the least – to cope with those impacts of climate change that are beyond adaptation. For example, in Bangladesh, thousands of migrants are fleeing to the capital Dakhar as rising sea levels wash away homes and incomes.

The idea of ​​a fund for so-called “loss and damage” is extremely contentious, with rich countries reluctant to put a number on the costs for which their pollution is responsible. It will be back on the table at this year’s United Nations climate talks COP27, hosted by Egypt during Africa’s turn to host the talks.

He urged leaders to go to COP27 equipped with “plans to cut emissions and provide the finance and support to help communities facing drought”.

The show investigates how global warming is changing our landscape and highlights solutions to the crisis.