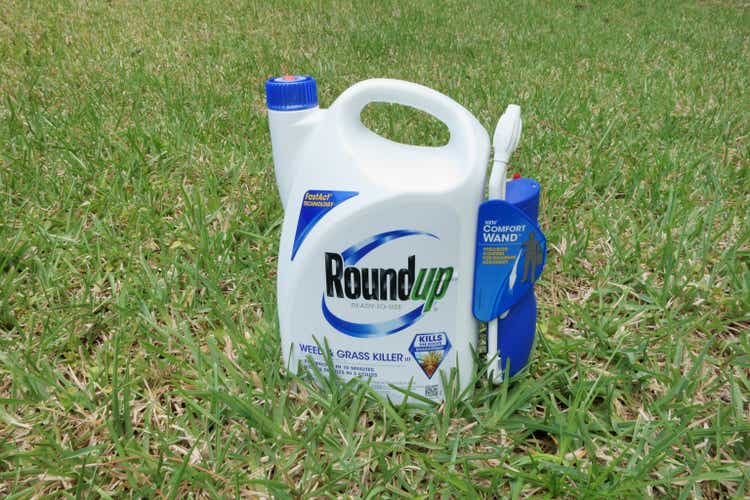 Investors should pay close attention to Bayer (OTCPK: BAYRY) as soon as Monday as the Supreme Court is set to decide if it will take up its case over a $ 25 million verdict concerning Roundup weedkiller litigation.

The Supreme Court is expected Monday to say if it will hear the Bayer (OTCPK: BAYRY) case, decide not to take up the case, or the court could say nothing, which may mean that will make a decision in another week.

The Roundup litigation is extremely important to Bayer (OTCPK: BAYRY) as the company has already earmarked $ 16 billion in total to deal with the litigation, which the company inherited after it acquired Monsanto in 2018 for $ 63 billion. Bayer announced in August it filed a petition to the Supreme Court to review and reverse court verdicts that awarded damages in which a plaintiff said Monsanto’s Roundup weedkiller caused cancer.

“The $ 16 billion reserve Bayer’s taken to deal with current and future Roundup cases likely is too high, given our belief that the Supreme Court will grant Bayer’s petition for review and rule in the company’s favor, likely resulting in Bayer paying a maximum of about $ 13 billion, “according to Bloomberg Intelligence analyst Holly Froum.

If the court intends to take the case, it will likely make the decision on June 21, Froum wrote. If the Supreme Court intends to grant a review it will typically “conference” the case more than once, which in reality means pushing his case to June 21 from Monday.

Bayer suffered a setback in its bid to bring the case to the Supreme Court last month when the Biden administration urged the Supreme Court to reject the German company’s plea to hear the case. The US Solicitor General made the request, which sent Bayer’s ADRs down about 8% on May 11.

Bayer (OTCPK: BAYRY) has asked the Supreme Court to find that federal approval of Roundup’s product label by the Environmental Protection Agency meant the suit could not be brought forward under California state law.

The plaintiff’s lawyers are urging the Supreme Court not to hear the case, saying the jury award is consistent with a 2005 Supreme Court ruling that allowed state-law suits as long as state warning requirements are “genuinely equivalent” to those under the Act.

Credit Suisse analysts have said that they see a low probability of the case being heard, noting the Court accepts less than 1% of petitioned cases.

“We think the Supreme Court will review and reverse a $ 25 million judgment against Bayer for failure to warn that Roundup causes cancer, though the odds are heavily stacked against the company,” Froum wrote.

If the Supreme Court does decide to take up the case, it will hear the arguments in Q4 and will likely rule in Bayer’s favor in the first half of next year, according to Froum’s analysis.

Bayer (OTCPK: BAYRY) had a small victory on Friday when a Missouri court ruled in its favor in a trial regarding claims that its Roundup weedkiller causes cancer, which marked a third consecutive court victory for the company in the US