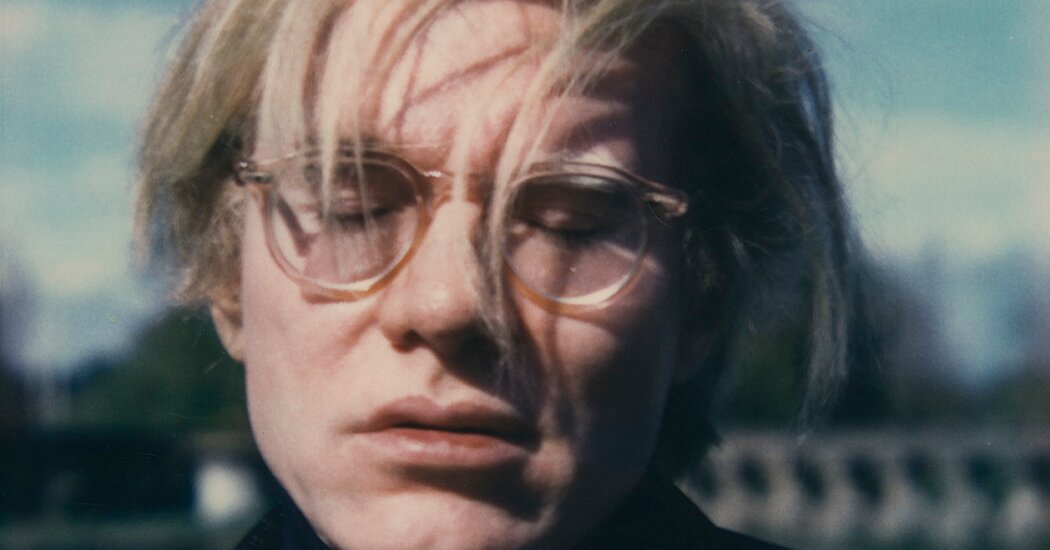 Andy Warhol left behind a lot of self portraits.

There was the black-and-white shot from a photo booth strip, from 1963, in which he wore dark black shades and a cool expression. In 1981, he took a Polaroid of himself in drag, with a platinum blond bob and bold red lips. Five years later, he screen-printed his face, with bright red acrylic paint, onto a black background. These and other images of the Pop Art master rank among his best-known works.

But one of his most telling self portraits was not a portrait at all, in a conventional sense. Between 1976 and 1987, the artist regularly dictated his thoughts, fears, feelings and opinions – about art, himself and his world – over the phone to his friend and collaborator Pat Hackett. In 1989, two years after his death, Hackett published “The Andy Warhol Diaries,” a transcribed, edited and condensed version of their phone calls.

And now, more than three decades later, “The Andy Warhol Diaries” has come to Netflix as a bittersweet documentary series directed by Andrew Rossi. In a video interview, the director pointed out that Warhol had intended for the book to be published after he died.

“It does seem like there’s some message which maybe he himself did not even understand,” Rossi said. “There’s an open invitation to interpret it as there is with any of his artwork – because I do view the diaries as another self portrait in his oeuvre.”

Warhol’s cultural prominence has hardly diminished in the decades since his death, in 1987. His fascination with branding and celebrity, as well as the famous dictum often attributed to him – “in the future, everyone will be world-famous for 15 minutes” – are if anything even more relevant in the age of social media and reality TV.

“There’s a reason why ‘Warholian’ remains a description,” Rossi said. “He’s one of the few artists who has transcended his persona and become a part of the language and the cultural fabric.”

But if Warhol seems particularly ubiquitous right now, that’s because he is – onscreen, onstage, in museums and in the streets. Earlier this month, Ryan Raftery returned to Joe’s Pub with the biting celebrity bio-musical “The Trial of Andy Warhol.” Anthony McCarten’s new play in London, “The Collaboration” – which centers on the relationship between Warhol and Jean-Michel Basquiat – is already being adapted for the big screen. The Brooklyn Museum exhibition “Andy Warhol: Revelation” investigates his Catholic upbringing. And starting Friday, Bated Breath Theater Company will bring the theatrical walking tour production “Chasing Andy Warhol” to the streets of the East Village.

Together, the works create a kaleidoscopic portrait of the human beneath the white wig. Even as he created an indelible, internationally famous identity, this child of Carpatho Rusyn immigrants, Ondrej and Julia Warhola, grappled with his faith (Byzantine Catholic) and his sexual orientation (gay, but never quite as out as many of his contemporaries) – areas that both “The Andy Warhol Diaries” and “Andy Warhol: Revelation” explore in particular.

A significant portion of the Netflix series examines Warhol’s romantic relationships. It delves into Warhol’s struggles to show his love for his first long-term partner, an interior designer named Jed Johnson. Later comes the preppy Paramount executive Jon Gould, whom Warhol showered with affection but who eventually died of AIDS.

The Enduring Legacy of Andy Warhol

The artist’s cultural prominence has hardly diminished in the decades since his death in 1987.

Jessica Beck, a curator at the Andy Warhol Museum in Pittsburgh, was interviewed in the documentary series. Rossi found her through her work on the 2018 Whitney Museum exhibition “Andy Warhol – From A to B and Back Again,” for which she wrote an essay titled “Warhol’s Confession: Love, Faith and AIDS.”

Beck pointed to pieces of Warhol’s “Last Supper” series, some of which are currently on view in “Andy Warhol: Revelation.” She referenced one painting in particular, “The Last Supper (Be a Somebody With a Body),” which fuses an image of Jesus Christ with that of a bodybuilder, a symbol of health and masculinity. Beck said the work reflects Warhol’s reactions to the AIDS epidemic.

“When you have these two things juxtaposed, you have this real expression of ideas around mourning and suffering, but also forgiveness,” she said.

“Andy Warhol: Revelation,” which opened in November and runs until June 19, is broken into seven sections that move visitors from the artist’s immigrant upbringing and the roots of his religion through the different phases of his life and career, with a particular focus on the tension between his faith and his queer identity.

“This is beyond soup cans and Marilyn,” said José Carlos Diaz, the chief curator of the Andy Warhol Museum, referring to a few of Warhol’s Pop Art hits. Diaz first put on “Revelation” at the Warhol museum before bringing it to Brooklyn.

Carmen Hermo, an associate curator at the Brooklyn Museum, organized the New York presentation of “Revelation.” Both she and Diaz are the children of immigrants, like Warhol, and she speculated that this part of the artist’s background helped to account for his famed work ethic and his fierce drive to create the best version of himself.

Diaz said, “For me, he lives the American dream,” adding that more nuanced, relatable perspectives on the artist were finally “surpassing this mythological Warhol with the big glasses, big wig.”

Across the East River, Mara Lieberman, the executive artistic director of Bated Breath Theater Company, is using her fair share of glasses and wigs. Beginning Friday, Lieberman will direct “Chasing Andy Warhol,” a theatrical tour through the East Village in which multiple actors play the artist simultaneously, alluding to his love for repeated images and various personas.

One scene depicts something that happened on a trip Warhol took to Hawaii with production designer Charles Lisanby, with whom he was in love at the time. A couple of days after arriving at the hotel, Lisanby brought another man back to the room, and Warhol exploded, hurt – an event that has been described in biographies of the artist.

Warhol has said that he later realized the power of saying “so what” in response to painful life events, an insight he detailed in his book “The Philosophy of Andy Warhol.” It is, Lieberman said, “his greatest coping strategy.”

This attitude was a key ingredient – along with his ideas about identity, technology, celebrity and more – in Warhol’s “highly stylized, constructed, brilliantly strategized brand,” Lieberman said.