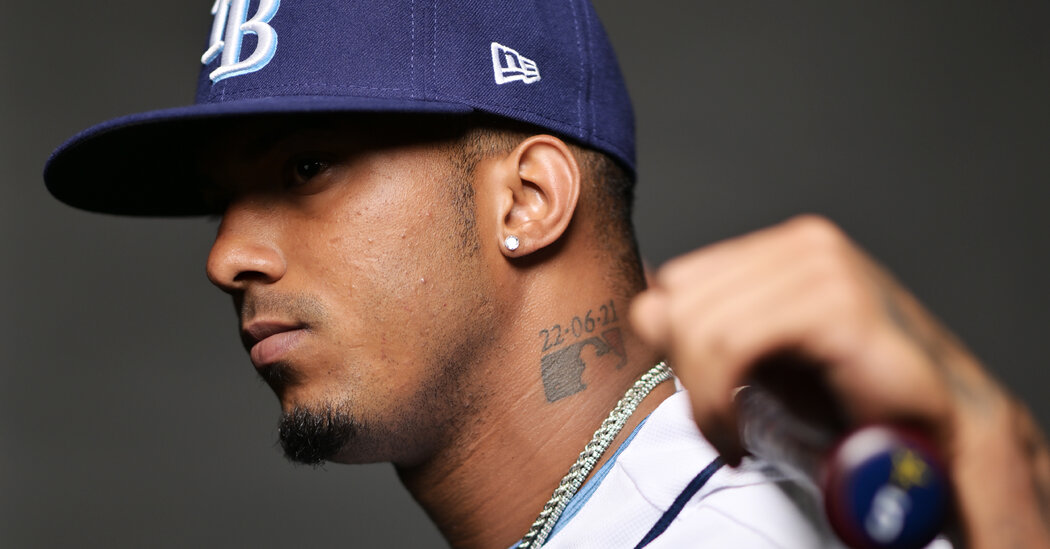 PORT CHARLOTTE, Fla. – The first thing you notice, up close to Wander Franco, is a tattoo of the Major League Baseball logo on the left side of his neck. Franco already had it last June 22, when he made his debut for the Tampa Bay Rays, as if he were pre-certified for stardom. Over the winter, he got the date inked above the emblem.

Consider it a handy reminder – thousands of times across the next 11 seasons, the Rays hope – of Franco’s self-confidence and the way he backed it up that very first night. He fouled off the first two pitches he saw, then drew a walk. He later drilled a three-run homer and doubled. He took 10 swings, connected nine times, and did not strike out.

In an age when many hitters are willing to sacrifice contact for power, Franco, who turned 21 this month, takes a more logical approach.

“Well, if you want to hit a home run, you’ve got to make contact,” he said, through a Spanish-language interpreter, in the Rays’ spring training clubhouse last week. “So in my head, I know if I can make contact, good things are going to happen.”

The Rays are counting on a lot of good things for a lot of years. In November, they signed Franco to an 11-year, $ 182 million contract (with a club option for 2033), the richest deal in major league history for a player with less than a year of service time. It was a staggering commitment for a franchise that has never had an annual payroll of $ 80 million as it enters its 25th season.

The MLB Lockout Comes to an End

Franco was 7 years old, at home in the Dominican Republic, when his uncle, Willy Aybar, played for Tampa Bay in the 2008 World Series. The family television lost power during one of the games, Franco remembered with a laugh, so he could not watch the whole series, which Philadelphia won in five games. But he got the idea: The Rays were very good, and would consistently remain so.

Starting with that 2008 season, the Rays have won more games than the Boston Red Sox and appeared in more World Series than the Yankees. They signed Franco for $ 3,825 million in 2017, when he was 16 years old, and formed a strong bond as a basis for the long-term deal.

“There’s a lot of communication amongst everybody, the development from the players in the minor leagues is amazing and the way they go about their business is great,” Franco said. “They’ve always given me that opportunity and supported me.”

The Rays started tracking Franco when he was 14. Carlos Rodriguez, a vice president for baseball operations who was the director of international scouting, was drawn to Franco’s loose, whip-like swing from both sides of the plate. Yet when Rodriguez picked up Franco’s bat, it felt heavy for a young teenager, a man’s bat – 33 or 34 ounces, he guessed.

That was a good sign, Rodriguez thought, as was Franco’s pedigree. Franco’s mother, Nancy, has two major league brothers: not just Willy Aybar but also Erick, who played 12 seasons in MLB Franco’s father, also named Wander, played professionally but did not make the majors. He named his sons Wander in hopes that one would make the name famous, and while two older boys – Wander Alexander and Wander Javier – played in the minors, the youngest, Wander Samuel, was destined to break through.

At times, Rodriguez said, the kid’s talent would actually work against him. Yes, he could spoil good pitches by flicking them foul, but he had to learn which pitches to take.

“Because his bat-to-ball skills were so good, sometimes he would hit a ball way out of the zone or way down that other players would just swing through,” Rodriguez said. “So that kind of hurt his average, to some degree, because those were the outs that pitchers wanted him to make.”

Franco figured it out quickly: In 948 minor league plate appearances, hit .331 and had more extra-base hits (95) than strikeouts (75). He distilled his hitting philosophy this way: “Really make sure you see a pitch you want to hit, not just swing at balls,” he said. “Look for a pitch you want to hit and get the hands through to make good contact.”

As a rookie, Franco hit .288 with a .347 on-base percentage and a .463 slugging percentage, helping the Rays to 100 victories, the most in the American League. He struck out only 37 times in 308 plate appearances in the regular season, then homered twice and went 7 for 19 in a four-game division series loss to Boston.

According to MLB.com, from the date of Franco’s debut through the end of the regular season, he struck out against fastballs less often than two-thirds of all major league hitters. Against breaking balls, he struck out less often than 95 percent of hitters, and against off-speed pitches (changeups and splits), he had the lowest strikeout rate in the majors.

Adapting so seamlessly to major league pitching – at 20 years old, with only 40 games above Class A – was astounding.

“Most human beings, you need drill packages and you need time to make these adjustments, and that’s what I thought was going to happen,” said Chad Mottola, the Rays’ hitting coach. “But he’s the type of guy, if you tell him once, or he sees a certain pitch once, he’s like, ‘That’s not going to beat me again.’ Your whole career, your whole life, you’re like, ‘OK, it’s good to have confidence, but it’s going to take a little time.’ Whereas he goes, ‘OK’ – and it really happens. “

Mottola was a top prospect once, the fifth overall pick in the 1992 draft, one spot ahead of Derek Jeter. Coaches insisted he change his swing, Mottola said, and he lost his way as a hitter. Beaten down by the game, he batted .200 in 125 intermittently at bats.

As a coach, Mottola said, he offers only suggestions, not demands. With a pupil like Franco, though, there is not much to say. Maybe, he said, the lesson is that a simple approach is best. Or maybe Franco is meant to be savored more than studied, the kind of person who inks his destination on his skin, marks the moment he got there and looks like he may never leave.

“His mentality as a person makes it all come together,” Mottola said. “He’s genuinely having fun. The innocence he brings, which we all had before this game ruined it, he’s kept it. He signed this big contract and he kept it all. That’s the fun part for all of us: watching a kid play a game, where the rest of us are trying to survive this mess. ”