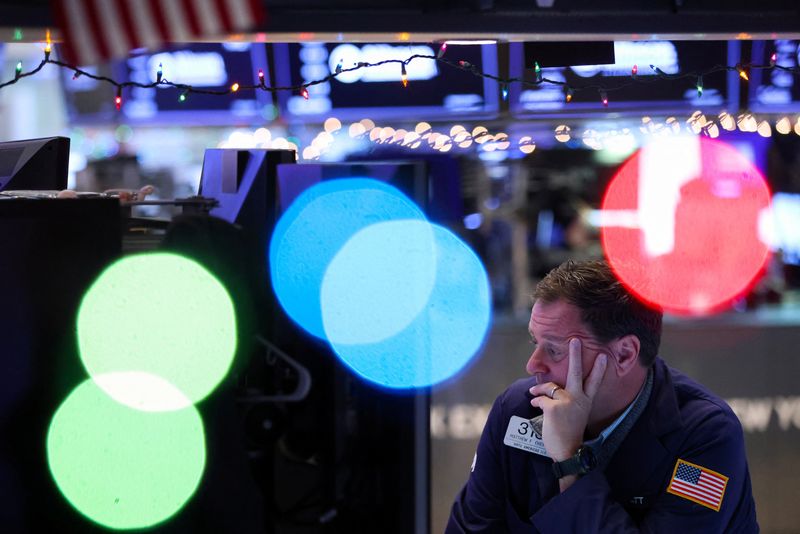 NEW YORK (Reuters) – U.S. stocks dropped for a third straight session and suffered a second straight week of losses on Friday as fears continued to mount that the Federal Reserve’s campaign to arrest inflation would tilt the economy into a recession.

Equities have been staggered since the U.S. central bank’s decision to raise interest rates by 50 basis points (bps), as expected. But comments from Fed Chair Jerome Powell signaled more policy tightening, and the central bank projected that interest rates would top the 5% mark in 2023, a level not seen since 2007.

Further comments from other Fed officials fueled the concern. New York Fed President John Williams said on Friday it remains possible the U.S. central bank will raise rates more than it expects next year. The policymaker added that he does not anticipate a recession due to the Fed’s aggressive tightening.

In addition, San Francisco Federal Reserve Bank President Mary Daly said it is “reasonable” to believe that once the Fed’s policy rates reached their peak, they could stay there into 2024.

“It feels as if finally the market is starting to understand that bad news is bad news, and that is what is starting to occur. Since the October bottoms, the market has continued to price in what I would consider a substantial amount of optimism at the fact the Fed could navigate and pilot a successful soft landing,” said Dave Wagner, equity analyst and portfolio manager for Aptus Capital Advisors in Cincinnati.

“Finally, the market is taking into consideration that bad news should mean bad things for the market.”

Money market bets show at least two 25 bps rate hikes next year and a terminal rate of about 4.8% by midyear, before falling to around 4.4% by the end of 2023.

On the economic front, a report showed U.S. business activity contracted further in December as new orders slumped to their lowest level in just over 2-1/2 years, although easing demand helped cool inflation.

The prospects of a “Santa Claus rally”, or year-end uptick, in markets this year have dimmed, as the majority of global central banks have adopted tightening policies. The Bank of England and the European Central Bank were the most recent to indicate an extended rate-hike cycle on Thursday.

Markets pared losses in the last hour of trading, however, possibly due in part to the simultaneous expiration of stock options, stock index futures and index options contracts, known as triple witching, which can exacerbate market volatility.

Volume on U.S. exchanges was 17.28 billion shares, compared with the x.xx billion average for the full session over the last 20 trading days.

Declining issues outnumbered advancing ones on the NYSE by a 2.47-to-1 ratio; on Nasdaq, a 1.66-to-1 ratio favored decliners.