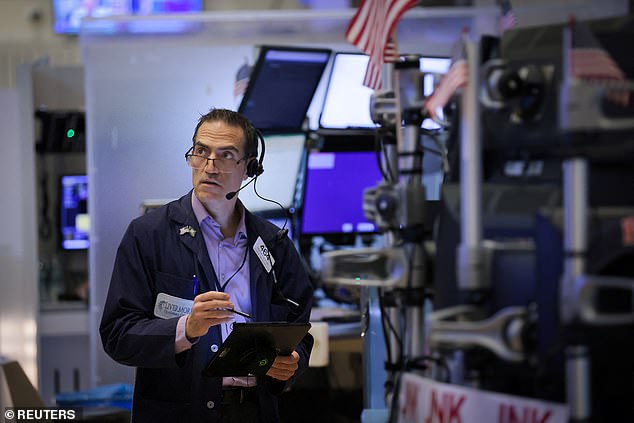 Bonuses for Wall Street bankers are projected to plunge as much as 45 percent this year as business dries up due to inflation following a decade of record highs.

Payouts for investment bankers who underwrite deals will probably drop 40 to 45 percent this year, while incentive compensation for those advising on transactions is estimated to fall 20 to 25 percent, according to data from the compensation consultancy firm Johnson Associates.

‘People thought this might be a more normal year after 2021 but they didn’t expect to see it go so far the other way,’ Alan Johnson, of Johnson Associates, told The Post. ‘This is one of the top two worst years we’ve seen in the last decade.’

While investment bankers have come under pressure from turmoil in financial markets, their counterparts in trading have benefited from a surge in volatility and client activity.

Fixed income traders and salespeople will, however, probably get pay bumps of 15 to 20 percent, while bonuses for stock traders could rise 5 to 10 percent, according to the report.

Bonuses for financers, especially those in investment banking who underwrite deals, will probably drop 40 to 45 percent this year, while those of transaction advisers are estimated to fall between 20 and 25 percent

After many banks on Wall Street made record gains in 2021, mergers, acquisitions and IPOs have dried up in the first half of this year, contributing to cuts in bonuses

Quarterly GDP growth is seen over the past four years, showing the pandemic recession in early 2020 and the current contraction cycle

The consumer price index hit a four-decade high of 9.1 percent in June — an astounding level of inflation for an economy that was apparently shrinking

Bankers at Morgan Stanley are, too, complaining about how small their bonuses are — after they raked in between $40,000 and $45,000.

One banker wrote: ‘What the f*** is this s***??? Why would anybody choose to take such af***ing ENORMOUS discount.

Meanwhile, another added: ‘That’s as*** bonus for what’s supposed to be a top bank.’

Other users on the financial forum mocked the bankers for whining about the bonuses, which are close to the average annual salary for Americans. The average salary across the country is $53,000, according to the US Bureau of Labor Statistics.

Bankers at one of the biggest firms on Wall Street have been complaining about how small their bonuses are — after they raked in between $40,000 and $45,000 (File image)

Other than considering decreases in bonuses, Wall Street bosses are also in a bind about whether to cut investment bankers or to keep them on staff in hopes of signs of recovery from a brutal first half.

‘Headcount will decrease as firms scale back after increasing headcount in 2021 and into 2022,’ Johnson, the managing director at Johnson Associates, said.

With risks of a recession looming and the Federal Reserve raising rates aggressively to stem inflation, prospects for arranging and financing deals have dried up.

Some banks are continuing to add staff, but the momentum has slowed from last year’s frenetic pace and some expect cuts to be inevitable. While executives at US banking giants said market activity could bounce back after the first-half slump, it will probably be modest compared with a record year for transactions in 2021.

Government stimulus and low interest rates set off a gusher of deals as companies rejigged their businesses last year, propping up bank divisions that advise corporations.

Russia’s invasion of Ukraine and significant monetary tightening have led to volatile trading on Wall Street. While that can help trading volumes, it however slowed initial public offerings (IPOs) and deals led by special purpose acquisition companies (SPACs).

‘IPOs are scarce, and SPACs are now about non-existent,’ Stephen Biggar at Argus Research told Reuters in June.

The Fed has raised interest rates rapidly in 2022, going from near zero to a target range of 2.25 to 2.5 percent, in a bid to tackle rising inflation – but higher borrowing rates also put the brakes on economic growth

The economy has been adding jobs at a steady pace even as GDP shrinks, which some analysts point to in arguing that the economy is not in a recession

Two quarters of shrinking GDP are pointing towards the direction of a recession, but the Biden administration has denied these claims, saying a panel of economists must first officially declare that the economy is no longer expanding.

Republican critics accused the administration of flying in the face of reality, with House Minority Leader Kevin McCarthy saying in a floor speech: ‘You would rather redefine a recession than restore a healthy economy.’

The Commerce Department confirmed in a report in July that US gross domestic product (GDP) shrank 0.9 percent in the second quarter, following a decline of 1.6 percent decline in the first quarter.

Republican critics accused the administration of flying in the face of reality, with House Minority Leader Kevin McCarthy saying in a floor speech: ‘You would rather redefine a recession than restore a healthy economy.’

Earlier in July, UK-based bankers at Barclays had similar complaints, suggesting the financial sector might be gearing up for some tighter bonuses.

July’s report on GDP from the Bureau of Economic Analysis is an advance estimate that is likely to be revised in the coming months.

The report pointed to weakness across the economy, noting that consumer spending slowed as Americans bought fewer goods.

Partially offsetting those declines were increases in exports and consumer spending, the report said.

Rep. Kevin McCarthy (R-California) shared a poster in July that he says shows Biden blamed everything other than his policies for the down-turning economy, including COVID, Putin and supply chain issues

For months, the US economy has been sending conflicting signals that have baffled economists and policymakers.

Inflation has continued to soar even as growth slows, conjuring dark memories of ‘stagflation’ in the 1970s.

The labor market is strong, with far more job openings across the country than there are people seeking work. It’s a situation that should drive strong wage growth, but wages have failed to keep pace with inflation.

And consumers, whose spending accounts for nearly 70 percent of economic output, are still spending strongly, although at a slower pace.

What is GDP? How the government measures the economy

Gross domestic product, or GDP, is a measure of the total market value of all goods and services produced within the United States.

The Bureau of Economic Analysis uses real GDP, which is adjusted for inflation, for its quarterly report on economic growth.

The agency’s formula for GDP adds together four elements: consumer spending, business investment, government spending, and net exports (exports minus imports) to arrive at a total.

The formula for GDP does not include volunteer services or illegal activities.