Viktor Bout, the arms dealer Russia has swapped for Brittney Griner By Reuters 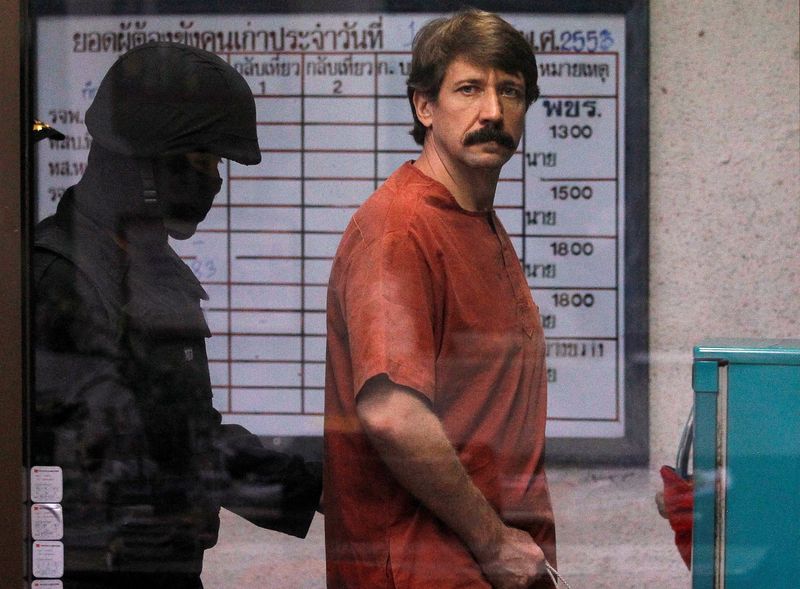 © Reuters. FILE PHOTO: Alleged arms smuggler Viktor Bout from Russia is escorted by a member of the special police unit as he arrives at a criminal court in Bangkok October 4, 2010. Thailand’s criminal court held a hearing today on a second case lodged against Bout.

(Reuters) -U.S. basketball star Brittney Griner was freed from jail in Russia on Thursday in exchange for the release of Viktor Bout, a Russian arms dealer jailed in the United States, according to U.S. and Russian officials.

Here are some key facts about Bout:

– He became one of the world’s most wanted men during his career as an international weapons dealer, and was dubbed “the Merchant of Death” in a 2007 biography. He became notorious for his willingness to arm almost anyone, from militias in Sierra Leone, to Charles Taylor’s brutal Liberian regime, to the Taliban. His life helped inspire the 2005 Hollywood film “Lord of War” starring Nicholas Cage.

– Born in Dushanbe, Soviet Tajikistan, in 1967, Bout is reported to be fluent in several languages and to have served in the Soviet army as a military translator, including in Angola. He has said he attended a Moscow language institute that serves as a training ground for military intelligence officers.

– After the 1991 collapse of the Soviet Union, he was able to capitalise on a glut of cheap, Soviet-made weaponry that could be sold to customers in Africa, Asia and South America. Operating out of the United Arab Emirates, he used a fleet of Soviet-era planes to supply guns to insurgencies, warlords and rogue states around the world.

– Bout was arrested in 2008 in Thailand after a sting operation by U.S. agents who recorded him offering to sell missiles to people he believed were leftist Colombian guerrillas.

– In 2012, he was given a 25-year prison sentence by a U.S. court on multiple charges related to his arms dealing career. Russia has always proclaimed his innocence, describing his case as a glaring injustice and attempting to secure his release.

The people who hate Sam Bankman-Fried the most