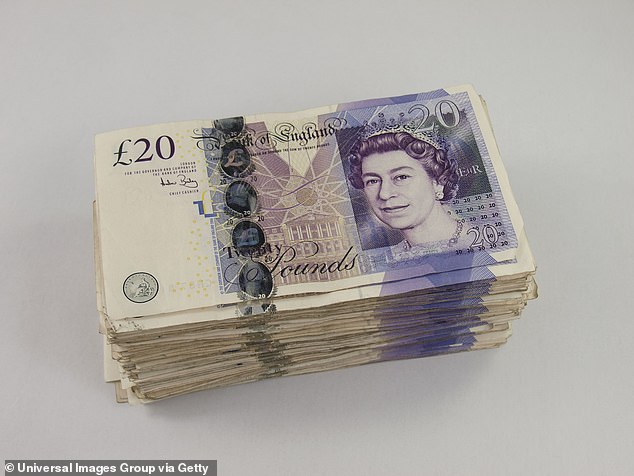 By Chay Quinn For MailOnline

Shoppers are in a race against time to spend £ 19bn of paper £ 20 and £ 50 notes – because shops will stop accepting them in six months.

The paper bills have been swapped for plastic replacements over the past two years to improve security.

The old £ 5 and £ 10 paper notes have already been discontinued

The Bank of England, pictured, said the paper notes retain their face value for all time despite the changes

That number is down from £ 24bn in circulation reported in September last year.

The £ 50 note featured a graphic of Alan Turing, the cryptographer at Bletchley Park who was credited with breaking the German Engima code to help the Allies win the Second World War.

The deadline to use them is September 30 when they will no longer be legal tender and will be rejected in shops.

– A large see-through window with a blue and gold foil on the front depicting Margate lighthouse and Turner Contemporary.

– A smaller see-through window in the bottom corner of the note, inspired by Tintern Abbey.

– Turner’s self-portrait, painted in around 1799 which is on display in Tate Britain.

– A metallic hologram which changes between the word ‘Twenty’ and ‘Pounds’ when the note is tilted.

– The Queen’s portrait in the see-through window with ‘£ 20 Bank of England’ printed twice around the edge.

– A silver foil patch with a 3D image of the coronation crown.

– A purple foil patch containing the letter ‘T’ and based on the staircase at the Tate Britain.

The Bank of England says it will continue to swap old notes for their face value.

It comes after £ 5 and £ 10 notes were replaced over four years ago.

Shoppers can post old notes to the BoE in London or deposit them at their local bank.

The bank notes include several newer security features including a change to the holograms which displays the text ‘Twenty Pounds’ and a see-through window with a graphic of Big Ben.

They also display the amount in a checkered color when placed under an ultraviolet light.

When the plastic notes were first brought in with the newest iteration of the £ 5 note, drug users claimed the note was cutting their noses when they snort cocaine.

The ‘indestructible’ polymer notes are difficult to tear and can survive being put through the washing machine and other spills.

The banknotes are resistant to dirt and moisture, helping it to stay in better condition for longer and it is hoped each note will last up to three times longer than the previous paper versions.

The Bank has wrung in the changes to its iconography in recent years, including a redesign of their logo.

It overhauled its 328-year-old logo of Britannia in an effort to become more ‘inclusive’, relieving her or her money in the process.

The seal, which shows the female personification of the British Isles, has been redesigned, with the Bank saying it wanted it to ‘reflect our current mission and values’.

The Bank has played up its ‘woke’ credentials in recent years, proudly declaring itself a Stonewall Diversity Champion, after joining a scheme run by the controversial charity.

The Bank has wrung in the changes to its iconography in recent years, including a redesign of their logo

The charity has recently been dropped by partners such as the BBC, House of Lords and Cabinet Office over concerns it could pressure employers to change their policies to reflect its agenda on trans rights.

The Bank, which has not revealed the cost, says it has also made changes to its website to make it easier for people to read.

While the entire logo has not been changed, there are a number of obvious differences between the new and the old.