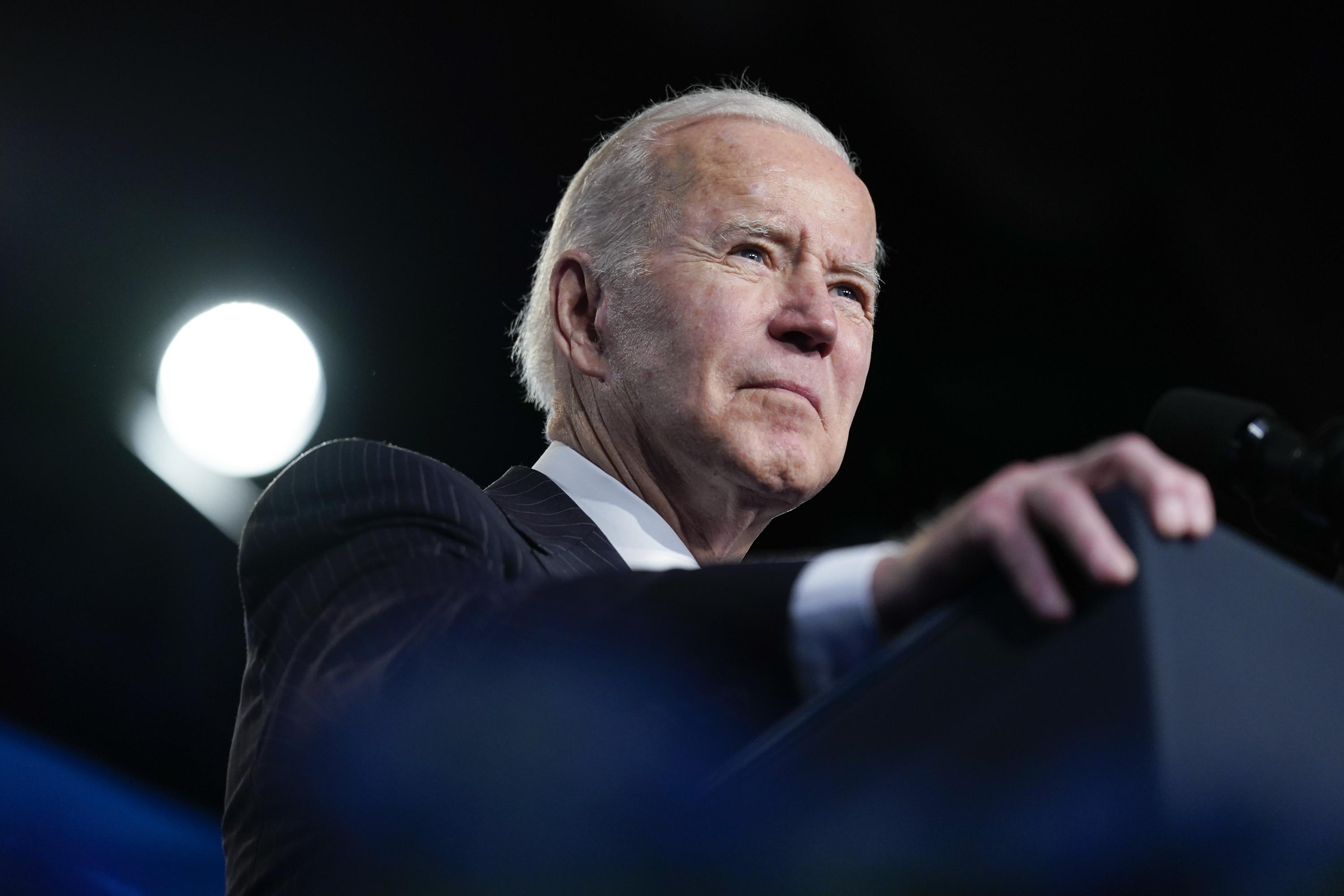 WASHINGTON (AP) – The US rolled out a new wave of financial sanctions on Wednesday against Russia that President Joe Biden said would place a lasting penalty on the country’s economy.

The United Kingdom quickly followed suit, and more pain was coming from the European Union as the allies pressed forward with an escalating campaign to tighten the economic screws on Russian President Vladimir Putin for “war crimes” in Ukraine.

Making it personal, the US sanctions singled out Putin’s family, targeting his two adult daughters in addition to blocking two key Russian banks.

Biden said that “Russia has already failed in its initial war” after the country’s forces were turned back from the Ukrainian capital of Kyiv. He cautioned, however, that “this fight is far from over.”

“This war could continue for a long time,” but the United States will continue to stand with Ukraine and Ukrainians in the fight for freedom, Biden said. “We’re going to stifle Russia’s ability to grow for years to come.”

The latest sanctions underscore the financial pain that Russia faces, as evidence that its troops killed Ukrainian civilians has led to ever harsher penalties by the US and its Western allies that are eroding Putin’s ability to fight.

While rounds of increased sanctions have not forced Putin out of the war, they have put Russia in increasingly desperate economic circumstances as Ukrainian forces withstand his barrages. Key to the effectiveness of the sanctions has been the unity between the US and European nations. And the atrocities revealed in Ukraine have intensified pressure on Germany and other countries to go further and join the US and Lithuania in blocking all Russian energy exports.

The UK piled on Wednesday with asset freezes against major banks, a ban on British investment in Russia and a pledge to end dependency on Russian coal and oil by yearend.

The European Union was also expected to soon take additional steps, including a ban on new investment in Russia and an embargo on coal, after the recent evidence of atrocities emerging in the wake of the retreat by Russian forces from the town of Bucha.

The US acted against two of Russia’s largest banks, Sberbank and Alfa Bank, prohibiting assets from going through the US financial system and barring Americans from doing business with those two institutions.

In addition to sanctions aimed at Putin’s adult daughters, Mariya Putina and Katerina Tikhonova, the US is targeting Prime Minister Mikhail Mishustin; the wife and children of Russian Foreign Minister Sergey Lavrov; and members of Russia’s Security Council, including Dmitry Medvedev, a former president and prime minister.

The penalties cut off all of Putin’s close family members from the US financial system and freeze any assets they hold in the United States.

Biden was expected to sign an executive order that would ban new investment in Russia by Americans no matter where they are living. The US Treasury Department was preparing more sanctions against Russian state-owned enterprises, according to the White House.

Britain announced asset freezes targeting Sberbank and the Credit Bank of Moscow and designated eight Russian oligarchs whom it says Putin “uses to prop up his war economy.”

“Together with our allies, we are showing the Russian elite that they cannot wash their hands of the atrocities committed on Putin’s orders,” British Foreign Secretary Liz Truss said.

Britain had already announced a plan to phase out Russian oil, which accounts for 8% of the UK supply. Russia is the top supplier of imported coal to the UK, though British demand for the polluting fuel has plummeted in the past decade.

Britain has not ended imports of Russian natural gas, which accounts for 4% of its supply, saying only that it will do so “as soon as possible.”

Videos and images of bodies in the streets of Bucha after it was recaptured from Russian forces have unleashed a wave of indignation among Western allies, who have drawn up new sanctions as a response.

The European Commission’s proposed ban on coal imports would be the first EU sanctions targeting Russia’s lucrative energy industry over its war in Ukraine.

EU foreign affairs chief Josep Borrell said energy was key to Putin’s war coffers. And because the war has pushed prices higher, Russia has benefited from being able to sell its natural gas and oil to the rest of the world.

“A billion euros is what we pay Putin every day for the energy he provides us since the beginning of the war. We have given him 35 billion euros. Compare that to the one billion that we have given to Ukraine in arms and weapons, ”Borrell said.

The steady intensifying in sanctions is less a sign of their shortcomings than the building pressure against Russia as it seeks foreign investment and basic goods, Brian Deese, director of the White House National Economic Council, told reporters at a Wednesday breakfast. “We need to have patience and perspective when it comes to the impacts on Russia of this unprecedented and crippling sanctions regime,” Deese said at the event sponsored by The Christian Science Monitor.

Deese noted that Russian inflation is running at 2% weekly, which would compound to annual inflation above 200% annually. He noted that the Biden administration expects Russian prices will not ultimately rise more than 200% this year.

While the White House has said Russia should not attend the G-20 meeting in Indonesia this November, he noted that it may drop out of the organization anyway because its economy has shrunk in size so dramatically.

After several European countries announced the expulsion of Russian diplomats, the European Commission proposed a fifth package of sanctions including a ban on coal imports that could be adopted once unanimously approved by the 27-nation bloc’s ambassadors.

European Commission President Ursula von der Leyen said the coal ban is worth 4 billion euros ($ 4.4 billion) per year and that the EU has already started working on additional sanctions, including on oil imports.

She did not mention natural gas, with consensus among the 27 EU countries on targeting the fuel used to generate electricity and heat homes difficult to secure amid opposition from gas-dependent members like Germany, the bloc’s largest economy.

But European Council President Charles Michel said the bloc should keep up the pressure on the Kremlin, suggesting that an embargo on gas imports should also be required at some point in the future.

“The new package includes a ban on coal imports,” Michel said on Wednesday. “I think that measures on oil, and even gas, will also be needed, sooner or later.”