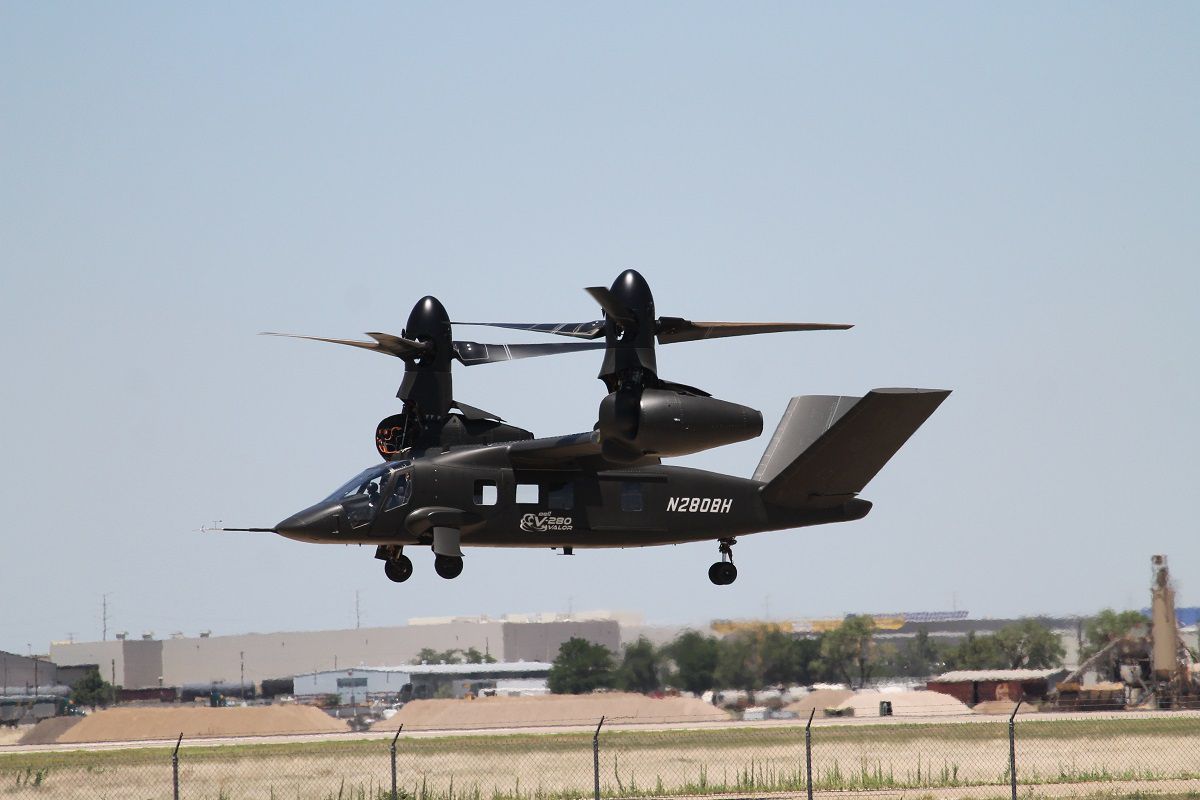 The deal for the next-generation helicopter is worth up to $1.3 billion and is set to replace roughly 2,000 Black Hawk utility helicopters and around 1,200 Apache attack helicopters around 2030. FLRAA will not serve as a one-for-one replacement for existing aircraft, but it will take over the roles of the Black Hawk, long the workhorse of the Army for getting troops to and around the battlefield, and the Apache, focused on attack missions.

Ideally, FLRAA will be capable of traveling roughly 2,440 nautical miles (or 2,810 miles) without refueling, but also must be agile enough to maneuver troops into dangerous hot spots.

Overall, the entire engineering and manufacturing development and low-rate production phase could be worth roughly $7 billion and if the “full complement” of aircraft are purchased across the entire life of the fleet, the program could be worth in the ballpark of $70 billion to include potential foreign military sales, according to the Army’s program executive officer for aviation, Maj. Gen. Rob Barrie, said during a Dec. 5 media roundtable.

Complicating the Army’s vertical lift modernization efforts, the Army is planning to develop and field a Future Attack Reconnaissance Aircraft nearly along the same timeline to perform the scout mission. That duty was left vacant when the Army decided to retire its Kiowa Warrior helicopters in 2013. Since then, the Army has filled that gap with teams of Apache helicopters and Shadow unmanned aircraft systems.

The contract represents a milestone for the service as the Army hasn’t procured two major helicopters since the 1980s and multiple efforts to buy other helicopters over the last several decades has ended in failure. For instance, the service canceled the Boeing-Sikorsky RAH-66 Comanche helicopter program in 2004 after spending roughly $7 billion on its development.

The FLRAA competition pitted two aircraft head to head: Bell’s V-280 Valor, a tiltrotor aircraft, and Sikorsky and Boeing’s Defiant X, which features coaxial rotor blades. Both aircraft were designed to fit into the same footprint as a Black Hawk.

“This is our largest and most complex competitive procurement we have executed in the Army in the … history of Army aviation,” Maj. Gen. Robert Barrie, Army aviation program executive officer, told Defense News earlier this year. “That system is going to be with us a long time; it goes without saying that we want to make sure everything is done correctly and in a disciplined manner.”

The decision, which was expected earlier this year, was initially one of the most anticipated Army awards in 2022. While service acquisition chief Doug Bush told Defense News in October the award would come in weeks, he also noted an announcement would be “conditions-based.”

Major procurement programs are often protested, putting pressure on the military to ensure awards are “protest-proof.”

Bush said the source-selection board for this effort needed to take a very careful and deliberate approach.

“There’s a process that the source-selection board goes through to not just make the source selection but then, importantly, to kind of audit themselves and have others audit them to make sure it was done the right way,” he said. “It does take a while, but we want to make absolutely sure that we do this the right way and that we get what’s best for the Army.”

Both FLRAA demonstrator aircraft spent several years logging test flights. They first flew in what the Army called a Joint Multi-Role, or JMR, technology demonstration, followed by two phases of a competitive development and risk-reduction effort.

While Valor’s first flight was right on schedule in December 2017, Sikorsky and Boeing ran into several issues leading up to their expected first flight, delaying it by more than a year.

First, in early August 2017, Sikorsky’s Raider aircraft, essentially a smaller version of Defiant the company built and flew, crashed at its test flight facility in West Palm Beach, Florida. That left Sikorsky with one Raider aircraft to continue in its internal test program for refining its X2 coaxial helicopter technology for both the FLRAA program and the Army’s Future Attack Reconnaissance Aircraft effort.

Then the company struggled to build Defiant’s rotor blades due to manufacturing issues, causing a delay.

The team had hoped to fly by the end of 2018, but while running the powertrain systems test bed, engineers discovered a series of issues that caused them to hit pause on testing. Defiant eventually flew for the first time in March 2019.

Once the JMR demonstration phase came to a close, the Army kept Valor and Defiant flying through another two phases of a competitive demonstration and risk-reduction effort, wrapping that up last year.

Before Bell retired its Valor flight demonstrator in June 2021, the V-280 flew more than 214 hours and showed off low-speed agility and long-range cruise capabilities, and reached a maximum 305-knot cruising speed.

FLRAA prototypes from Bell are due to the service by 2025. FLRAA is expected to enter the fleet in 2030, around the same time as the Army’s Future Attack Reconnaissance Aircraft is planned for fielding. Bell and Lockheed Martin are in a head-to-head competition to build the FARA.

The service plans to field FARA along with FLRAA around 2030. The two teams building prototypes are aiming to fly them by the end of 2023. Each team’s aircraft are almost entirely complete, and they are waiting for the Army’s new engine to be delivered under the Improved Turbine Engine Program. The ITEP engines went into the testing process ahead of delivering earlier this year after a delay due to the coronavirus pandemic.

The Army recently said it would postpone delivering the ITEP engines for the aircraft from the end of 2022 to the spring of 2023 due to additional supply chain and technical issues.


Watch: An Adorable Kitty is a Demon in ‘My Cat Lucy’ Animated Short