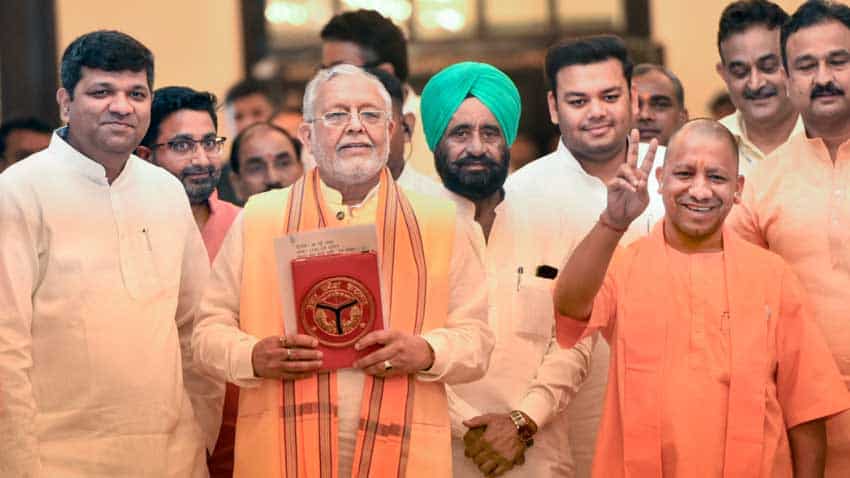 The Uttar Pradesh government led by Chief Minister Yogi Adityanath on Thursday presented a budget of Rs 6,15,518.97 crore for the financial year 2022-23. This is almost twice the size of Rs 3,46,935 crore budget presented by Akhilesh Yadav government for the financial year 2016-17. Here are important things to know from UP Budget 2022 and what CM Yogi Adityanath said:-

“The state government has also announced budget funds worth rupees to strengthen police and maintain law and order in the state.

– Putting forward the budget in the assembly, State Finance Minister Suresh Khanna said that the government has not only made a record payment of Rs 1,72,745 crore to sugarcane farmers till May 16, 2022, which is Rs 77,530 crore more than the five years of accumulated payment of Rs 95,215 crore under Akhilesh Yadav’s government, but has also proposed Rs 1000 crore for payment to the remaining sugarcane farmers.

-The Yogi government aims to distribute 2 crore smartphones and tablets in the next five years, including 12 lakh in the current financial year itself.

-The fiscal deficit is estimated at Rs 81,177.97 crore, which is 3.96 per cent of the estimated gross domestic product.

-The budget focuses not only on the education of young people and their employment, but also the empowerment of women and farmers, as well as all-round growth of the state and law and order.

“The Uttar Pradesh budget for 2022-23 meets the aspirations of the people of the state and is the vision of the government for the next five years,” Chief Minister Yogi Adityanath said on Thursday.

“The budget has taken care of the BJP’s Lok Sankalp Patra (election manifesto) released during the Assembly’s votes and out of 130 resolutions, 97 have been addressed,” he said.

“Along with the all-encompassing development of the state, the budget will also prepare the roadmap for a bright future,” Adityanath added.

-Adityanath described the budget as a line with the aspirations of 25 crore people in the state, and said it was prepared taking into account the overall development of the state. Every part of the community, including villages, the poor, farmers, youth, women and workers, will be benefited, he added.

“This budget is also a vision for the next five years, which will pave the way for a bright future along with an inclusive and holistic development of the state,” the prime minister told reporters after the budget presentation.

“Out of 130 resolutions in the BJP election manifesto, 97 have been taken care of in this first budget itself and a provision of Rs 54,883 crore has been made for this,” Adityanath said.

“Of these, 44 are new announcements or arrangements,” he added.

Adityanath said the election manifesto’s announcement to provide two LPG cylinders free of charge to receiving families of ‘Pradhan Mantri Ujjwala Yojana’ has been given space in the budget.

“A ‘Bhamashah Bhav Stability Fund’ has been set up in the budget to provide relief to farmers in the form of minimum support price for perishable crops such as potato, tomato and onion,” he said.

“As per the election manifesto, the process of providing free solar panels under ‘Pradhan Mantri Kusum Yojana’ is being continued to facilitate the farmers,” the chief minister said, adding that a provision has been made in this budget to provide more than 15,000 solar panels.

“For employment generation in the state, a provision has been made in the budget for a study to connect a person from each family to a government job, employment or self-employment,” Adityanath said.

“The funds needed for the construction of an international airport in Ayodhya have also been allocated in the budget,” he said.

“In 2025, the world’s largest spiritual and cultural event will be held again in the form of Kumbh and the government will start its preparations from now,” the chief minister said.

-Adityanath further said that a determination of Rs 100 crore has been made for 2025 ‘Mahakumbh’ in Prayagraj.

“Under ‘Babuji Kalyan Singh Gram Unnati Yojana’, a provision has been made to give Rs 22.50 crore to Uttar Pradesh New & Renewable Energy Development Agency for holistic development of villages and for installation of solar street lighting, he said.

– The prime minister also said that the fiscal deficit is estimated at 3.96 percent of the estimated gross domestic product.

(With input from IANS and PTI)