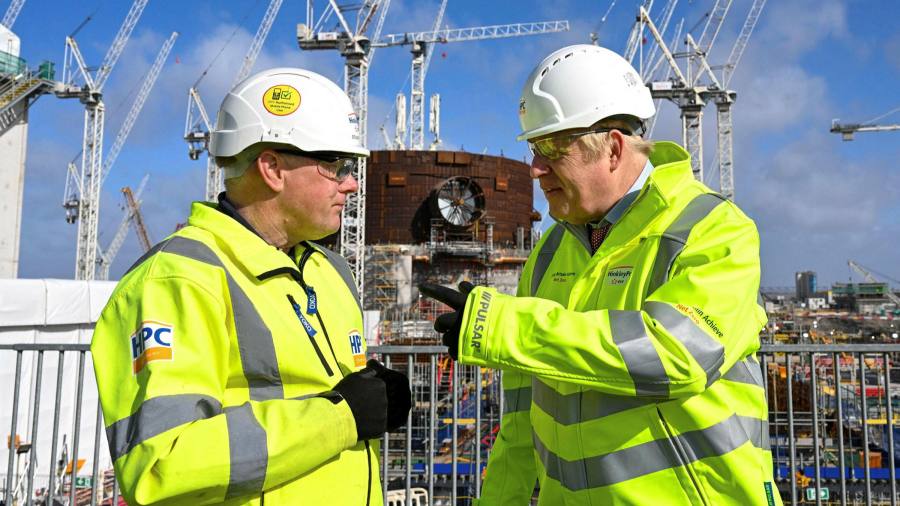 Industry groups and academics have branded Boris Johnson’s long-awaited energy security strategy a “missed opportunity” that would not reduce the UK’s reliance on expensive imports in the short term and fail to alleviate the financial pressure on households from soaring fuel bills.

The prime minister put offshore wind and nuclear power at the center of the policy that aims to produce 95 per cent of electricity from low-carbon sources by 2030 and reduce the country’s vulnerability to highly volatile global commodity markets.

Johnson said that by making nuclear power one of the cornerstones of the strategy it would allow Britain, which gave the world the first commercial atomic plant, to regain its “pre-eminence” in technology.

The strategy was drawn up in response to the invasion of Ukraine by Russia, one of the world’s largest fossil fuel exporters. The decision by Vladimir Putin, Russia’s president, to go to war added further volatility to already high global commodity prices and prompted countries across Europe to revisit their energy strategies.

But the prime minister’s decision to back nuclear and offshore wind, which both have long lead times, over cheaper technologies, such as land-based turbines that are quicker to install, was widely criticized.

Energy groups and specialists were also dismayed at a lack of fresh funding to improve the energy efficiency of the UK’s housing stock, which ranks among the worst in Europe. Measures such as improved insulation were among the quickest ways of tackling the current energy crisis, they said.

Simon Virley, head of energy and natural resources at advisory firm KPMG, called the plan a “missed opportunity”. He added: “The best way to reduce energy bills permanently, cut emissions and reduce our dependence on imported gas is a step change in energy efficiency.”

He said that other European countries, like Holland, France and Germany, were “doing this as a matter of urgency as part of their response to the Russia-Ukraine crisis. Yet the UK strategy is almost silent on measures to improve energy efficiency ”.

Danny Newport, head of net zero at the non-profit Tony Blair Institute, said the strategy felt “perilously insecure”. He said by “spurning onshore wind”, the government had prioritized “nimbyism” although he acknowledged there were never going to be any quick fixes to the challenge of increasing domestic energy supplies.

Michael Lewis, UK’s chief executive of Eon, Britain’s second-biggest energy company, said there was “little” in the strategy that would “deliver a solution this decade, let alone this year”.

Environment groups also criticized the government’s plan to hold the first UK North Sea licensing round since 2020 later this year. But Johnson defended plans to source more fossils fuels domestically, pointing out it fitted in with the UK’s net zero target. “In meeting net zero by 2050 we may still use a quarter of the gas that we use now,” he said.

The strategy sets out to reverse the decline in the UK’s nuclear generation capacity by setting a goal of building 24 gigawatts of new atomic power by 2050 – the equivalent of eight large atomic energy plants.

Britain has a poor recent record on delivering such projects, which can take over a decade to build. So far one new nuclear plant – the 3.2GW Hinkley Point C in Somerset – is under construction, even though the Labor government in 2006 set out plans for a new generation of reactors.

Offshore wind capacity is set to increase fivefold to 50GW by 2030, up from a previous 40GW goal by the end of the decade. This target was accompanied by a commitment to cut the time that offshore wind projects can take to start generating from 13 years “down by over half” by fast-tracking processes such as planning consent.

Business secretary Kwasi Kwarteng had wanted to include a target to double onshore wind capacity to 30GW by 2030 but government officials admitted that had not survived “political testing” to make it to the final strategy document.

The prime minister had come under heavy pressure from Conservative backbench MPs who oppose onshore wind, even though some of the government’s own polling shows the majority of the general public supports the technology.

The strategy stopped short of setting a firm target for solar power, another source that can be built quickly and relatively cheaply, but said it would look to increase the UK’s 14GW of capacity “up to five times by 2035”.

In the foreword to the document, the prime minister admitted that the benefits to consumers of the policies would not be felt for a long time, a point reinforced by Kwarteng who said the strategy would not yield results for at least three to five years and represented “More of a medium [-term solution]”.

Ed Miliband, Labor’s energy spokesperson, called the strategy “hopeless” and said the government was in “disarray” over the current cost of living crisis.

But the Climate Change Committee, an advisory group to the government, praised the strategy’s targets for offshore wind, nuclear and hydrogen – the latter of which was doubled to 10GW by 2030.

Mike Thompson, director of analysis at the CCC, said it was nevertheless disappointing “not to see more on energy efficiency and on supporting households to make changes that can cut their energy bills now”.

As part of its commitments on nuclear, the strategy confirmed the creation of a new task force, the “Great British Nuclear Vehicle”, to oversee projects and help build a “resilient” pipeline.