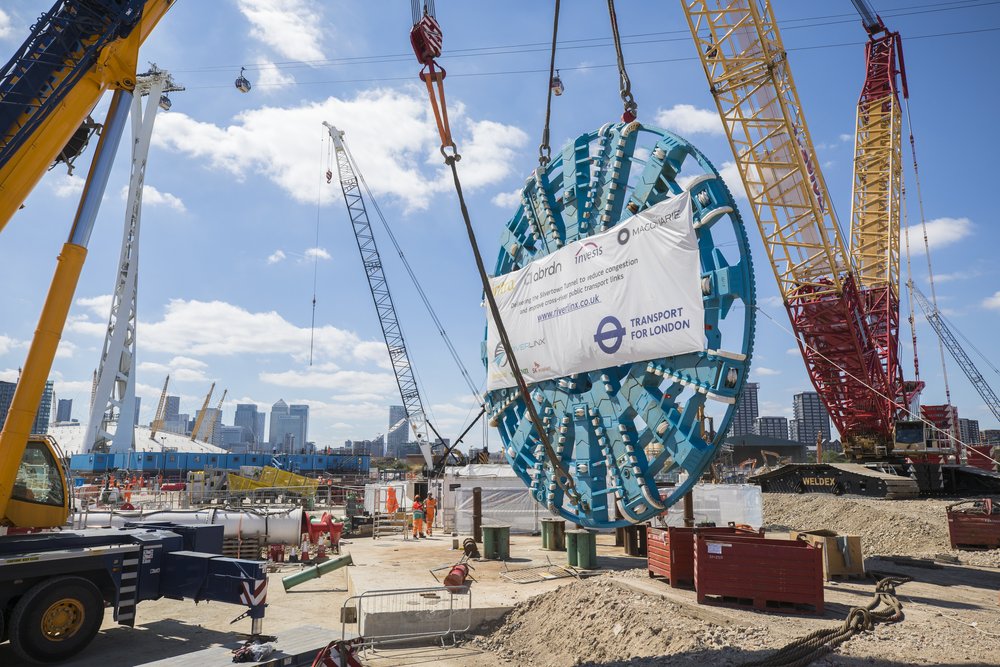 The largest tunnel boring machine cutting head has been lowered into the space prepared for it to start digging the Silvertown road tunnel in East London. The Tunnel Boring Machine (TBM) is 11.91 meters wide, the equivalent of almost three double-decker buses, and is the largest diameter TBM in the UK.

The 1,800 tonne TBM began being lowered into the launch chamber in pieces last month, where it will be assembled within the chamber before commissioning and starting to drill the 1.4km tunnel later this summer.

As well as the cutter head, parts of the TBM shield have also recently been lowered down into the launch chamber, as well as the 250-tonne main drive of the TBM. Elsewhere on the site the conveyor which will carry tunnelling spoil from the chamber to barges to then be transported along the river is approaching completion, and the first of the concrete tunnel rings to be installed as the TBM progresses across the river have also begun arriving.

The controversial road tunnel is being dug next to the existing Blackwall tunnels to relieve congestion, and as its larger, double-decker buses, which are just a bit too tall for the older tunnels, will be able to cross the Thames at this point. The tunnel will have a dedicated bus lane in each direction and is currently projected to operate at least twenty zero-emission buses per hour from opening. That may change closer to the date if there are future reductions in bus routes due to TfL’s current financial situation though.

Last month, Riverlinx, the venture building the tunnel announced that “Jill” has been chosen as the name for their TBM in recognition of Jill Viner the first female bus driver to drive a London bus in June 1974.

This website has been running now for over a decade, and while advertising revenue contributes to funding the website, it does not cover the costs. That is why I have set up a facility with DonorBox where you can contribute to the costs of the website and time invested in writing and research for the news articles.

It’s very similar to the way The Guardian and many smaller websites are now seeking to generate an income in the face of rising costs and declining advertising.

Whether it’s a one-off donation or a regular giver, every additional support goes a long way to covering the running costs of this website, and keeping you regularly topped up with doses of Londony news and facts.