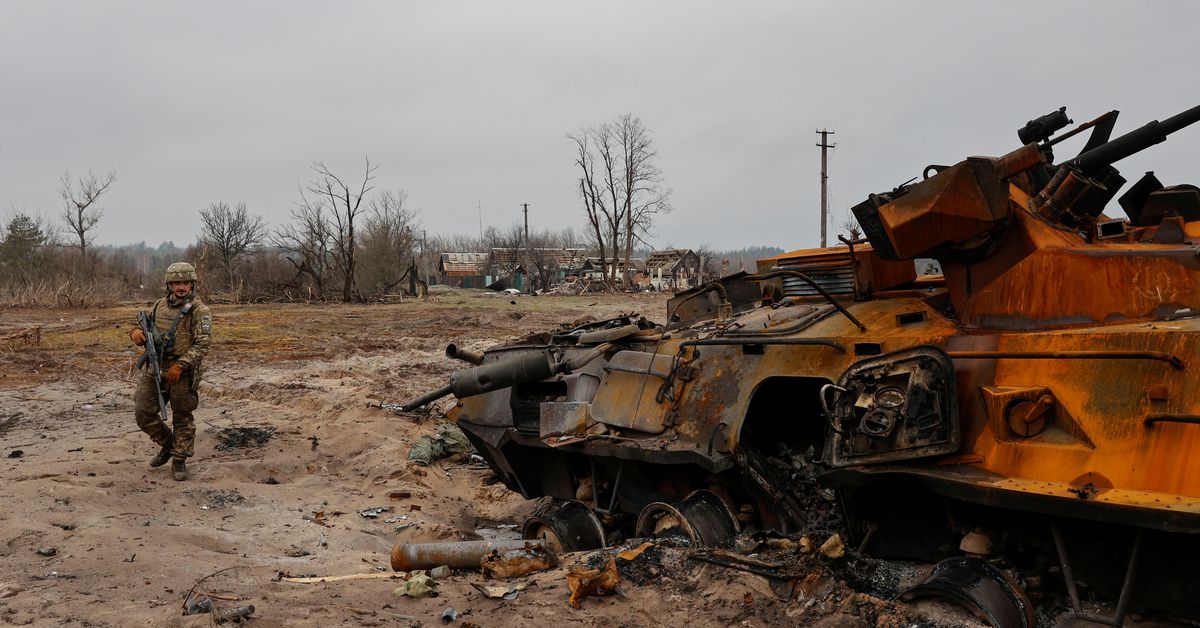 TROSTYANETS / LVIV, Ukraine, April 1 (Reuters) – European buyers of Russian gas faced a deadline to start paying in rubles on Friday, while negotiations aimed at ending the five-week war were set to resume even as Ukraine braced for further attacks in the south and east.

Moscow’s invasion of its neighbor has killed thousands, sent millions fleeing and galvanized the United States and allies around the world to impose punishing penalties on Russian government entities, businesses and oligarchs.

“The actions of the EU will not remain unanswered … the irresponsible sanctions by Brussels are already negatively affecting the daily lives of ordinary Europeans,” Nikolai Kobrinets told the news agency.

The energy showdown has huge ramifications for Europe as US officials circle the globe to keep pressure on Putin to stop an invasion that has uprooted a quarter of Ukraine’s 44 million people. (Full Story)

The International Energy Agency will hold an emergency meeting on Friday to discuss a new release of strategic oil reserves alongside a US plan to pump massive supplies starting in May to cool oil prices that had soared more than 30% this year largely as a result of the Ukraine was.

The war also threatens to disrupt global food supplies, with a US government official sharing images of what they said was damage to grain storage facilities in Ukraine, a major grain exporter.

At talks this week, Moscow said it would reduce offensives near the capital Kyiv and in the north as a goodwill gesture and focus on “liberating” the southeastern Donbas region.

Kyiv and its allies say Russia is instead trying to regroup after taking losses from a Ukrainian counter-offensive that has recaptured suburbs of the capital plus strategic areas in the northeast and southwest.

Ukraine’s general staff said Russian troops had started a partial withdrawal from the Kyiv region towards Belarus and were taking looted vehicles with them.

Video footage from Irpin, on the western fringe of Kyiv, showed destroyed Russian tanks amid bombed out buildings and Ukrainian authorities removing victims in body bags.

“We knew they (Russians) were being pushed out but when our army came then I fully understood we have been liberated. It was happiness beyond imagination,” said Irpin resident Lilia Ristich.

In a fresh development, a fuel depot in the Russian city of Belgorod near the Ukraine border was on fire and the regional governor said it had been attacked by two Ukrainian military helicopters. If confirmed, it would be the first Ukrainian airstrike on Russian soil.

Ukrainian President Volodymyr Zelenskiy warned of “battles ahead” in Donbas and the besieged southern port city of Mariupol.

“We still need to go down a very difficult path to get everything we want,” Zelenskiy said.

Peace negotiations are set to resume by video conference on Friday. Seeking to bolster its position, Moscow is redeploying forces from Russian-backed breakaway regions in Georgia to Ukraine, Britain’s defense ministry wrote on Twitter.

The reinforcements indicated Russia had sustained unexpected losses, it said.

US and European officials say Putin has been misled by generals about his military’s dire performance.

Ukrainian authorities were hoping to evacuate more residents from Mariupol after Russia agreed to open a humanitarian corridor on Friday, but several previous deals have collapsed amid mutual recriminations.

Ukrainian Deputy Prime Minister Iryna Vereshchuk said 45 buses sent to evacuate people from Mariupol had been stopped on Thursday by Russian forces outside Berdyansk, about 75 km to the west.

“Tomorrow we will continue trying to push through a humanitarian corridor to Mariupol so as not to leave our people on their own,” she said in an online post.

In a Facebook post, the general staff said Ukrainian forces were still holding Mariupol, a gateway to the Black Sea which links a strategic corridor between Donbas and the Russian-annexed Crimea peninsula.

Tens of thousands have been trapped for weeks with scant food, water and other supplies in the city that was once home to 400,000 people but has been pulverized by bombardment.

“We spent 30 days in the basement with small children. The children are shaking, even still,” said a woman named Larisa.