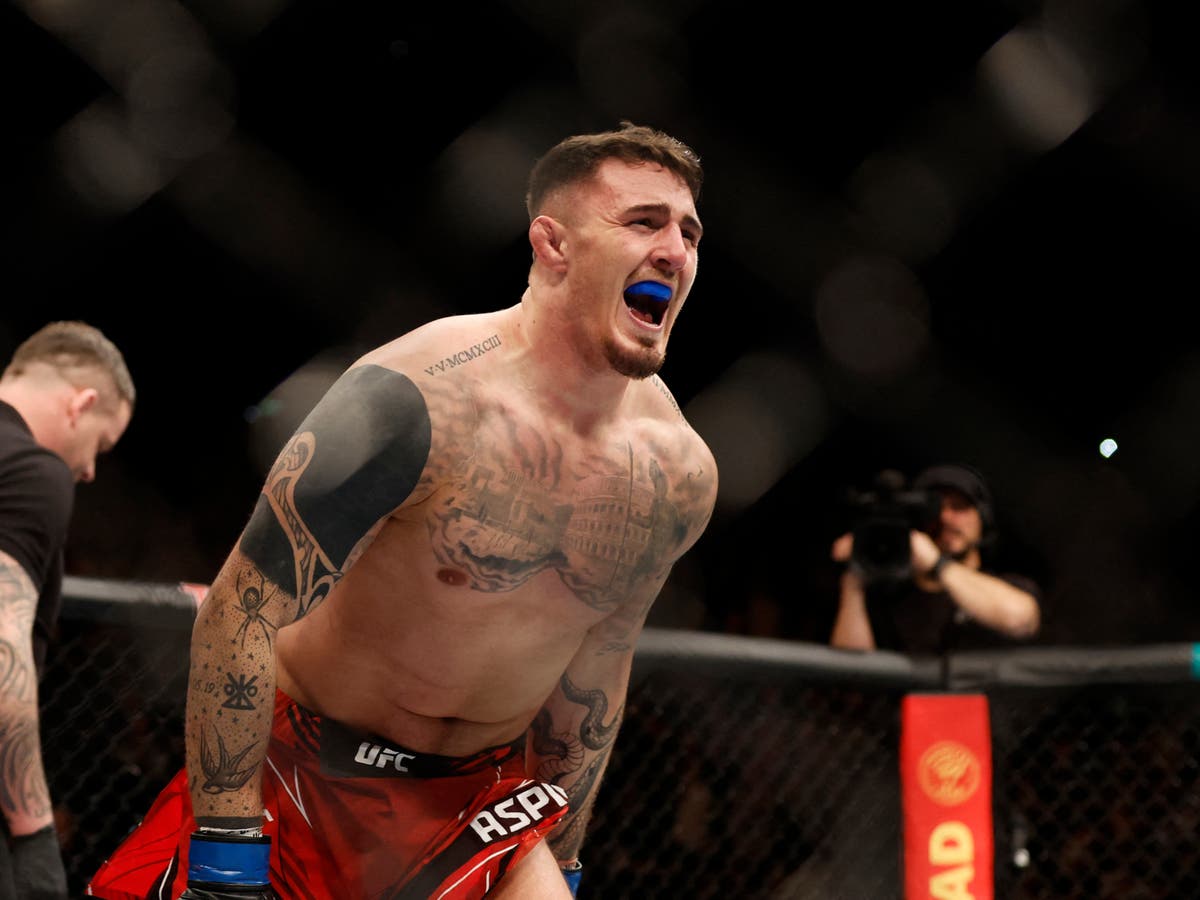 It should not have been that easy. The main event of UFC London in March saw Tom Aspinall headline a UFC card for the first time, while also fighting in front of an arena full of fans for the first time since signing for the promotion. Across the Octagon stood Alexander Volkov, an MMA veteran with twice as many knockouts as Aspinall had fights. In a little over three-and-a-half minutes, Aspinall had dispatched the Russian, submitting the former Bellator heavyweight champion with a straight arm lock after outstriking Volkov and taking him down in clinical fashion. It should not have been that easy.

In three minutes and 45 seconds, Aspinall had exhibited the crispness of striking, speed of reflex and precision of timing that have set him apart at heavyweight and earned him four stoppage wins from four performances in the UFC. To take those totals to five apiece was one matter, but to do so in the pressure cooker of the O2 Arena and against his toughest opponent yet was another. Four months later, Aspinall must do it again. On Saturday 23 July, the Wigan heavyweight will face Curtis Blaydes in an even sterner test as he tops the bill at UFC London once more.

“I think [the March event] was a special circumstance definitely, but I’m expecting the same again – if not more, ”says the 29-year-old Aspinall (12-2), recalling how the first UFC London card in three years became a momentous night in the history of UK MMA and captivated fans worldwide. “We’ve set the bar high now, so we’ve got to keep going with that. Experience, you can not buy it, but I’ve done it now, so I know exactly what to expect from the crowd and what the feeling’s like.

“I’m not saying it’s going to be any easier this time, because I’m sure I’ll still be really nervous. I’m nervous for every fight, there’s a lot at stake for every fight. That’s something that we have to be prepared to deal with as high-level athletes. This is the life I chose, I chose to put myself in these positions. If I did not want to do that, I’d be working in an office or a car garage, or doing something that does not require any pressure. I have to embrace it and I enjoy it, so when I stop feeling like that, I’ll probably stop fighting and do something else that brings me those same kinds of feelings. ”

Blaydes (16-3, 1 No Contest) has twice appeared to be on the cusp of heavyweight title shots in the UFC. On both occasions, the American has seen winning streaks halted by knockouts losses – first against reigning champion Francis Ngannou in 2018, then by former title challenger Derrick Lewis last year. Now the 31-year-old is putting together another win streak, entering the English capital on the back of victories over Jairzinho Rozenstruik and Chris Daukaus. A wrestling specialist, Blaydes has honed his striking skills over time, meaning his clash with Aspinall represents a meeting between two of the most dynamic heavyweights in the UFC.

“Definitely on paper it’s the toughest test of my career – 100 per cent, by far,” says Aspinall. “It would be stupid to look past someone as good as Curtis. In my opinion, he is the toughest challenge in the division, so for me to look past that is basically suicide. He’s the guy who avoiding everyone, but if everyone’s avoiding him, that makes me want to fight him more. ”

It may be more a case of confidence than courage for Aspinall, though, which makes sense for a man who has earned all 12 of his professional wins via stoppage and has not lost since 2016.

“I’m one of the most dangerous fighters in the UFC, I’ve got the best finishing record in the UFC, and I’ve got finishes from all different positions,” says the Briton. “I can win literally anywhere, which is pretty rare – especially for heavyweights. That’s how I see myself winning [against Blaydes], getting a finish. It’s heavyweight MMA, their gloves are so small and the heavyweights are so big; we can all beat each other. Ngannou’s the champion right now, and I know he’s a devastating puncher, but if someone lands clean on his chin, he’s gonna go over just like anyone else. ”

Although Aspinall mentions Ngannou and is confident of fulfilling predictions from fans and fighters that he will be a UFC champion one day, the Briton is wary of getting dragged into any talk of a specific route to a title shot.

“As egotistical as this may sound, I knew this stuff was gonna happen. I’d seen this in my mind far before anyone else had seen it, so it feels quite normal to me, ”Aspinall says. “I believe one day I’m gonna be UFC champion – at some point in the next 10 years, before I retire. I’m not bothered about who fights who, how it plays out; all that stuff is irrelevant to me. I have a strong belief that I’m gonna be UFC champion one day, and it will work itself out. ”

Whether Aspinall achieves that goal or not, his role at UFC London in March was vital in the advancement of UK MMA. If he can replicate that kind of performance against Blaydes, or even just secure a victory over his most challenging opponent so far, Aspinall can take pride in further highlighting the sport in his home country and enabling all that comes with that.

“I’m not just selfish,” he stresses. “It’s a selfish sport, but I also want what’s best for UK MMA. I want these kids who are getting into MMA now to be paid properly. I do not want these people to have what I had when I was coming up and be absolutely scraping the barrel financially. I want MMA to be as big as it possibly can be in this country, and it’s a team effort from everybody. ”