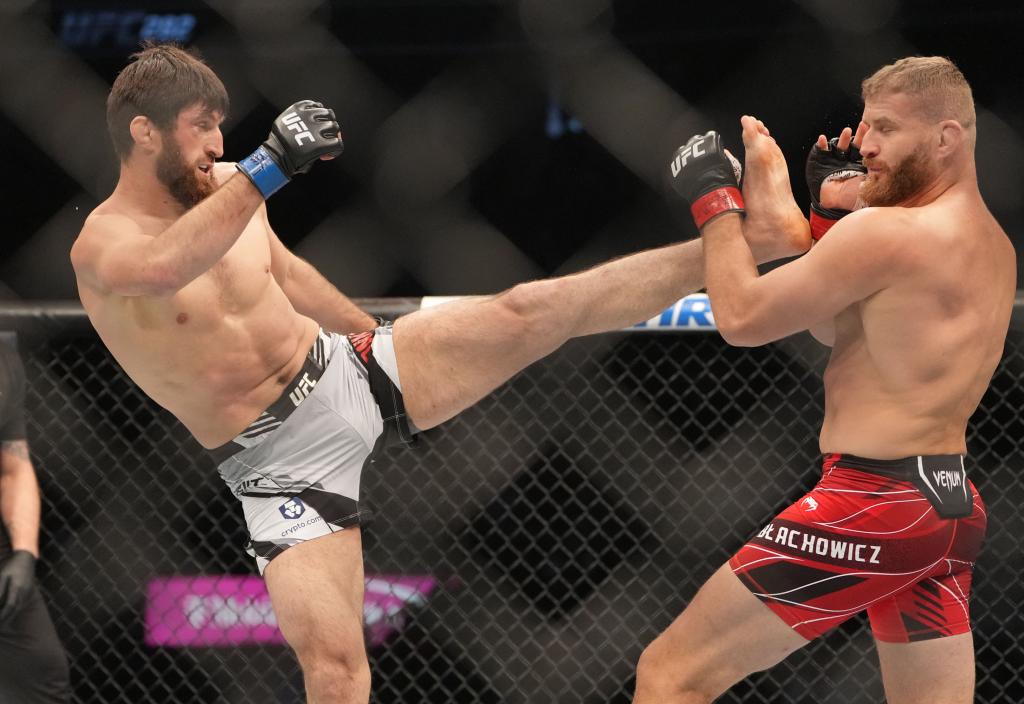 LAS VEGAS — The light heavyweight title remained vacant Saturday night after judges awarded the main event in UFC 282 a draw so controversial that both fighters, Jan Blachowicz and Magomed Ankalaev, agreed Ankalaev should have won the belt.

During the post-fight interview in the octagon, No. 3 Blachowicz (29-9-1) walked over to fourth-ranked Ankalaev (18-1-1) and told him he deserved the belt.

Ankalaev was so upset over the decision he said through a Russian interpreter he didn’t know if he would “fight in this organization again.”

“I won that fight,” Ankalaev said. “I won the belt. Where is my belt?”

Blachowicz seemed embarrassed by the decision.

“Maybe we can have a rematch,” Blachowicz said somewhat sheepishly. “I don’t choose the judges.”

The co-main event also went to the scorecards, and there was far from widespread agreement among the fans about the results of that fight as well.

Even if Blachowicz-Ankalaev was the main event, much of the crowd came to see England’s Paddy Pimblett in the co-main fight. American Jared Gordon, 34, had other ideas, dictating the tempo in the lightweight match even as the crowd repeatedly yelled, “Let’s go, Paddy!”

But even much of the crowd had trouble believing the decision, with many booing Pimblett (20-3) winning 29-28 on all three judges’ cards. Gordon shook is head and laughed when the scores were announced.

“It wasn’t that close,” Pimblett insisted. “I coasted in the third round because I knew I already won the first two.”

The brash 27-year-old has becoming a polarizing figure in the UFC, but has backed up his words with his performances in the cage to date, even getting a major benefit of the doubt from the judges over Gordon (19-6). This was the first time Pimblett has fought into the third round since entering the UFC in September 2021.

As for the main event, Blachowicz and Ankalaev weren’t expected to be the headliners, but light heavyweight champion Jiri Prochazka dropped out because of a shoulder injury. Second-ranked Glover Teixeira declined to fight Blachowicz, vacating the title and elevating this fight to a championship bout.

The fight was even through the first two rounds, but Blachowicz began to get the upper hand in the third with his kicks that weakened Ankalaev. Then Ankalaev took the Polish fighter to the floor with about five seconds left and came out swinging in the fourth.

Ankalaev took Blachowicz back to the floor with a little more than three minutes left and kept him there the remainder of the fourth, but wasn’t able to get a submission.

Again in the fifth, Ankalaev came out the aggressor by throwing punches and quickly getting Blachowicz to the floor, where it became a wrestling match the rest of the way.

“I did everything to get this victory,” Ankalaev said.

Fighting for the championship was nothing new for Blachowicz, who claimed the belt in September 2020 with a technical knocking of Dominick Reyes. However, Blachowicz lost the title when Teixeira beat him by submission in the second round in October 2021.

This was Ankalaev’s first title shot, and he was nearly undefeated entering this match. He was ahead on the scorecards in a 2018 bout against Paul Craig, but was submitted with a second left.

Raul Rosas Jr., 18, became the youngest UFC fighter to win a match when he caused fellow American Jay Perrin, 29, to submit by rear naked choke at 2:44 of the first round of the bantamweight bout. Rosas asked in the post-fight interview if UFC president Dana White could provide him a $50,000 bonus so he could buy his mom a minivan to shuttle him to the UFC Performance Institute.