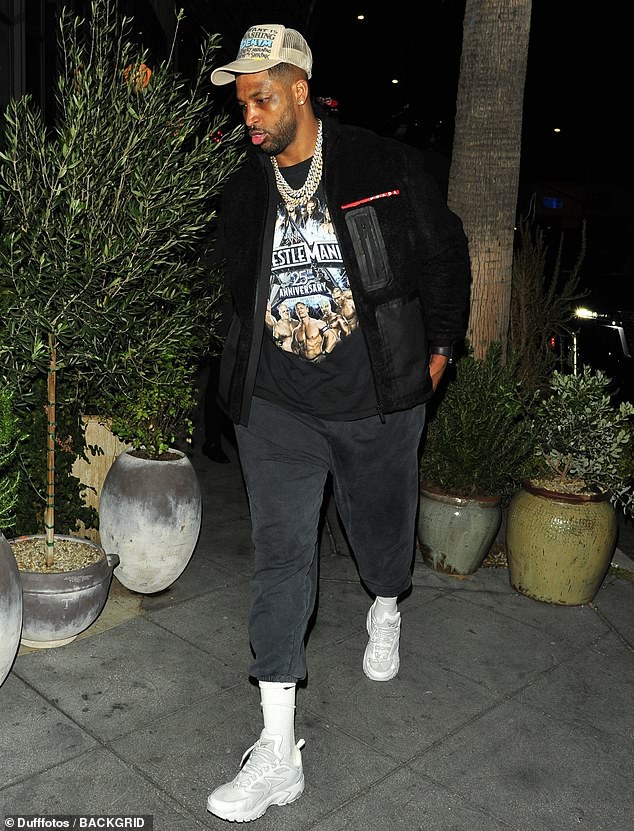 By Alesia Stanford For Dailymail.Com

Tristan Thompson was spotted out by himself for dinner Saturday night.

The Chicago Bulls star looked low key in a black fleece jacket and joggers as he arrived at the Lavo restaurant in West Hollywood.

He also had his sleeve carefully pulled up to reveal his luxury wristwatch as he entered the restaurant.

The basketball player is suffering from some bad public relations after a scathing episode of The Kardashians, in which his ex-partner Khloé Kardashian, 37, was about to learn he had cheated on her and fathered a child in a cliff-hanger ending.

The season one finale of the reality show will stream on Hulu next week.

The reality star – who shares daughter True Thompson, four, with the athlete – took to social media after the episode aired, writing on Twitter, ‘Rewatching this part is uncomfortable but I love and appreciate my family more than I can express.’

Publicity: The Chicago Bulls player has received a lot of bad publicity since details of his cheating and paternity scandal was made a part of the most recent The Kardashians episode

Worst person: The NBA star was referred to as ‘the worst person on the planet’ during the penultimate episode of the reality show. The season one finale will stream later this week on Hulu

The Good American Founder’s fans immediately began offering solace to Khloe, who seemed grateful for the barbs pointed toward Tristan.

One wrote, ‘Can’t believe I forgave him like that for him to break my girl’s heart.’ ‘Join the club,’ wrote Khloé.

However, the model’s fans were disconcerted after the single mother shared a post of her daughter watching the controversial episode, and wondered if the preschooler had seen the entire episode in which her dad is referred to as ‘the worst person on the planet.’

Bad memories: Khloé Kardashian, 37, admitted in a tweet on Thursday that she was ‘uncomfortable’ watching herself learn about Tristan Thompson’s latest cheating scandal on The Kardashians

It now appears the NBA first round pick is the father to three.

In addition to True, he shares his oldest, Prince, five, with model Jordan Craig.

His youngest was born to the personal trainer and real estate agent Maralee Nichols in December 2021.

Awkward: In addition to sharing True, four, with Khloé, Tristan is the father of Prince, five, with model Jordan Craig and his youngest child, who was born in December to Maralee Nichols