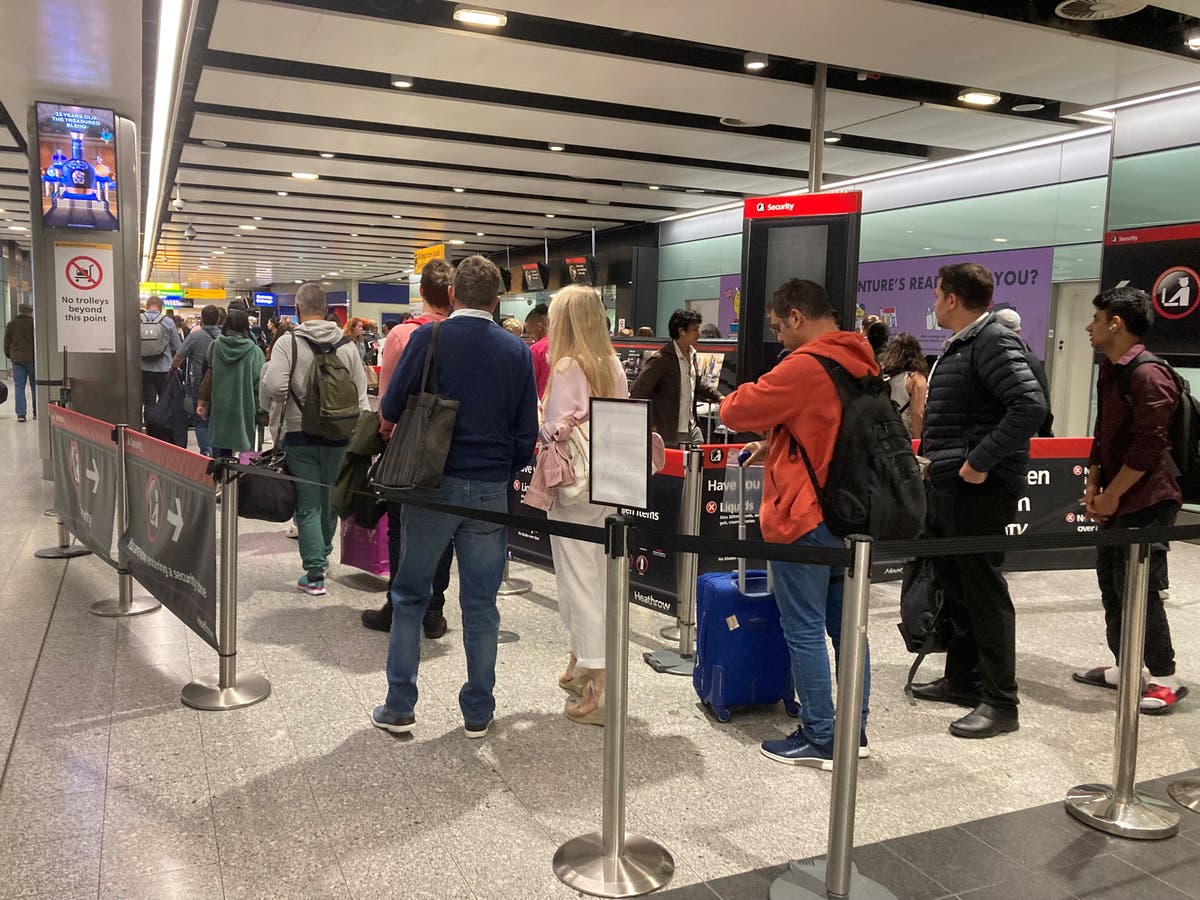 Tens of thousands of Britons are stranded across airports all over Europe after yet another series of flight cancellations as the half-term travel chaos shows no signs of abating.

Many families and couples were due to return to the UK on Saturday but 100 flights were canceled due to the ongoing issues with staff shortages that have plagued airports for months.

Dozens of flights have already been canceled on Sunday, with the biggest issue at Gatwick where Wizz Air, British Airways and easyJet have grounded flights.

He has called on the government to relax immigration rules and allow European workers who were employed in the aviation industry before Brexit and the Covid-19 pandemic to return in order to plug the labor shortage in the sector.

However, Transport Minister Grant Shapps outright dismissed calls to open the door to more “cheap” foreign workers in a bid to relieve the pressure on the aviation sector.

He accused travel bosses of “cutting too far” during the pandemic and said it was up to the sector to solve the issues.

Pictured: queues at Eurostar in Paris

The first image shows theGare du Nord terminal and the second is the Eurostar waiting room.

Is travel and passport chaos the new normal for Global Britain?

This travel chaos and these passport delays do not feel very much like the Brexit we were promised, writes Sean O’Grady.

Grant Shapps has rejected calls to open the door to more “cheap” foreign workers in a bid to relieve the pressure on the aviation sector.

The transport secretary said he will “do absolutely everything possible to make sure” holidaymakers are able to get away without issues during the summer but stopped short of allowing a temporary migration influx to bridge the labor shortage.

Mr Shapps, asked whether he would temporarily allow more foreign workers into the industry to alleviate staffing pressures, told the BBC’s Sunday Morning program: “The answer can not always be to reach for the lever marked ‘More immigration’.

“There is not some pull that is going to relieve this.”

Mr Shapps also denied that the UK’s divorce from Brussels was the main factor behind the chaos and queues seen at Britain’s airports over the four-day Platinum Jubilee break, pointing to large-scale disruption elsewhere in Europe.

Mr Shapps added that the Brexit vote had been about moving away from hiring “cheap labor from somewhere else”.

“I did not vote for Brexit but the country did and we’ve made our choice – we want a high-wage, high-skilled economy,” he said. That means the aviation sector, like all other sectors, and as the HGV, the lorry driving sector has now done, needs to change. ”

Passengers scheduled for the 9.12am CEST train from Paris Gare du Nord have been told that their train should be ready to depart at 3.15pm CEST, six hours after it was initially scheduled to leave.

As this news was announced by members of the Eurostar team, there were cheers and clapping throughout the Eurostar waiting terminal, where passengers from four delayed trains have been waiting for close to five hours.

An earlier electrical fault just outside of Paris has been the cause for the Eurostar delays today, which has seen several trains from Paris to London canceled as British holidaymakers try to return home for the end of the school holidays.

Passengers in the three other trains leading up to 12pm have been told they should be able to get home today too.

At least 18 flights, believed to be carrying around 3,000 passengers in total, have been diverted after a Sunday morning power failure at Luton airport.

One Wizz Air jet landed at Beauvais northern France, while others were re-routed to Doncaster, Liverpool and East Midlands airports.

Luton airport initially told passengers: “An earlier power failure in the area has resulted in the temporary loss of some navigational aids, meaning some disruption to flights.”

Aircraft could not land for around three hours between 7am and 10am. Most of the arrivals were on Wizz from eastern European airports, but an easyJet arrival from Belfast was re-routed to Gatwick.

Simon Calder has the latest.

Laura Hampson reports that trains running from Paris to London on the Eurostar have been delayed since 9am CEST this morning due to an electrical fault just outside of the French capital.

There are currently four trainloads of passengers, waiting to board a service back to London with queues stretching out past the Gare du Nord gates and later trains have been canceled.

An update given by the Eurostar team at 12.30pm CEST told passengers that the electrical fault is more serious than first thought, and no trains would be leaving until mid afternoon, likely from 4pm CEST onwards.

However, this is just an estimate.Passengers have been told that they can cancel their tickets if they wish, but there’s a large number of British passengers in the waiting room hoping to get home today.

Last night’s thunderstorm has meant that temperatures are hot and humid today, but the Eurostar staff say that air conditioning will not be turned on in the Gate du Nord terminal until 21 June.

Holidaymakers have reported lengthy queues at Bristol Airport on Sunday morning. A number of passengers have taken to social media upset by the delays.

Transport Minister Grant Shapps has said he does not anticipate calling in the army to help with issues at airports.

Ryanair boss Michael O’Leary suggested on Thursday that the armed forces could be drafted into transport hubs for the next three to four months to prevent travel problems. The Liberal Democrats also suggested this could help ease problems faced by passengers.

Asked on BBC’s Sunday Morning program if the army will be brought in if things do not improve over the next few weeks, Mr Shapps said: “The Army is not a snap solution to every problem. Secondly they are being deployed in increasing numbers to eastern Europe, to the Baltics, in what is a war situation and that’s what the Army are principally there for.

“The airports and airlines will need to sort out this problem. The Government will give them every support, but I do not anticipate that will include calling in the Army. ”

Brexit is to blame for the chaos in Britain’s airports which has seen hundreds of flights canceled and thousands of people’s half-term travel plans disrupted, London mayor Sadiq Khan has said.

Mr Khan called on the government to relax immigration rules to allow airport and airline workers who returned to their EU countries of origin following Brexit to come back to the UK to resolve staffing shortages.

But transport secretary Grant Shapps denied that the problems were caused by the UK’s withdrawal from the EU and rejected calls for aviation workers to be added to the list of shortage occupations with lighter controls on migrants.