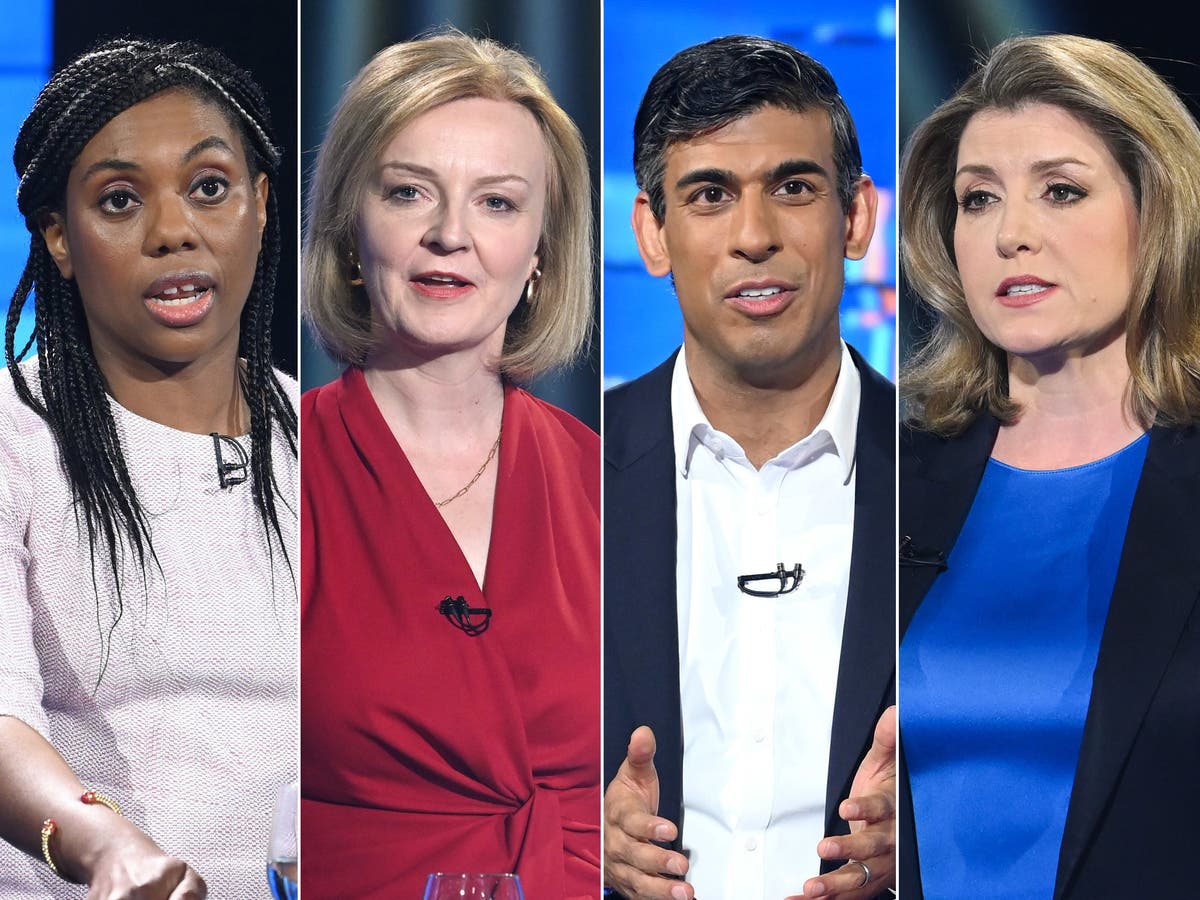 Contenders for the Conservative leadership are engaged in frenzied horse-trading for a handful of MPs’ votes which will decide who will go into the final battle to succeed Boris Johnson and become prime minister.

The field of hopefuls was reduced to four on Monday as outsider Tom Tugendhat, darling of the centrist One Nation group, was eliminated with just 31 votes.

Former Chancellor Rishi Sunak came close to securing a place on the shortlist of two which will go to Tory members this summer, gaining 14 votes to hit 115 – five short of the 120 needed.

But foreign secretary Liz Truss’s campaign hung in the balance, after she failed to overhaul Penny Mordaunt in the race for second place amid claims from rival camps that she was under-performing.

The Truss team had been hopeful of securing a majority of the 27 MPs who backed fellow right-winger Suella Braverman before her elimination on Friday. But despite Ms Braverman’s endorsement, the foreign secretary put on just seven votes to reach 71, 11 short of Mordaunt’s tally of 82.

With a sizeable chunk of Mr Tugendhat’s backers expected to switch to the international trade minister in the next round of voting on Tuesday, Ms Truss’ hopes will depend on wooing supporters of “anti-woke” insurgent Kemi Badenoch.

Ms Badenoch gained nine votes to reach a creditable 58, but is highly vulnerable to being knocked out in the fourth round of voting, giving her supporters a decisive say on who joins Mr Sunak on the ballot paper.

With some polls suggesting that the approximately 200,000 Tory members would favor either Ms Mordaunt or Ms Truss over Mr Sunak, prominent backbencher Steve Baker said that Boris Johnson’s successor could effectively be chosen by Ms Badenoch’s backers.

“It seems that in the last round, Kemi Badenoch’s supporters will decide whether Liz Truss or Penny Mordaunt becomes PM,” said arch-Eurosceptic Baker, a supporter of the foreign secretary.

Mr Tugendhat, the only candidate never to have held ministerial office, said he was “overwhelmed” by the scale of his support, which he said showed the country was “ready for a clean start” which would “put trust back into politics”.

His team indicated he would wait until Tuesday to decide whether to endorse one of the remaining candidates, with backer Anne-Marie Trevelyan saying that his supporters will “travel as a pack”.

The foreign affairs committee chair was the subject of immediate approaches from rival camps, with Ms Mordaunt describing him as “a friend and colleague who I’ve admired for years.”

Ms Mordaunt, who shares a military background with Mr Tugendhat, added: “I know that we are both committed to a clean start for our party and I believe he is one of the strongest assets on the Conservative green benches.”

Ms Mordaunt supporter George Freeman said her camp was pleased that she remained clear of the foreign secretary, despite losing a vote from the last round.

“After three days of pounding in the media I’m delighted she’s held second place,” the former science minister said. “Nobody has been attacked more savagely in the press.”

Former Tory leader Iain Duncan Smith, insisted Ms Truss “has got momentum and she will maintain that momentum”. He added: “Penny is stalling… and I believe Liz is in the right place to do this.”

Chloe Smith MP, a member of the One Nation caucus campaigning for Ms Truss, pleaded for fellow moderates in the party to look again the foreign secretary for the leadership.

Ms Mordaunt came under fire from her own boss for skipping work at the Department of International Trade to pursue her leadership ambitions.

Ms Trevelyan, the international trade secretary, told LBC radio: “There have been a number of times when she has not been available, which would have been useful, and other ministers have picked up the pieces”.

A leadership debate between the final three contenders scheduled for Tuesday night on Sky News was canceled over concerns about increasingly nasty “blue on blue” attacks damaging the Conservatives.

Mr Johnson insisted the party would soon “coalesce in loyalty” around a new leader.

But former Tory donor John Armitage said MPs inside the Westminster bubble were unaware of the extent to which the party had been left in “deep s ***” by its departing leader.

The hedge fund billionaire, who has given Tories £ 3m over recent years but stopped donations in February complaining of a “lack of honor”, told the BBC: “Most MPs and most commentators do not really realize what deep s *** the Conservatives are in.

“I think people in the country are fed up with a regime that tolerated a dishonorable and bad prime minister for a long time.”