Todd & Julie Chrisley Slam Daughter Chloe’s Biological Mom – Insisting She Has ‘No Rights’ To The 10-Year-Old! 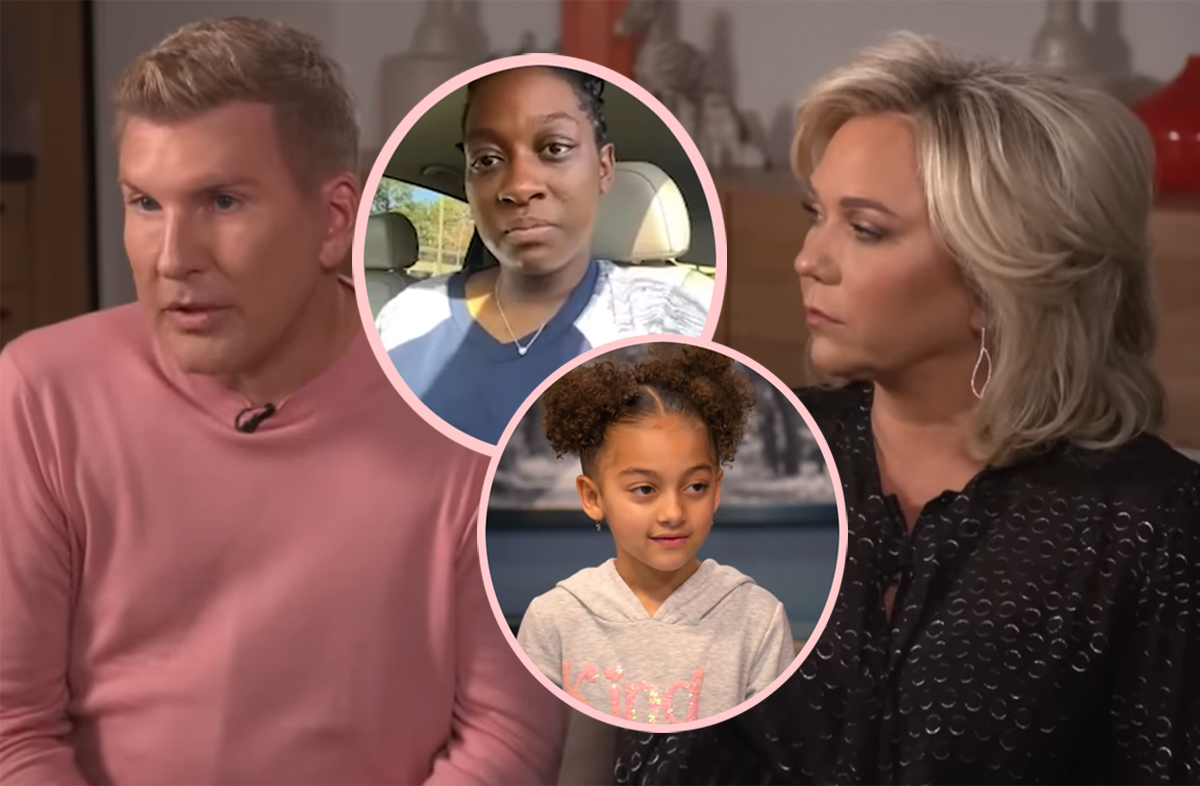 Todd & Julie Chrisley are making it crystal clear that Chloe Chrisley‘s biological mother has no legal rights to the 10-year-old!

As we previously reported, the pair adopted the daughter of their estranged son Kyle Chrisley back in 2016 after her biological mom lost custody. Angela Johnson gave up her rights after being arrested for allegedly filing a false application for Medicaid, making it easy for a judge to grant custody to the Chrisleys. But after Todd and Julie were sentenced to 12 and 7 years, respectively, for tax fraud, the math changed.

Angela shared with TMZ her intentions “to go back to court” and regain custody of Chloe. The Chrisley Knows Best star clapped back at the mother, telling People in a statement:

“Todd and Julie are saddened by the unfortunate and misleading narrative currently being portrayed in the media regarding Chloe.”

A pointed but rather tame response, considering. But Todd and Julie aren’t holding back their feelings on the matter now! During an episode of their Chrisley Confessions podcast on Wednesday, the couple slammed Angela’s efforts to get custody again, this time with some real teeth! First, they say they haven’t heard from her since 2017:

“It’s ironic that her biological mother would come forward now when she has not been in her life since 2015. Angela Johnson surrendered her parental rights on March of 2017, and we never heard from her again. Chloe was legally adopted by myself and by Julie. She is legally our child. We will be the ones who decide, if and when the time comes, as to who will be her caregiver. We’re not going to discuss who that’s going to be, because we don’t owe that to the world and that’s our private matters. At the end of the day, Chloe’s family is who Chloe has been raised with.”

On the one hand that seems fair, but also… they didn’t complain when Angela’s legal troubles caused her to lose custody. Should the same happen here?

Not according to Todd! While the family is going through a tough time after Julie and Todd’s sentencing and now this potential custody battle, the 53-year-old reality star vowed to make sure the child’s life is “unaltered” as much as possible:

“Chloe is a very bright, intelligent, charismatic, funny, beautiful child, who has a heart of compassion. Her life is going to be as unaltered as it possibly can be based on what Julie and I have the ability to control.”

Focusing the conversation back on Angela, Todd stressed that she has zero rights to Chloe since she gave them up five years ago:

“Angela Johnson, she literally surrendered her rights to her child. She did this in front of a judge. The judge explained to her, ‘You understand what you’re doing? You understand that you’re surrendering the rights to your child?’ And then explained that she had x amount of days to come back in and rescind that. [The judge] asked her in the hearing that day, ‘Has anyone promised you anything financial? Has anyone threatened you?’ The answer to all of that is no and that’s in writing. It’s in a court document. We’re not posting court documents because they are supposed to be private.”

“Just so the record is very, very clear. Angela Johnson has no rights to Chloe. Her rights were terminated. She has been legally adopted.”

Although Angela gave up her “rights” to the kid, Todd alleged he and Julie have attempted to have a relationship with the mom, even going as far as to give her money, a home, a car, and funds to attend nursing school:

“We tried to do the right thing with Angela. We provided her housing for her to get on her feet at some point when she was homeless. I did not want to have to say to Chloe when she was 18 years old that I allowed her mother to be in the streets. I did not owe this to her mother. I did not owe this to go out here and provide housing for her. All the woman had to do was pay the $258 a month in the HOA fee for the condo we bought for her to live in until Chloe was 18 years old. At that point, the condo would’ve reverted back to Chloe and Chloe could’ve done whatever she wanted to with it.”

“She could’ve allowed Angela to live there or she could’ve sold it and done what she wanted to with the money. The woman would not even pay the $258 a month. I’ve given this woman money to go to school for nursing, only to find out that she never completed any of it. She was just using us for the money.”

Furthermore, Todd claimed that Angela would not show up to see Chloe when she did have joint custody with the television personalities — leading them to move forward with the adoption:

“When she didn’t have a car in the initial beginning, when we got joint custody of Chloe with Angela, Angela didn’t have a car that would get her back and forth. We bought her a car, a Toyota Prius, and gave it to her free and clear for her to be able to meet Julie every other week in Commerce, which was halfway, Commerce, Georgia. She wouldn’t show up half the time. She would never even call and tell us that she wasn’t showing up. Julie would drive that hour and a half there, sit and wait in the parking lot for 45 minutes. She wouldn’t answer the phone. We didn’t know anything. And then I would tell Julie, ‘Bring her back home.’ That’s what prompted us to move forward with the adoption.”

While Angela claimed to TMZ she was “pushed out of” Chloe’s life, Todd asserted on the podcast that wasn’t true:

“Angela terminated her rights voluntarily. She wasn’t threatened. She wasn’t coerced. And then for me to see… that she’s now trying to squeeze out five minutes of fame out of herself to put herself back out here. What she needs to do is spend more time trying to find a better wig and less time trying to go out here and get more time on the camera.”

The podcast host then concluded his rant about the situation by threatening Angela that they’ve kept all their communication from over the years and will release them if they have to:

“I know you listen to this, Angela. What you need to do is understand that I have retained every text message, and so does Julie, with any communication that we’ve ever had with you. We have not released those, but if we need to we will. That’s just drawing our line in the sand. You have had no relationship with Chloe. She does not have any relationship with you. You’ve never reached out to talk to her. You’ve never sent her a Christmas gift or a birthday gift. You’ve never done anything for her.”

At this time, Angela has not filed any documents but told TMZ she’s “in the process of getting some legal papers” submitted. We’ll have to see what happens next with this situation, but it sounds like Todd and Julie aren’t going down without a fight. For now, though, Chloe and her 16-year-old brother Grayson Chrisley will remain in the custody of Savannah Chrisley.

Thoughts on the situation, Perezcious readers? Let us know in the comments.

What is AppleCare Plus and should you get it?