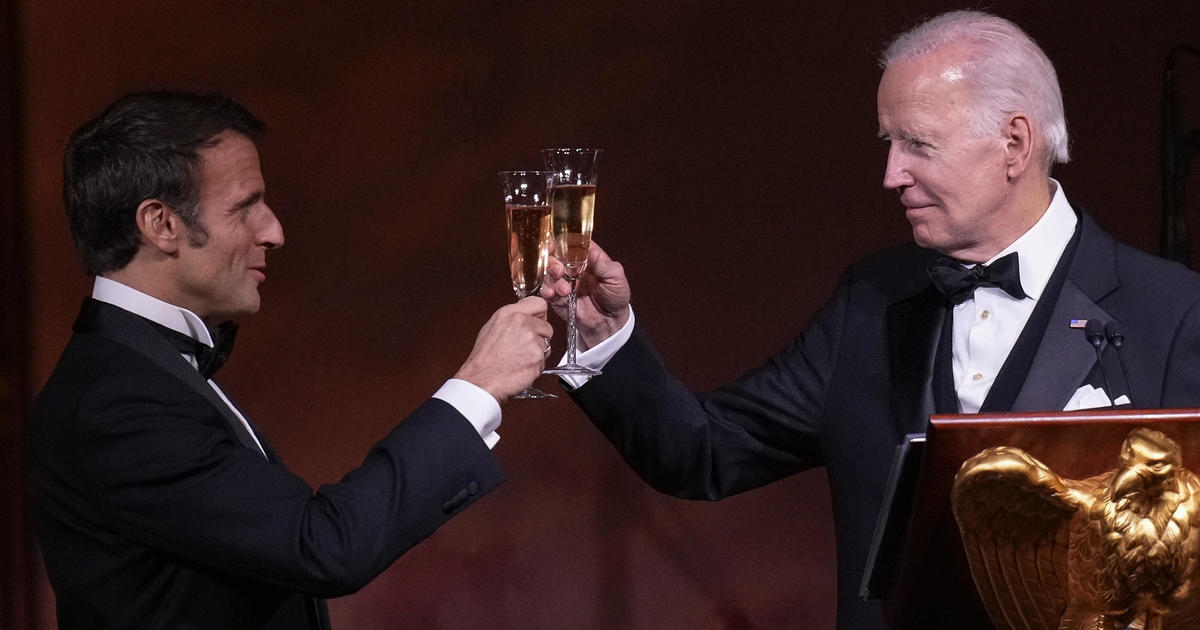 Under a massive tent constructed on the White House south lawn and amid more than 300 guests seated at candlelit tables, President Biden, first lady Jill Biden and French President Emmanuel Macron playfully toasted to the American president’s forthcoming reelection campaign during last week’s state dinner, yet another sign that the White House is preparing for a 2024 bid.

The toast was confirmed to CBS News by a person familiar with the scene.

The lighthearted exchange came as the first lady — seated at the head table with the president, Macron and his wife, Brigitte, House Speaker Nancy Pelosi, other Democratic Party leaders and the actress Ariana deBose — described to dinner guests how her exercise routine also helps clear her head, especially when she’s on the campaign trail.

That led Macron to ask if Jill Biden is ready for a reelection campaign. The first lady said she is, prompting the French leader to turn to Mr. Biden and suggest a congratulatory toast.

Macron then led the table in a toast to Mr. Biden’s 2024 campaign by raising a glass of wine. Mr. Biden toasted with a glass of Coca-Cola, according to the person familiar with the exchange.

“As the President has said, he intends to run for reelection and that is something both Dr. Biden and the family fully support,” a senior Biden adviser told CBS News.

The French Embassy in Washington had no comment when asked by CBS News.

News of the toast was first reported by The New York Times.

That the first lady expressed such full-throated support and anticipation of a 2024 campaign is an important sign to those inside the White House and across the Democratic Party who are awaiting a final decision. Jill Biden is known to be the president’s most trusted adviser and the one person other than the president who could put a stop to another campaign. And the first lady’s comments signal that despite months of public comments where the president seemingly hedges his commitment to another run, the first couple is making plans to do so.

Senior aides have also signaled a campaign is in the works. On Monday, White House chief of staff Ron Klain told The Wall Street Journal CEO Council that he believes “it’s his intention to run” and that Mr. Biden will do so “shortly” after the new year.

White House Press Secretary Karine Jean-Pierre told reporters Tuesday that what Klain said “was certainly in line with what the president has said most recently about 2024.”

Ed O’Keefe is a senior White House and political correspondent for CBS News based in Washington, D.C.