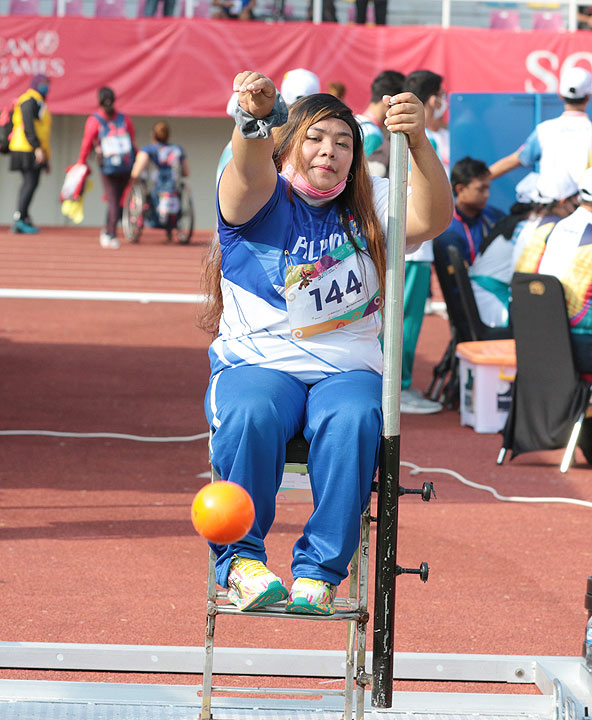 THROWER Cendy Asusano emerged the lone bright spot to what had been a slow and uneventful day for the Philippines, snaring the women’s shot put F54 gold medal in the 11th Association of Southeast Asian Nations (ASEAN) Para Games in Solo, Indonesia.

Mrs. Asusano heaved a 5.65 meters on her fourth attempt to not only capture her second gold after ruling javelin on Monday, but also eclipse her old mark of 5.50m she registered in copping one of the three mints she took home in the 2017 edition of the biennial meet in Kuala Lumpur, Malaysia.

But she will no longer match her triple-gold haul last time as she was disqualified in the discus throw the day before that was caused by an accidental loose strap on her throwing chair, which was prohibited, that denied her that important mint.

“I just didn’t think of it (disqualification) anymore so that I won’t be stressed. And I’m thankful to God that I won,” said the proud Pasig native.

It was the lone gold the country produced in the day after an eight-gold deluge that was highlighted by the magnificent chess team’s four-gold rampage in the standard event the day before.

It somehow slowed down the country’s bid in surpassing, if not replicating, its 20-gold, 20-silver and 29-bronze harvest in Kuala Lumpur.

At press time, the country had amassed 14 mints in all.

It was not as if the Filipinos, whose trip here is being bankrolled by the Philippine Sports Commission, didn’t try.

Over at the Jatadiri Sports Complex in Semarang, swimmers Roland Sabido and Arnel Aba added silver and bronze medals, respectively, to the country’s collection in the stint backed by the Philippine Sports Commission.

Table tennis likewise delivered a bronze through the Class 10 mixed doubles tandem of Pablo Catalan, Jr. and Minnie Cagdag, who took a 6-11, 8-11, 4-11 loss to Indonesia’s Komet Akbar and Aminah in the semifinals.

Overnight, judo also gave the country its first medal in the sport courtesy of Peterson Onas in the men’s J1-60kg class.