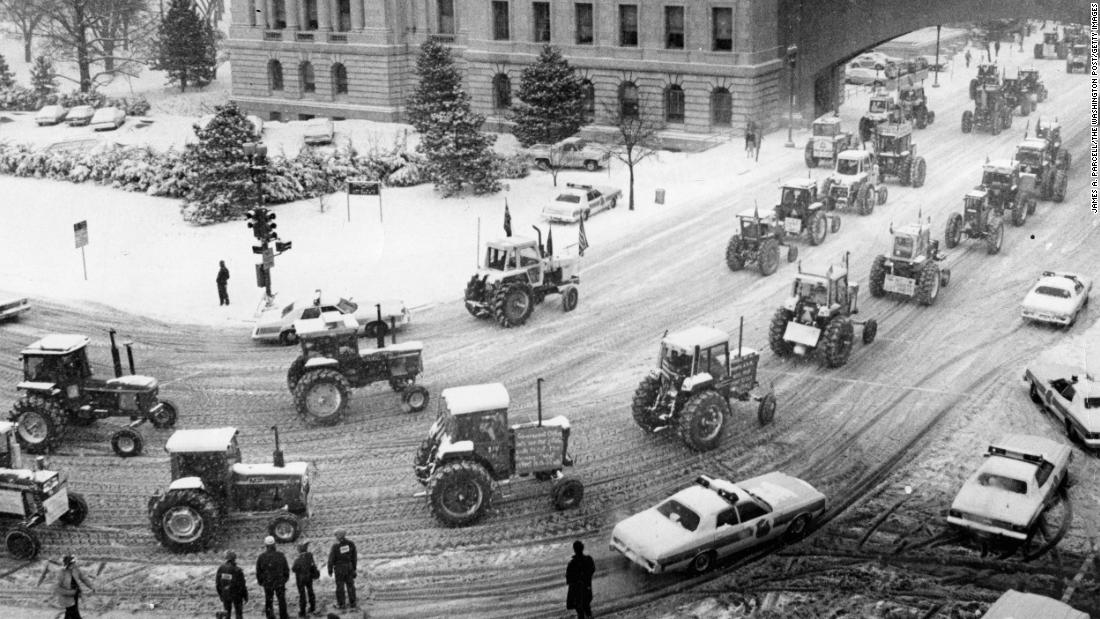 The rich but largely forgotten history of people protesting high interest rates at the Federal Reserve seems nuts today, when Americans are so used to such easy access to borrowed cash.

We’re talking here about the late ’70s and early ’80s, when high inflation got so baked into the American psyche that killing it took a shock to the system — leading to everyday interest rates on par with what credit cards charge today.

The medicine to cure inflation kicked off a double-dip recession — where a recession was followed by a brief recovery and then another recession — and put millions of Americans out of work.

The architect of that shock, former Federal Reserve Chairman Paul Volcker, is today hailed for doing the politically hard thing and creating the environment for decades of subsequent economic growth.

But he weathered criticism as the inflation died down.

The President who put Volcker in charge of the Fed, Jimmy Carter, lost his job amid a crisis of confidence and malaise from voters. Ronald Reagan would renominate Volcker to a second four-year term before the two fell out.

The Volcker shock. People this week are recalling the “Volcker shock,” which altered the course of the US economy back then, as today’s Federal Reserve imposes its second massive rate hike in a row.

Read these articles from CNN Business for the full story on Wednesday’s hike:

Now, back to Volcker.

What kind of rates were they looking at as Volcker took on inflation?

Volcker’s legacy is imposing. Every story you read about Volcker will mention he was tall, at 6 feet, 7 inches. But he has an outsize legacy to match.

In addition to delivering the tough medicine that ended the runaway inflation of the ’70s, he’s credited with the “Volcker rule,” which for a time kept banks from trading their own assets.

Chris Isidore wrote CNN’s obituary for Volcker back in 2019. I asked him how Volcker might view today’s fight against inflation.

He made these important points:

Volcker was willing to make hard choices. Volcker believed the Fed had to do whatever it took to bring prices back in line. Under his leadership, the central bank raised its benchmark rate as high as 19% in January 1981.

There were consequences. His high interest rate policy brought on not only one, but two recessions in short order: one from January 1980 that ran through July ’80, which was followed in short order by the recession that started in July ’81 and went through November 1982.

By November 1982, the unemployment rate reached 10.8% That was almost a full percentage point higher than it hit in the wake of the Great Recession of 12 years ago.

It was far worse inflation than we have today. Volcker had far more serious inflationary pressures to battle, with the rate of increase in the Consumer Price Index hitting a high of 14.8% in March 1980, far above the current 8.3% rate.

Volcker faced a wage-price spiral. Many more workers had union contracts than today, and many of those contracts had cost-of-living-adjustments, or COLA, clauses built in that automatically raised wages when prices went up. That’s not the case today.

Today the Fed has less control. Many of the factors in today’s high inflation are outside of the Fed’s control, including spikes in oil and food prices caused by the war in Ukraine, and supply chain problems caused by the Covid-19 pandemic, which are still raising the cost of production of many products and causing shortages in the face of strong demand.

Inflation can become a self-fulfilling prophecy

Much of the Fed’s job in taming inflation is to convince people that inflation has been tamed, according to the former Fed official David Wilcox, who is now a senior fellow at the Peterson Institute for International Economics.

Just before this latest rate hike, he wrote an opinion piece for CNN Business, in which he offered two paths for the US:

The optimistic view is that people believe inflation is under control. “If households and businesses maintain the view that inflation will return to 2% in the not-too-distant future, the Fed’s task in accomplishing that outcome will be much easier,” Wilcox wrote.

The pessimistic view is that people think it’s here to stay. “The experience of escalating prices at the gas pump and grocery store over the past year may have conditioned households and businesses to expect more of the same,” Wilcox wrote. “In that case, the Fed will need to raise its policy interest rate much higher — and the economic slump ahead will be much deeper.”

Wilcox argued Volcker was trying to break Americans out of a general acceptance of too-high inflation. Today, Wilcox sounds optimistic and predicts inflation will be lower within a year and in the target neighborhood of 2% within two or three years — although who knows what will happen with the pandemic and the war in Ukraine.

It’s usually in glowing terms. This spring, Powell commended Volcker for fighting on two fronts, “slaying, as he called it, the ‘inflationary dragon’ and dismantling the public’s belief that elevated inflation was an unfortunate but immutable fact of life.”

Let’s hope it’s not and these interest rate hikes don’t have the same unintended consequences that Volcker’s had more than 40 years ago.