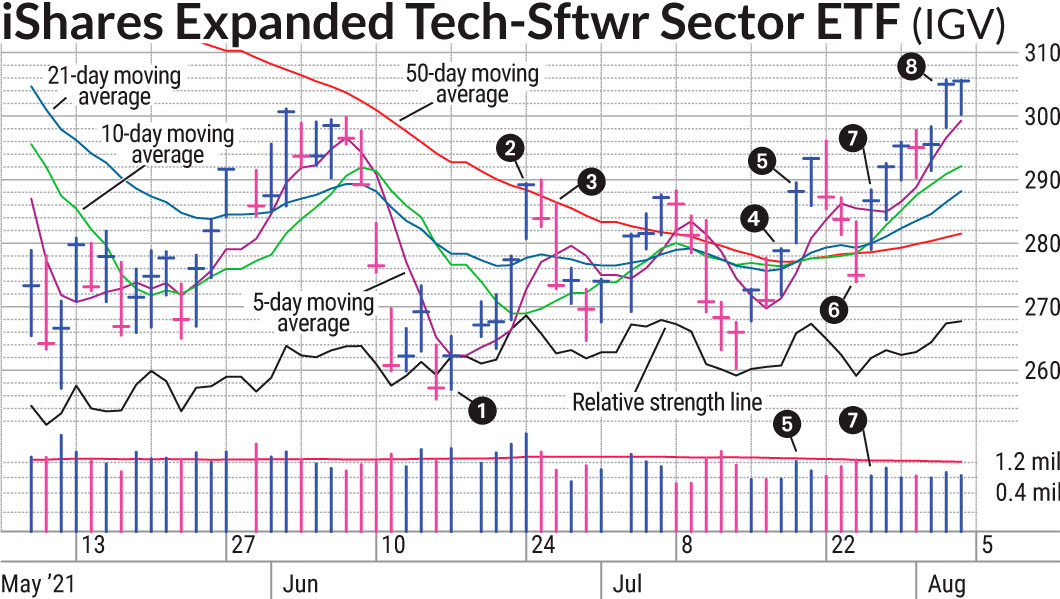 When looking at the latest stock market rally, it might seem an easy time for making money. For most growth investors, that hasn’t been the case. Swing trading a software exchange-traded fund can show some of the difficulties we faced.


The Problems Of The Current Market

Every market cycle faces its own challenges. Bill O’Neil, founder of Investor’s Business Daily, remarked “they aren’t going to hand you money on a silver platter.” This rally in particular has been fueled by many of the most beaten-down stocks. Not necessarily where we like to mine for prospects. Especially considering that according to IBD research only one in eight former leading stocks go on to lead another market cycle. Examples like Apple (AAPL) are rare; most former leaders fall into obscurity.

An ETF helps in this regard because you can often play strength in a broader area as opposed to placing your bet on a single stock. Of course, if you choose the right stock you get rewarded for the risk as opposed to watered-down results of an ETF. There is also a matter of the ETF’s holdings and weights. Are there heavier weights in a few stocks and are they the leaders, or is it spread out among many with equal weights?

This market rally also started as earnings season ramped up. With many of the economic uncertainties underpinning earnings reports, it’s been difficult starting positions in individual stocks when a quarterly report loomed.

A lack of volume in many individual names isn’t unusual in summer months. But it makes it difficult to find conviction in stocks when there isn’t evidence of institutional interest.

Finally, sector rotation proved to be especially quick as money darted about in response to earnings and policy decisions.

The above challenges led to our decision to trade iShares Expanded Tech Software Sector ETF (IGV). The stock market’s most recent bottom in June (1) started a strong rally in the software ETF as well as the general market. When the stock market triggered a follow-through day (2), IGV was up over 13% from its lows. But it faced resistance at its 50-day moving average and fell sharply just a couple of days later (3). This also corresponded to a bearish signal that the market rally was in trouble as the Nasdaq closed below its follow-through day.

Fast forward a couple of weeks, and the market rally improved. The software ETF got back above its 50-day line (4) and then followed up with even stronger gains the next day (5). That prompted an add to SwingTrader, and the volume provided confirmation that money was moving into the sector. Also, for the stock market, these days triggered what we call subsequent follow-through days. They are proof of strength in a rally and help offset the earlier negative signal.

But here’s where sector rotation added trouble. Just a few days later, tech fell out of favor. IGV fell below the low of our entry price and sliced ​​through nearly all the moving average lines we follow closely (6). Swing trading still relies on a trend in order to succeed. Granted the trends can be shorter, but what we saw in July was even too short for our usual swing trading style. So we exited the ETF.

IGV bounced back strongly the next day but the rebound lacked conviction (7). Volume was much lower than the downturn. But the ETF, and the Nasdaq composite in general, still saw strong gains over the next week (8). Unfortunately, we didn’t participate.

Again, it’s easy to say a trade is advisable when you know what happens. But in the moments of our decision, the choices haven’t been as clear. It’s one of the reasons we’ve raised exposure in this rally but have remained largely on the sidelines.

More details on past trades are accessible to subscribers and trialists to SwingTrader. Free trials are available. Follow Nielsen on Twitter at @IBD_JNielsen.

How To Surf The Market Whether Smooth Or Choppy Waters

Get Real-time Analysis During Market Hours By Watching IBD Live

MarketSmith: Research, Charts, Data And Coaching All In One Place