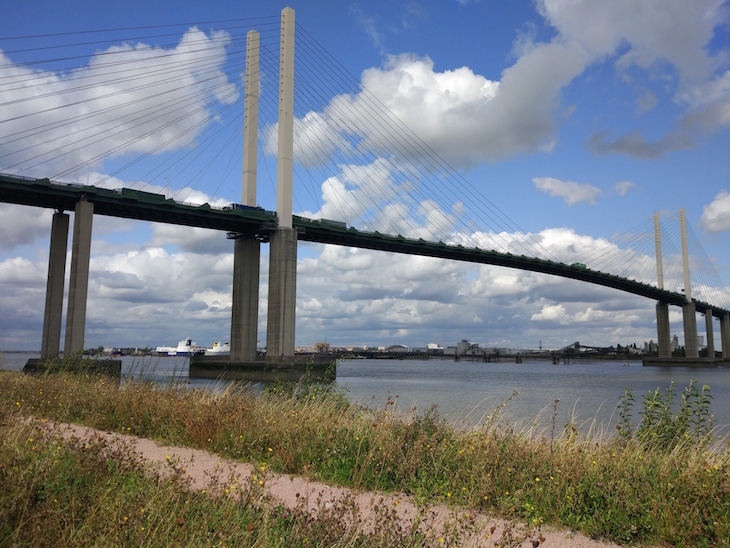 It is the latest section of the England Coast Path to open and offers an unbroken, 47.12 mile (75.85 km) route out to Grain, an area on the Kent coast where the Thames Estuary meets the River Medway and the sea.

Leaving the Woolwich Foot Tunnel, the route clings to the south bank of the Thames and passes through salt marshes, the Wadden Sea, streams and beaches as it gets closer to the sea. You will pass under the giant Queen Elizabeth II road bridge at Dartford, the busiest crossing of the estuary in Europe – and a symbol that you have left London for quieter skies.

Wildlife on the coastal path

Keep your eyes open for all kinds of wildlife on the Swanscombe Peninsula, a place of particular scientific interest and home to 1,700 invertebrate species, including over a quarter of Britain’s water beetle species. It is one of just two places in the UK where the critically endangered noble jumping spider is found. This is also where there are hotly debated plans to build a giant amusement park.

The Cliffe Pools Nature Reserve is a popular place to watch birds, with avocet, knot and dunlin visible during the winter months. Gray seals are also occasionally seen along this stretch of coast. Between Cliffe and Allhallows, the route stretches more than 12 miles without passing another village or parking lot – what about loneliness?

There is also plenty for history buffs to look at. Pill boxes and anti-tank barriers left from both world wars lie along the shoreline, and there are plenty of forts – the 1860s Shornemead Fort is east of Gravesend, and the town’s New Tavern Fort opens to visitors occasionally on summer weekends. Further east, the impressive Cliffe Fort is unfortunately not open to the public, although you can wander around the outer walls.

When you reach the Grain itself, you will be rewarded with views of the Thames and Medway confluence, over to Sheerness on the Isle of Sheppey and Southend over the Thames in Essex. Turn your eyes to the water and keep an eye on the masts of SS Richard Montgomery, a World War II cargo shipwreck still loaded with tons of explosives – its masts to be dismantled this summer to (hopefully) prevent a potentially catastrophic explosion. It is located off the coast of Grain and Sheerness.

Although not quite as historic, Britain’s largest pylon can also be seen along the route, located at the Swanscombe Marshes, and the collaboration with an equally towering pylon across the Thames in West Thurrock.

Getting there (or more importantly, back)

Moped after the 47 miles walk? There is no station at Grain, but you can hop on a local bus to Strood station for trains back to London. Or if you do not feel like walking it all at once, the stations are Woolwich Arsenal, Erith, Slade Green, Greenhithe and Gravesend along the entire route, so you can tick one section at a time. Soon you may also be able to travel by river boat between Gravesend and central London.

Alternatively, board the Gravesend to the Tilbury Ferry and continue your adventure on the other side of the Thames, in Essex.

Beyond Woolwich in the other direction, the route joins the Thames Path National Trail, which continues through London and west, to the source of the Thames in the Cotswolds. Walking both paths allows you to follow the Thames in its entirety, from source to sea.

Find out more, see the route and plan your walk on the National Trails website.