This Autonomous Robot Might Soon Make Food Deliveries in Airports

Sometime next year, an autonomous robot might deliver food from an airport restaurant to your gate.

The idea for Ottobot, a delivery robot, came out of a desire to help restaurants meet the increased demand for takeout orders during the COVID-19 pandemic. Ottobot can find its way around indoor spaces where GPS can’t penetrate.

Ottobot is the brainchild of Ritukar Vijay, Ashish Gupta, Hardik Sharma, and Pradyot Korupolu. The four founded Ottonomy in 2020 in Santa Monica, Calif. The startup now has 40 employees in the United States and India.

Ottonomy, which has raised more than US $4.5 million in funding, received a Sustainability Product of the Year Award last year from the Business Intelligence Group.

Today Ottobot is being piloted not only by restaurants but also grocery stores, postal services, and airports.

Vijay and his colleagues say they focused on three qualities: full autonomy, ease of maneuverability, and accessibility.

“The robot is not replacing any staff members; it’s aiding them in their duties,” Vijay says. “It’s rewarding seeing staff members at our pilot locations so happy about having the robot helping them do their tasks. It’s also very rewarding seeing people take their delivery order from the Ottobot.”

For 15 years Vijay, an IEEE senior member, worked on autonomous robots and vehicles at companies including HCL Technologies, Tata Consultancy Services, and THRSL. In 2019 he joined Aptiv, an automotive technology supplier headquartered in Dublin. There he worked on BMW’s urban mobility project, which is developing autonomous transportation and traffic-control systems.

During Vijay’s time there, he noticed that Aptiv and its competitors were focusing more on developing electric cars rather than autonomous ones. He figured it was going to take a long time for autonomous cars to become mainstream, so he began to look for niche applications. He hit upon restaurants and other businesses that were struggling to keep up with deliveries.

Ottobot reduces delivery costs by up to 70 percent, Vijay says, and it can reduce carbon emissions for small-distance deliveries almost 40 percent. 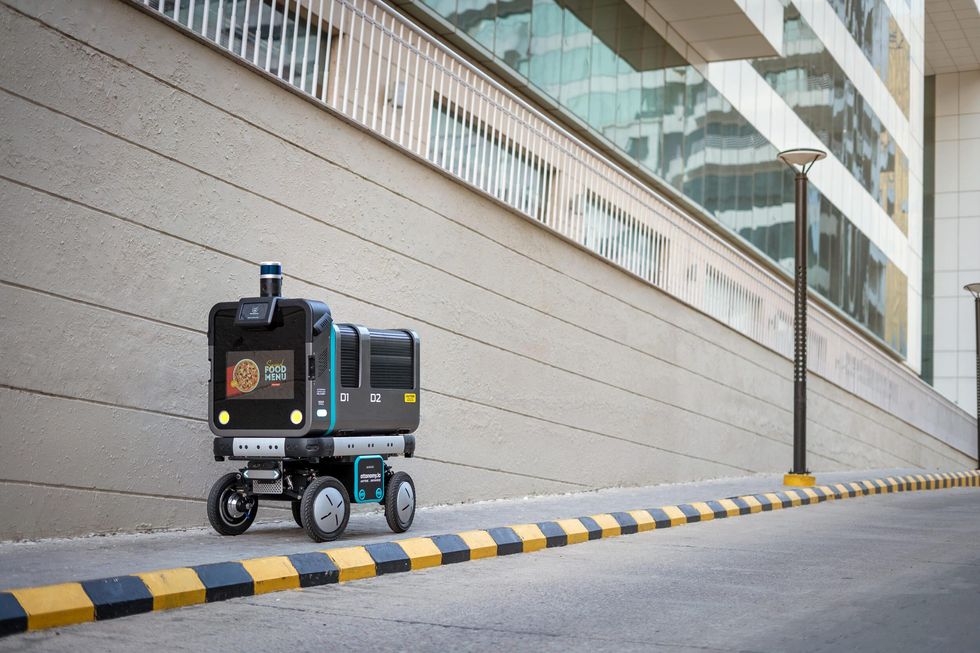 Using wheelchair technology, the Ottobot can maneuver over curbs and other obstacles. robot on wheel strolling down a city sidewalk

Ottobot as an airport assistant

Within the first few months of the startup’s launch, Vijay and the Ottonomy team began working with Cincinnati/Northern Kentucky Airport. The facility wanted to give passengers the option of having food from the airport’s restaurants and convenience stores delivered to their gate, but it couldn’t find an autonomous robot that could navigate the crowded facility without GPS access, Vijay says.

To substitute for GPS, the robot used 3-D lidars, cameras, and ultrasonic sensors. The lidars provide geometric information about the environment. The cameras collect semantic and depth data, and the short-range ultrasonic sensors ensure that the Ottobot detects poles and other obstructions. The Ottonomy team wrote its own software to enable the robot to create high-information maps—a 3D digital twin of the facility.

“Imagine passengers are boarding their plane at a gate,” he says. “Those areas get very crowded. During the robot’s development process, one of our engineers joked around, saying that the only way to navigate a crowd of this size was to move sideways. We laughed at it then, but three weeks later we started developing a way for the robot to walk sideways.”

The team took its inspiration from electric-powered wheelchairs. All four of the Ottobot’s wheels are powered and can steer simultaneously—which allows it to move laterally, swerve, and take zero-radius turns.

The wheelchair technology also allows the Ottobot to maneuver outside an airport setting. The wheels can carry the robot over sidewalk curbs and other obstacles.

“It’s rewarding seeing staff members at our pilot locations so happy about having the robot helping them do their tasks.”

Ottobot is 1.5 meters tall—enough to make it visible. It can adjust its position and height so that its cargo can be reached by children, the elderly, and people with disabilities, Vijay says.

The robot’s compartments can hold products of different sizes, and they are large enough to allow it to make multiple deliveries in a single run.

To place orders, customers scan a QR code at the entrance of a business or at their gate to access Crave, a food ordering and delivery mobile app. After placing their order, customers provide their location. In an airport, the location would be the gate number. The customers then are sent a QR code that matches them to their order.

A store or restaurant employee loads the ordered items into Ottobot. The robot’s location and estimated arrival time is updated continuously on the app.

Delivery time and pricing varies by location, but on average retail orders can be delivered in as quickly as 10 minutes, while the delivery time for restaurant orders generally ranges from 20 to 25 minutes, Vijay says.

Once the robot reaches its final destination, it sends an alert to the customer’s phone. The Ottobot then scans the person’s QR code, which unlocks the compartment.

Pilot programs are being run with Rome Airport and Posten, a Norwegian postal and logistics group.

Ottonomy says it expects Ottobot to be used at airports, college campuses, restaurants, and retailers next year in Europe and North America.

Why IEEE membership is vital

Being an IEEE member has given Vijay the opportunity to interact with other practicing engineers, he says. He attends conferences frequently and participates in online events.

“When my team and I were facing difficulties during the development of the Ottonomy robot,” he says, “I was able to reach out to the IEEE members I’m connected with for help.”

“Being an IEEE member, for me, is a no-brainer,” Vijay says.

From Your Site Articles

Related Articles Around the Web