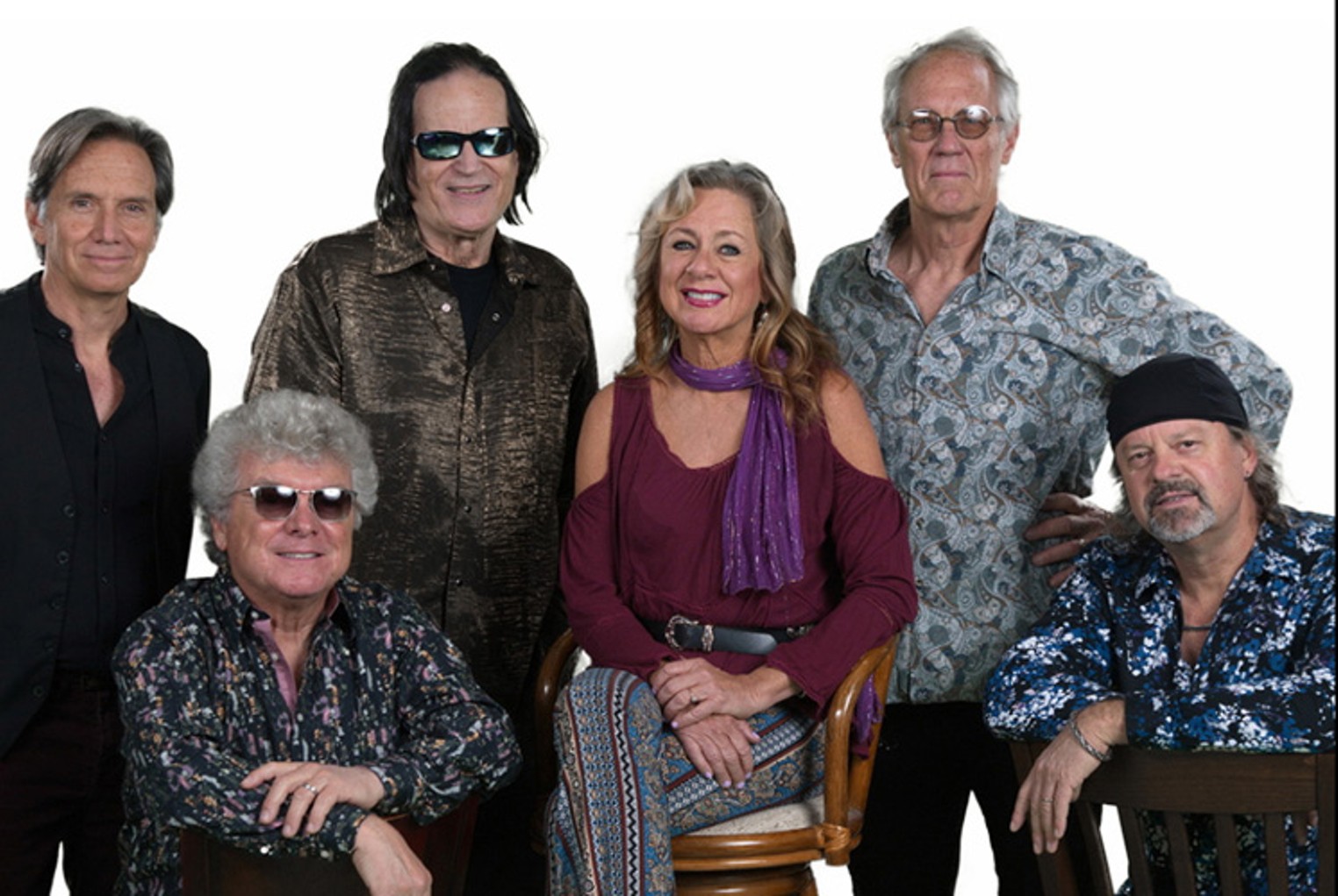 Sometimes, bands can have two entirely separate musical lives. There’s the group that casual listeners “know” from their successful, Top 40 hits. Then there’s a different side understood by more hardcore fans and deep cut listeners. Such is the case with Ambrosia.

Ambrosia’s place in music culture is cemented by a troika of massively successful romantic hits from the late ’70s / early’ 80s. All are still in constant rotation on plenty of Soft Rock and Yacht Rock channels and playlists: “How Much I Feel,” “Biggest Part of Me” and “You’re the Only Woman (You and I).”

But the truth is that Ambrosia started out as much more of a Prog Rock band. Closer to Yes, Genesis and King Crimson than Bread, Firefall or Orleans. And according to drummer Burleigh Drummond, they’re not alone.

“Look at Phil Collins and Todd Rundgren!” he laughs. “But yes, the Yacht Rock [association] has brought in a younger audience for us. We’re still able to slip in a couple of our more musically elaborate tunes. It’s important that we put that out there. And with those songs, we get [better] royalty checks! ”

“It’s given us a platform, especially with our hits,” adds bassist / vocalist Joe Puerta on the same phone call. “But we need a new term, like Yacht Prog!” In fact, only days after this interview, Ambrosia will be playing on the high seas as part of the revivalist group Yacht Rock Revue’s Steal Away cruise to Jamaica.

Closer to Houston, Ambrosia will get to give audiences both sides of their story at the Dosey Doe on March 10. The current lineup includes original members Puerta, Drummond and keyboardist Christopher North. Along with Doug Jackson (guitars), Mary Harris (keyboards / vocals) and Kipp Lennon (lead vocals).

“When ‘How Much I Feel’ came down the pike, the FM stations who had been playing Ambrosia said ‘You deserted us! ” Drummond continues. “But the Beatles did both ‘Yesterday’ and ‘I Am the Walrus.’ Radio was more codified then. But those [three songs] gave us a whole new audience, which was young girls. Nowadays when we play live, it all works together. ”
The quartet who would form Ambrosia did so in 1970. Along with Puerta, Drummond and North, the band included lead vocalist / guitarist David Pack. They had previously gigged under the very-Proggy name of Ambergris Mite.

But — shockingly — they discovered another band was already using the name Ambergris. Puerta opened a dictionary in the same general area, and they came upon “Ambrosia,” the word meaning “nectar of the Gods” in Greek Mythology. It stuck.

Their self-titled debut appeared in 1975, and band scored five Top 40 singles over the next years including first charter “Holdin ‘On to Yesterday,” and the Pack-penned trio of hits “How Much I Feel,” “Biggest Part of Me, ”and“ You’re the Only Woman (You and I). ” There was also a cover of the Beatles ‘”Magical Mystery Tour,” their contribution to one of the’ 70s more offbeat projects film / music projects, All This and World War II.
Their Proggier side came out in tracks like “Nice, Nice, Very Nice” —set to a poem by Kurt Vonnegut, “Time Waits for No One,” “And… Somewhere I’ve Never Traveled” and “Cowboy Star.” Members also collaborated with Alan Parsons on Alan Parsons Project records and were avowed fans of King Crimson and the vocal harmonies of CSNY.

Ambrosia broke up in 1982, the same year they released their fifth and to date last studio album. The original quartet reunited in 1989 while continuing to use touring members and recorded three new tunes for a 1997 anthology. Pack left for good in 2000.

Puerta says hardly a day goes by when someone does not tell him how an Ambrosia song played an important part of their lives. People courted, married, and perhaps even had, um, intimate relations to their music.

“For me it’s gratifying. And some of the fan mail goes even deeper. Some of it says that [our music] actually helped save people lives, ”He says. “Anything that is confirmation you’ve affected people is wonderful.”

Joe Puerta is a different kind of bassist in that he approaches the instrument as more of a lead than simply playing second fiddle (bass?) To the guitar. It’s something he learned on record from some of his own favorite players.

“I started off as a guitarist and had to transition to the mentality of a bassist. I have always favored bass players who do something interesting and add another element to the songs, ”he says.

“Players like John Entwistle, who had the first bass solo in a [rock] record with ‘My Generation.’ And of course, Paul McCartney took it to another level — there’s a whole bass solo under ‘Something.’ But I also love jazz guys like Jaco Pastorius and Charles Mingus. They’re creating melodic interest with the bass. ”

So, given that Ambrosia in 2022 features 75 percent of the original lineup with some extensive history, is there any extra comfort or camaraderie that other ’70s /’ 80s bands with one or no classic current members does not have?

“We have a communication musically that has developed over 50 years,” Drummond offers. “I do not consider myself the greatest drummer in the world, but our rhythm section is great.”

As for new music, Puerta says they’ve been “sitting on” a lot of material that he vows to get out somehow. And Drummond says it’s “some of the best things” the band has ever written. But they are also acutely aware of commercial and publicity realities of legacy bands putting out new music in 2022.

Cut off from their main source of incoming gigging live during the pandemic, members of the group collected government unemployment — and were grateful for it.

Drummond, who is married to bandmate Mary Harris, formed a family group with their singing / instrument playing son and daughter. They also perform on their own and with others, though it was not their original career path.

“My son went to school to become a doctor, and he came back his junior year and said wanted to be a musician. What were we supposed to say! ” Drummond laughs. “And my daughter started out in the Peace Corps. Now, she’ll go out and busk or play in a restaurant table to table and come home with $ 700! ”
Finally, when asked about any special memories of Houston, there’s a silence on the phone. And then a conspiratorial exchange.

“Burleigh, can I tell this story?” Puerta asks.

“Is it about my state of consciousness at the time?” Drummond responds.

“OK!” Puerta starts. “It was I think 1976. Burleigh had gotten wasted and went through some crazy thing and had gotten married just before we got on a plane to Houston. So we said we’d have a bachelor party and went to a strip club in Houston, ”he says.

“We’re sitting in the front row and this girl comes out. And what does she play for her song to strip to? ‘Holdin’ On to Yesterday! ‘ We all jumped up and went ‘Hey, that’s us!’ And the bouncer told us to sit down. ”

The band talked to the woman (named “Candy Kane”) after the show. And the next night — dressed “rather provocatively” —she introduced Ambrosia at the packed Summit before their set opening for Styx.

“OK, but I need to add to the story with what happened before!” Drummond jumps in.

“We were about to go on the road, and I realized I did not have anyone to take care of my cat. He was a huge cat I named Barry White. I panicked. I kind of had a girlfriend at the time and asked her to take care of the cat. And she said, ‘I’ll do it if you marry me.’ ”Drummond recalls. “It was two hours before the flight took off. We ran down, got married. And that’s that. It was a different time, but it did not last. ”

For more on Ambrosia, visit AmbrosiaLive.net