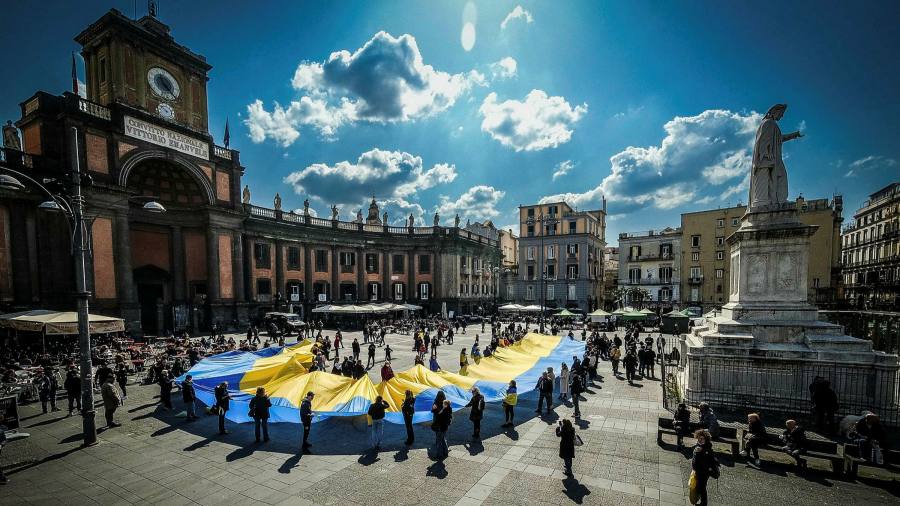 As Ukraine’s economy reeled after the collapse of the Soviet Union, maths teacher Nadiya Zhekha was paid in flour, vodka and other goods. Compelled to seek better earnings for her family, she migrated to Italy in 1996, leaving her then 14-year-old son behind with her elder daughter.

Zhekha, now 66, has worked in Italy ever since as a babysitter and carer for people with special needs. But after Russia’s invasion of her homeland, she opened her small Rome apartment to three Ukrainian war refugees: her daughter and two granddaughters, who met in Lviv days after the attacks began and drove to Rome.

“We did not want to leave our houses or our lives, but she convinced us it was better for our safety,” the elder granddaughter, Vita Zhukovska, 23, said outside Rome’s Ukrainian church. Wiping away tears, Zhekha said bitterly that for Russian President Vladimir Putin “Ukraine is like a doormat to wipe his feet on.”

Since the outbreak of war on February 24, more than 4.3mn Ukrainians have fled their country in search of safety, mostly taking refuge in neighboring states such as Poland, Moldova and Romania. But others have continued on to western Europe, often finding shelter with family, friends and compatriots who previously migrated to the region for better job opportunities.

Italy – which had western Europe’s largest Ukrainian community before the Russian invasion, with about 236,000 people – has so far taken in more than 86,000 Ukrainian refugees and is planning for up to 175,000 arrivals in total if the conflict drags on.

“A lot of refugees are choosing Italy because they have uncles, grandmothers, neighbors and other connections here,” said Francesca Alice Vianello, a sociologist and migration expert at the University of Padua.

Traditionally, Russia was the top destination for Ukrainians seeking foreign jobs. But that changed drastically in 2014 as Moscow’s differences with Kyiv widened, with the former annexing Crimea and Ukraine signing an integration agreement with the EU.

Between 2014 and 2019, 3.4m Ukrainian citizens received first-time residence permits from EU member states, making the country the bloc’s biggest source of external labor, according to the Vienna-based International Center for Migration Policy Development.

Ukrainians sent a record $ 19bn in home remittances in 2021 – equal to about 12 per cent of gross domestic product, according to the World Bank. Around two-thirds of these remittances came from Poland. Remittances from Russia plunged from around 25 per cent of total inflows in 2015 to about 5 per cent last year.

In Italy, women make up nearly 80 per cent of Ukrainian migrants. Many are carers for elderly Italians or shoulder other domestic tasks, as Italian women take up more jobs outside the home. Many Ukrainians live in the homes of their employers.

“In the past 20 years, there has been a great increase in demand for care and domestic work to fill the gap left by Italian women employed in the labor market,” said Vianello. “The Italian welfare state is not able to satisfy the demand for care; this demand has been satisfied by migrant women. ”

While relatives or acquaintances have taken in most Ukrainian arrivals, some are being sheltered in reception centers. The Italian government has allocated € 428mn to help Ukrainians with accommodation, healthcare and livelihood support this year.

Some refugees have already found work and their own accommodation. Olena Ivanova, 38, arrived in Italy on March 6, after a six-day journey from her hometown Kharkiv, Ukraine’s second-biggest city which was bombed by Russian forces in the early weeks of the war. The hair stylist has landed a job at a Rome salon and been able to rent an apartment – and several of her Kharkiv clients have also arrived.

“I’m lucky – I could take my profession with me,” she said, adding “Rome makes me feel much better every day.”

Iuliia Khimenko, a 30-year-old translator, suffered more than a week of anxious days and sleepless nights as her parents rebuffed her pleas to join her in Rome. “You are afraid to go to sleep because you do not know if you will wake up an orphan,” the younger woman said. “But it’s more difficult to go than people think. Everything they worked for is there. ”

Her father Serhii, a retired pharmacology professor from Kharkiv, soon realized Moscow and Kyiv would not quickly resolve their differences.

“We understood that we were actually the target,” he said. “We are Russian-speaking, and Putin expected we would join them and be happy the Russians had arrived. When they found resistance they took revenge, bombing us so hard. ”

So on March 2, the elderly couple walked 10km to Kharkiv’s train station, each carrying just a single small bag. After leaving home at 7am, they managed to board a packed train after midnight, and rode 20 hours to Lviv, with Serhii standing all the way.

Svitlana, Iuliia’s mother, ran a medical diagnostics lab in Ukraine but said she would “go and clean somebody’s house if this goes on”, reflecting the financial challenges of exile.

For some refugees, however, Italy’s physical safety cannot compete with Ukraine’s emotional pull.

Zhukovska, who works for a tech company back home, and her mother returned to Lviv a few days ago to reunite with loved ones left behind. Her 16-year-old sister remains in Rome with Zhekha, the carer.

“Every day my grandmother is trying to convince us to stay, but it’s hard to live in a foreign country without our money, without work,” the young woman said before her departure. “People do not want to be refugees. We do not want to start a new life abroad. I want to be in my place, my country. All that we have in our lives is there. ”

Video: Ukraine’s battle of the airwaves