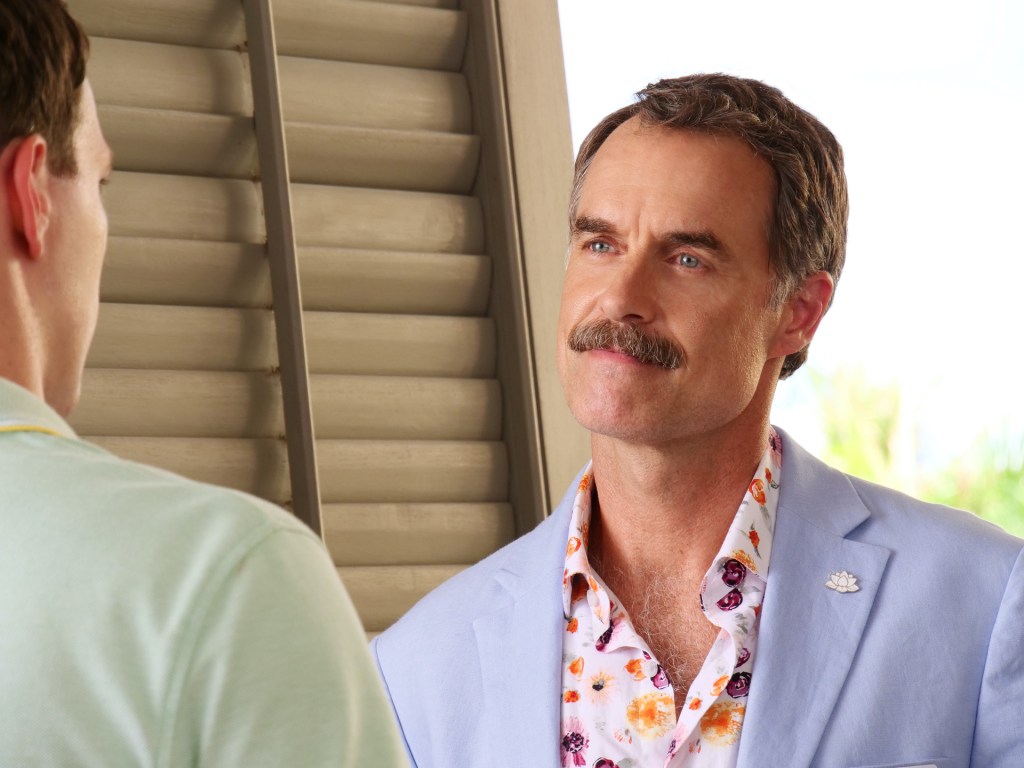 It’s not often an actor can work for 35 years and suddenly make the leap into serious, household-name fame. But that’s exactly what happened to Murray Bartlett. The Australian began acting back in 1987, and while he landed a plethora of projects in his career, he says, “I haven’t really had that many choices along the way.” Then came The White Lotus. And Bartlett’s portrayal of fussy, tortured hotelier Armond took him from working actor to the kind of famous that inspires Halloween costumes and selfies on the street.

He never expected this new renaissance in his career, and certainly not in the middle of a worldwide lockdown. Getting the role in the first place was a “very weird, specifically pandemic experience,” he says. After one self-tape, Mike White, the show’s creator, writer and director, invited him to the shoot location of Hawaii. Bartlett figured, “Why wouldn’t you take a leap with someone like Mike White?” Reading the rest of the scripts on the plane, he discovered Armond’s full arc, which he found “daunting, in a great way,” he says. An unsurprising reaction perhaps, given that Armond gets to indulge in not only a fantastically eyebrow-raising sex scene, but also, notoriously (spoiler alert) defecates in an errant guest’s suitcase.

Over a nightmare week in Armond’s life, the demanding and dysfunctional guests at The White Lotus resort gradually break his spirit — and his sobriety to boot. He’s faced with Connie Britton’s horrific momfluencer, the entitled tantrums of Jake’s Lacy’s honeymooner, the drug-fueled exploits of Sydney Sweeney and Brittany O’Grady’s spiteful, sulky teens, and the truly deranged Tanya, played by Jennifer Coolidge. After five years of abstinence, Armond falls off the wagon in spectacular style, and who can blame him? “It’s a brilliantly written character in that way,” says Bartlett, “in that his role as a manager of the hotel is to keep up this public face.” That public face masks the internal struggle of a man trying to stay sober while under impossible duress.

The pandemic also provided the unique opportunity to film at the Four Seasons Resort in Maui, which was shut down when production started. “We were pulled out of our Covid pods and taken to this amazing TV camp on the beach,” Bartlett says. “It was such a unique experience.” But then, as the hotel partially re-opened halfway through production, they were forced to shoot his scenes out of sequence. Bartlett felt it was important to plot moments in Armond’s drug journey and how that would affect his behavior, which was difficult to track with the schedule. But luckily, White was there every step of the way. “Having the creator-writer-director there with you is such a fantastic experience, because you’re with the source of the material.”

Together, they managed to keep track of Armond’s timeline while still playing in the moment and keeping in mind their most important objective: keep him relatable throughout his downward spiral. “He’s a big character in a wonderful way and I wanted to lean into that, but also make sure he felt human and vulnerable, and not like a caricature,” Bartlett says.

That does not mean they were not willing to go a little crazy with some of the scenes, hence the infamous suitcase scenario. Bartlett calls that particular scene a testament to the brilliance of White. “Mike takes things to the absolute limit, and he lets characters really follow through with their intentions, and I think that’s the brilliance of that poop scene.” And the hallmark of The White Lotus in a way is to make you laugh while simultaneously making you uncomfortable. “It’s a really clever balance of comedy and tragedy that confronts us with the less attractive sides of our human nature,” Bartlett says.

That balance of comedy and tragedy is something Bartlett deeply enjoys about acting. Even from a young age, he felt compelled by the craft — something that was sparked by an unlikely source: speech therapy he received after his brother accidentally knocked his front teeth out while trying to hit a spider. Bartlett had difficulty pronouncing the letter ‘s’ once his permanent teeth grew in, so his therapist gave him poems and monologues to read aloud. For a child as enthralled with imagination as he was, Bartlett immediately fell in love with acting. “I lived in my imagination,” he says. “I would dress up in weird clothes and wander around the yard like I was in an imaginary world.” That inspiration led him to stay with that therapist for years, fueling his passion for the stage.

Following theater camp and high school drama club, he got his first guest role on an Australian television series, The Flying Doctors. “I do not think I was very good,” he admits. “I was terrified when I first started in TV; It was a very intense time. ” He had always felt more comfortable doing plays in the theater, but he decided to push himself and go to acting school, at the time filled with optimism. But the insular nature of acting in his home country did not always give him confidence. “Australia can feel like a small industry when you’re working there, and there can be long times in between work,” he says. But Bartlett persevered. “It’s not that I have not thought about giving up, because we all have existential crises along the way, but acting seemed like a natural thing for me.”

In one of these moments of crisis, he decided to take a break and gave himself two options: go to New Zealand for a 10-day wilderness walk, or move to New York City and take classes. “I chose New York and fell in love with the stimulating environment,” he says. And it was not long before he booked a role. Through a friend-of-a-friend, he managed to get an audition for one of the biggest television shows at the time, Sex and the City. The role was Oliver Spencer, a shoe distributor, slightly fickle man-about-town and hot new friend to lead character Carrie.

“They called me up one night, and two days later I was in a room with Sarah Jessica Parker. That was my first job in the US, which was shocking and thrilling, but amazing, and felt like a dream. ”

Considering that first Sex and the City gig, it seems fitting that HBO were involved in his current career renaissance — one that’s already paying off. “I think acting was something I was always going to do, I kept falling into it and loved it,” Bartlett says, “but after The White Lotusthere have been wonderful things coming my way. ”

Like Armond, his Physical character has a public face that hides the complexity beneath. As Vinnie Green, a health and fitness guru, he seems to be everything frustrated ’80s housewife Sheila (Byrne) wants in life. “He acts as a counterpart to Sheila, who has this public face, but she’s got this inner voice berating her, and Vinnie has similar childhood trauma that he’s carrying,” Bartlett explains. “It’s brilliant because those things are still relevant now. We’re packaged differently, but there’s still a similar struggle between what’s going on inside and what you’re showing to the outside world. ”

Bartlett has also recently finished filming another HBO Max series The Last of Us, based on the hugely popular video game and set to premiere next year. He admits he did not know much about the story before starting work on the show, but he knew it was something special when he read the first script. “I’m not a gamer,” he says, “but if you’re a gamer, then you know it’s an amazing world and people really connect to that game in such a strong way.” Adapting a video game into a TV series can be very tricky, but he says they’ve done a beautiful job in making the “character relationships feel poignant and strong, in a big world.”

Right now, he’s on the set of the Hulu limited series Immigrant, which tells the origin story of the Chippendales stripper troupe. Starring alongside Kumail Nanjiani, Andrew Rannells, Dan Stevens and Juliette Lewis, Bartlett plays Nick De Noia, a choreographer from New York who helps take the show to the next level. “It’s a fantastic balance between this fun world of these male burlesque dancers and this really dark underbelly that is quite confronting and intense,” he says.

So, it requires nuanced duality, serious daring and proper acting chops? That certainly sounds like a job for Bartlett.