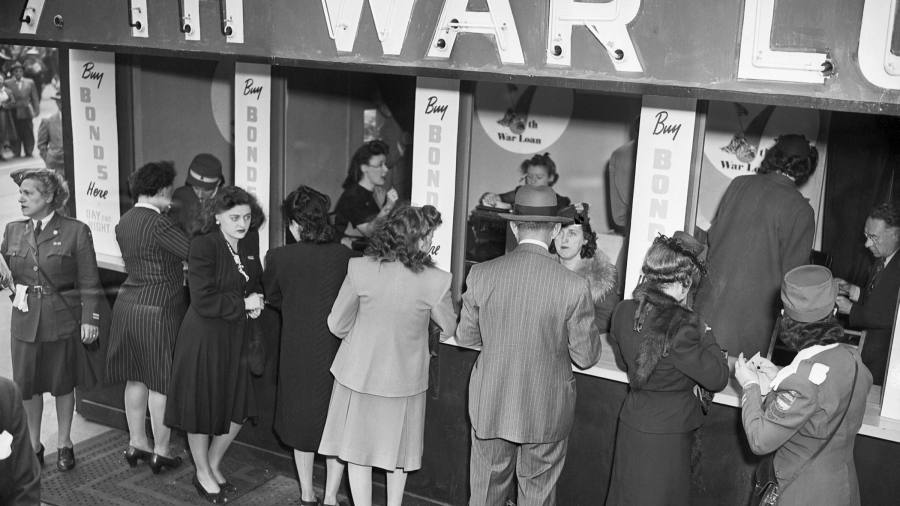 The conflict in Ukraine is a conventional land war in Europe, where authoritarianism is seeking to crush democracy. That chimes with the first phase of the second world war. War bonds are another recurring element. Ukraine has issued about $ 300mn of war bonds in its currency, the hryvnia, to support its fightback against Russia. But what Ukraine needs now is a much larger financing in dollars or euros that is guaranteed by the west.

The pitch book for the offering would boast some persuasive bulletpoints. A victory for Ukraine would be a victory for the free world. By increasing the chances of that outcome, the bonds could be regarded as social impact investments. The guarantee would leverage foreign private capital into the war effort, supplementing cash aid from foreign governments. Smart accountants could place the guarantee off balance sheet, ensuring the liability did not increase the national debt of sponsoring countries.

As a final flourish, bulge-bracket banks could structure and syndicate the deal on a pro bono basis. That would generate a philanthropic buzz for staff and positive external PR to boot.

Modern museum exhibitions on the home front in the second world were often display posters for war bonds bearing such slogans as “Lend to Defend”. Governments sold the debt to retail investors motivated by patriotism and the desire to stash some savings. The US raised $ 185bn – almost $ 2.8tn in today’s money – in this way. Proceeds were applied to the war effort and general expenditure.

Ukraine has issued war bonds in the same spirit. But retail bond offerings are tricky to pull off in a country where intense attacks by Russian invaders have displaced around 13mn people. I am told the central bank ended up absorbing a proportion of the modest issuance.

A couple of weeks ago, the IMF estimated Ukraine would need support of $ 5bn a month for the next three months. For private capital to move the dial for Ukraine, that too would need to be measured in billions. The ethical tinge of the bonds might help. After all, bond issuers have raised some $ 1.6tn for combating climate change.

International bond markets are, however, closed to the independent republic of Ukraine for the obvious reason that it may cease to exist. Ukraine credit default swaps, which insure bond investors against repayment failure, are quoted at six times their prewar price. Ten-year bonds change hands at a rock-bottom price of around 30 cents on the dollar.

Even if fresh issuance was possible, the implicitly required coupon rate of around 25 per cent would be unaffordable for Ukraine. But that price blends starkly different outcomes. The first is defeat for Ukraine and its annexation – direct or via puppet regime – by Russia, followed by a lengthy default and economic debilitation. The second is victory for Ukraine and a big reconstruction effort supported by the west.

It is tempting to envisage a war bond with a western guarantee that would only kick in if Ukraine was defeated. But bond market professionals are skeptical about guarantees with bells and whistles. They say Ukraine’s war outcomes are too imponderable for investors to price. A blanket guarantee would be preferable, they add. This could come from the US or the EU. In the latter case, the guarantee would represent modest mitigation by states such as Germany and Italy for supporting Russia via energy payments.

The subtlety highlighted by one bond syndicate boss is that a blanket guarantee would apply even if Ukraine won. It would therefore cover partial losses to investors resulting from the subsequent – and inevitable – restructuring of Ukraine’s $ 95bn in external debt.

A fully-guaranteed bond would bear weaker ethical bragging rights, making some form of risk sharing preferable. Either way, one possible model for Lend to Defend (Ukraine Version) would be the sovereign bonds issued by countries such as Israel and Jordan, which are guaranteed by arms of the US government.

One objection to raising a Ukraine war bond in New York or London is that the west should simply give Ukraine the same amount of money outright. But there is respectable argument that international debt fosters budgetary responsibility better than handouts.

Equally, isolationists would say that guarantees could cost overburdened western taxpayers too much. I would argue that the price of permitting a Russian victory is too dear for the west, denominated in any currency and at any maturity.