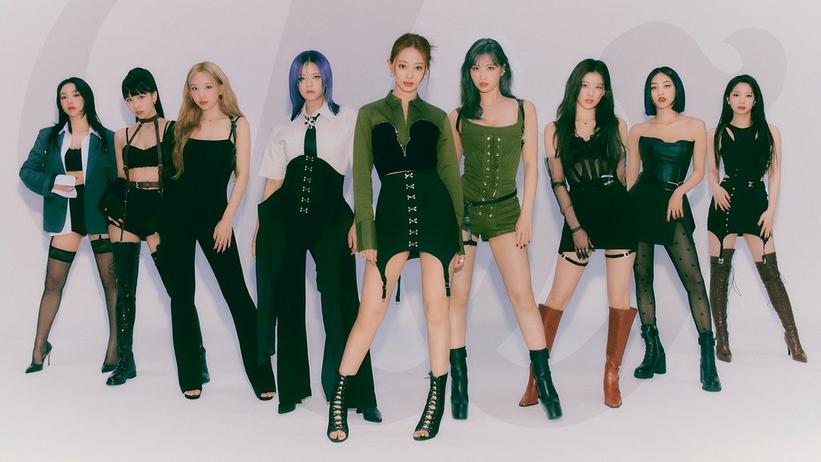 Since TWICE released their first EP in 2015, they have had a way of uplifting people through their music. The K-pop girl group has taken the world by storm with hit after hit — including “Fancy,” “Feel Special,” and “I Can’t Stop Me” — and now, they’re ready to enter a new era.

Wed Aug. 26, TWICE will release their eleventh mini album, Between 1 & 2. The project sonically takes inspiration from the early 2000s (as evidenced by the upcoming single they’re teasing, “Talk that Talk”), but overall presents a theme of connecting TWICE with their fans, ONCE — hence the project’s numerical title.

Although TWICE has long been breaking barriers for female groups worldwide, the past 18 months have arguably been their most impactful to date. Earlier this year, they brought the Twice 4th World Tour “III” to the US, playing nine sold-out shows that saw over 100,000 attendees and made them the first K-pop girl group to hold stadium shows in North America (and only the second in K-pop history after BTS). Before that, their 2021 releases, the mini album Taste of Love and the Korean album Formula of Love: O+T=<3earned TWICE theirs first top 10 projects on the Billboard 200.

They look to expand on that success with Between 1&2which comes just one month after TWICE released their fourth Japanese studio album, Celebrateand two months after Nayeon’s solo debut with the EP I’M NAYEON. As they continue to mature their sound and grow their fan base, the women of TWICE are also proving that they’re powerful as both individuals and a unit — and that their star power is only on the rise.

GRAMMY.com caught up with TWICE’s nine members — Nayeon, Jeongyeon, Momo, Sana, Jihyo, Mina, Dahyun, Chaeyoung, and Tzuyu — ahead of the EP release to discuss this new chapter of their careers, preparing for Between 1 & 2, and what their impact means to them.

First off, you guys recently renewed your contracts with JYP. That’s a big milestone. What are you excited about going forward as a group? What does being in this group mean to you?

Jihyo: We didn’t realize that all members had renewed their contracts until right before the official announcement. We wanted to share this incredible news with our fans as soon as possible because our fans are the main reason why we all decided to renew our contracts with JYP.

We are excited to explore what new styles of music and concepts we can bring to the table and are looking forward to the increase in our members’ musical contributions to the albums. Being a member of TWICE means having life-long friends and family. The sense of belonging will forever remain with us.

Nayeon was recently the first member to go solo, and you mentioned that your band members helped make important decisions. Can we expect more solo projects from the rest of the group in the future? What was it like preparing something to perform on your own?

Nayeon: I felt a lot of responsibility by being the first member to launch a solo project. Even though I’M NAYEON was a solo project with my name literally written in the album title, I knew that I’m not only representing myself through this album, but also representing TWICE. Therefore, I felt the obligation to pave a clean, smooth pathway for other members who might be thinking of releasing a solo album in the future. Along my journey as a solo artist, all members of TWICE made sure to take the burden off my shoulders by being supportive and giving me important feedback when I needed their opinions.

For this new mini album, Between 1&2, what can fans expect the overall vibe and sound to be like? Did you try anything new?

Jeongyeon: There are a total of seven tracks in this album, and all tracks sound different from each other. We are exploring different genres such as pop, dance, ballad, and rock, so you can expect a variety of styles in this album.

We have incorporated retro vibes into the album, since one of the concepts of the album is Y2K. The tracks that embody the retro concept the most are “Talk that Talk” and “Brave.” Even though the styles are different, the tracks are connected under the theme of “the conversation between ONCE and TWICE,” like how the album title Between 1&2 implies.

What did you guys enjoy most about preparing this mini album? Is there anything the fans should look out for?

Dahyun: I enjoyed writing lyrics for the two tracks “Gone” and “When We Were Kids.” As our time as TWICE members grow, the members’ participation in the album is increasing, which shows how we are growing as artists each year. You can look out for CHAEYOUNG’s lyrics in the song “Basics,” and JIHYO’s music and lyrics in the song “Trouble.”

Do you guys have a song you enjoy the most from this album?

Chaeyoung: I personally love “Basics” too [a] very obvious reason: I wrote the lyrics myself. “Basics” is a fast-paced dance song about the need to put importance in the basics of love by getting to know each other slowly, instead of diving straight into a relationship.

For the upcoming music video, can you explain the concept or theme? How does it relate to “Talk that Talk”?

Dahyun: The music video is about TWICE members looking for codes and investigating the mission of confessing our love to our fans, ONCE. With the concept Y2K trending, you can find fragments of Y2K-themed images and styles within the music video. This concept relates to “Talk that Talk,” since the melody is in an addictive retro pop/dance style that reminds you of the year 2000.

Jeongyeon: Also, the lyrics of “Talk that Talk” are about trying to get the other person to say everything on his/her mind, which relates to the theme of the music video, where TWICE undergoes the mission to make ONCE say “I LOVE YOU ” two TWICE.

You’re one of the top girl groups in the world right now. That can come with a lot of pressure, but why do you think TWICE has been so successful over the years? What do you think draws listeners in?

Mine: I believe the unique point of TWICE is that we are always true to our music style. Even though we’ve tried different concepts and genres over the last years, our music has that power of making the listeners realize that they are listening to TWICE’s song. I think [that’s] what attracts listeners to our music and our group.

How have you guys grown as a group over the years? Is there anything you want to change going forward?

Mine: Looking back at ourselves since the debut, I noticed that our members’ album contributions have grown significantly. It started out with writing lyrics, but now, our members are capable of composing and vocal directing, too.

Momos: The growth of TWICE is absolutely magical, but I also want to focus on the growth of our fans. We’ve heard that our songs bring back the memories of significant events relating to a certain era of a person’s life. I love how fans say that our songs remind them of a time and place when they were listening to the song. This relationship between our music and our fans’ memories is something that I want to keep on building going forward.

Is there anything you’ve enjoyed doing this year outside of music promotions? Any new hobbies?

Tzuyu: With the opening of our individual Instagram accounts, we’ve been able to share our personal lives with our fans. Recently, I’ve had a delicious meal with CHAEYOUNG and posted a photo taken by her on my Instagram, which fans loved.

I’m also trying to find new hobbies by taking one-day classes with DAHYUN. We recently made cute pottery and enjoyed every single moment of it. I want to try leather crafting next.

Do you have any new goals for the rest of this year?

Sana: I hope all our members can stay healthy, both physically and mentally. The well-being of all nine members is crucial to all of us, as we are so closely connected and are basically a family. We will continue to take good care of ourselves, as well as other members’ to spread the bright energy of TWICE to ONCE all around the world.