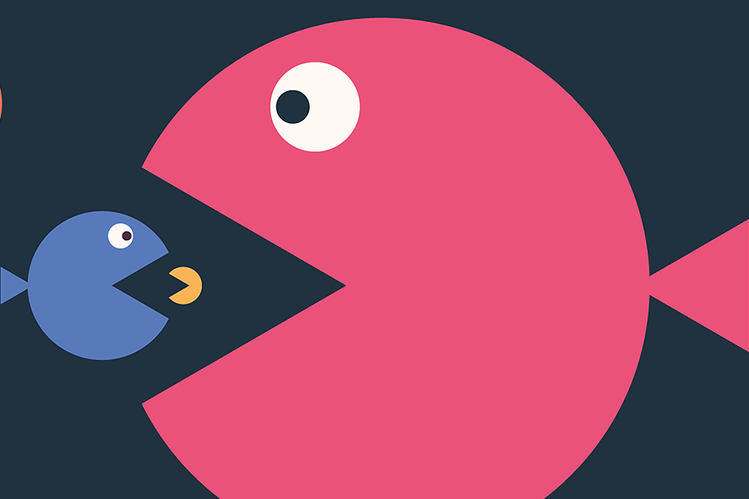 Financial News has turned 25! To celebrate, we’ve produced a special edition looking back at the City over the past quarter of century. Here, we take a look at the deals that helped build the Square Mile.

In 1990, a group of mergers and acquisition specialists arrived in London from the US in anticipation of a wave of big-ticket deals.

Among them was Scott Simpson, co-head of international transactions at Skadden, Arps, Slate, Meagher & Flom, who was sent to London by one of the law firm’s co-founders Joseph Flom.

“Joe told me to be ready for a wave of hostile takeovers in Europe. It took another seven years after I arrived to materialise, but when it happened, it was significant,” recalls Simpson, who, having cut his teeth during the Wall Street M&A boom, was able to deploy his expertise as Europe’s M&A market was effectively created from scratch.

When Financial News was launched in the mid-1990s, European mergers and acquisitions activity stood at $386m. By 1999, it had topped $1tn for the first time, according to Refinitiv data, and had grown three times faster than the global M&A market. When FN spoke to senior dealmakers and regulators who led or oversaw the most transformational deals of the past 25 years, several categories of deals emerged — those that shaped the industry titans of today, those that marked a moment in time, those that were career-defining for their creativity and innovation, and those that should never have happened at all.

Some of the most significant ones were executed in a dizzying four-year period that ended with the bursting of the dotcom bubble. And few involved were as ambitious as Sir Christopher Gent, the former chief executive of Vodafone who, along with his advisers at Goldman Sachs and UBS, transformed the company from a small UK telecoms operator to the world’s biggest company in that sector with two giant acquisitions.

In January 1999, Vodafone acquired US rival Airtouch for $58bn, then in November it made a hostile $199bn bid for Germany’s Mannesmann — the first unsolicited bid for a German company. For bankers, this deal has stood the test of time for its sheer scale — it remains the biggest European M&A deal of all time.

The UK remains the most active and open M&A market in Europe, helped by its Takeover Code and Anglo-Saxon shareholder values, which prioritise adding value for shareholders.

But Vodafone’s stunning bid reflected a shift in action to Continental Europe, where a lack of uniform takeover rules triggered a wave of hostile bids.

Morgan Stanley’s Michael Zaoui arrived in London in 1990 after spending his early career in New York. Over the next decade, the Frenchman enjoyed a starring role on a number of hostile European deals, sometimes alongside, but also across the table from, his brother Yoël, who led Goldman Sachs’ advisory push across Europe.

In 1999, they teamed up to defend French oil company Elf Aquitaine against a hostile takeover from rival TotalFina. The Zaouis agreed that attack was the best form of defence and advised Elf to make a $51bn cash and stock counter bid for its aggressor. The so-called Pac-Man Strategy, named after the iconic video game, had been deployed in the US in the 1980s but was a rarity on the European scene. Ultimately, TotalFina paid $54.3bn to secure Elf in what, at the time, was France’s largest takeover.

The bursting of the dotcom bubble in 2000 brought the M&A boom to a shuddering halt and European deal activity halved over the next two years. The deal that came to define the irrational exuberance took place in the US where media group AOL acquired Time Warner for $182bn. It turned out to be a disastrous merger that prefigured the dotcom crash.

M&A activity resumed in earnest in 2004 with one of its most eye-catching and controversial battles. The $3bn acquisition of Gucci by ‘white knight’ bidder Pinault-Printemps-Redoute was noted for its innovation. Dutch takeover rules — or rather a lack of them — enabled LVMH, led by Bernard Arnault, to amass a stake in Gucci as part of his plan to seize control of the board without having to pay a premium by making a full offer. “The odds did not look so good,” recalls Zaoui, Gucci’s lead adviser.

READ Zaoui brothers’ profit surges 300% on back of megadeal roles

But Simpson had been working on an audacious defence. Gucci issued new shares to an employee share-ownership plan to the same value as LVMH’s stake. Arnault’s team was unaware of the loophole and was blindsided. When Pinault decided to make an official acquisition offer, Zaoui had secured the white knight he was looking for.

In September 2005, an attempt by the Spanish government to orchestrate a merger between its two national champions, Endesa and Gas Natural, sparked a two-year pan-European hostile takeover battle. With Endesa in play, Germany’s E.On moved before being ultimately outbid by Italy’s Enel in 2007, which secured a deal alongside Spain’s Acciona that valued Endesa at €44bn.

In 2006, another Spanish company — construction group Ferrovial — created a new category of M&A when it led a consortium of PE firms to bid $30bn for UK airports operator BAA. It was the first such big infrastructure transaction and paved the way for several landmark deals in the sector. Ferrovial and Endesa helped their adviser Citigroup to become the top bank in Spain and the transactions proved career-defining for the banker involved, Manolo Falco, who is now global head of Citi’s banking capital markets and advisory business.

The irrational exuberance that prevailed in 2000 returned in 2006 as cheap debt powered a boom in leveraged buyouts. KKR bought UK pharmacy chain Boots for $21.3bn in March 2007. But the deal that came to define the period came a month later when Royal Bank of Scotland led a consortium that bid $98bn for Dutch bank ABN Amro, which had already received an approach from Barclays. RBS had earned its reputation as an aggressive dealmaker eight years earlier, when it trumped arch-rival Bank of Scotland to secure NatWest in 1999.

Former RBS boss Fred Goodwin’s relentless focus on execution earned him the nickname ‘Fred the shred’. But this time, the deal proved his undoing. As the clouds of the looming financial crisis began to gather, Barclays pulled out of the race, allowing Goodwin to take the prize but saddling him with a $100bn headache.

“This is the financial services equivalent of AOL-Time Warner,” one of ABN’s defence advisers told FN at the time. His prophecy came true. Within a year, the global financial system had collapsed and RBS had to be bailed out.

The subsequent break-up of RBS led to arguably one of the most significant PE-led deals of the past 25 years. In 2010, RBS sold Worldpay, its payments business, to Bain Capital and Advent for $2bn as a condition of its bailout. Five years later, Worldpay was listed with a $7.4bn valuation. Then, in 2017, it merged with US rival Vantiv in a $10.4bn deal.

By 2019, it had matched the market cap of RBS when it was taken private in a $35bn acquisition by Fidelity National Information Services. “Worldpay was a real franchise private equity deal and an example of private equity at its forward-looking best. Bain and Advent were first movers in fintech,” said one banker.

PE firms have taken an ever-growing role in dealmaking over the past 25 years and now account for a record proportion of European M&A activity.

PE has come a long way since 2007, when it felt like every public company was under siege. Since then, boards have become more savvy, while PE firms are now seen as responsible investors

Saba Nazar, co-head of global financial sponsors at Bank of America, adds: “Twenty years ago, financial sponsors were perceived by some in the market as second-class citizens and a fund sized at $2bn-$3bn was considered huge. Now there are funds at $20bn to $30bn. Private equity has become mainstream and institutionalised and diversified across investment strategies.”

London Stock Exchange Group has been an active participant in the M&A market since 2000, when it fended off a hostile offer from the Stockholm Stock Exchange, the first of four hostile approaches for the LSE, which was also involved with two abortive deals, almost 16 years apart, with Deutsche Börse. Then, in 2019, LSEG pulled off the $27bn acquisition of Refinitiv. The deal represented a dramatic pivot as the firm moved into data provision.

“LSEG has executed a successful growth strategy over the last decade both organically and via M&A. The transformational acquisition of Refinitiv was particularly memorable,” says Philip Apostolides, a partner at Robey Warshaw and one of the advisers to the LSE.

Acquisitive foreign corporates have found the UK to be a happy hunting ground, with inbound M&A a constant factor. Middle Eastern and Chinese buyers snapped up assets following the financial crisis, while India’s Tata purchased UK steelmaker Corus in 2007 in what was the Takeover Panel’s first sealed bid auction to be held at night.

In 2019, Takeda Pharmaceuticals sealed the largest-ever UK acquisition by a Japanese company when it paid $80bn for Dublin-listed Shire Pharmaceuticals.

The dreams of the dotcom boom that were dashed in 2000 have subsequently come to pass, and old media empires have been snapped up as content and delivery has fused. The 2018 battle for Sky involved the titans of US media Walt Disney and Comcast Corp, before the latter prevailed with a knockout $48bn bid. Companies from Unilever and Shell to BHP Billiton have pursued multi-billion dollar corporate reorganisations.

M&A deals take months or even years to put together, only to be snuffed out, sometimes with indecent haste. Kraft’s more than $140bn bid for Unilever was the biggest deal that never happened — within a week, the deal was dead in the water, rebuffed by shareholders.

With deglobalisation and greater protectionism, the future for big cross-border M&A is looking less certain. Last month, Softbank’s $66bn sale of Arm to Nvidia collapsed amid regulatory scrutiny that has intensified as geopolitical tensions between China and the West have grown. Even the UK — the world’s most open M&A market — has toughened its stance with the introduction of the National Security and Investment Act.

It is tempting to wonder where all the hostile cross-border acquisitions have gone and whether they will return. “We’re in a place where national agendas are impacting transactions in a big way,” says Simpson. “The rise of foreign direct investment regulations, while often driven by real national security concerns, has added additional levels of complexity and raised the possibility that national interests could influence some cross-border regulatory outcomes.”

But with financial sponsors attempting ever-bigger deals and a new wave of M&A, driven by ESG factors, now underway, this could herald a new era.

“M&A will always be an important part of our capital markets and an accelerator of company growth plans. When anyone has tried to call the end of the M&A market, they have always been proved wrong,” says Zaoui.

To celebrate Financial News’ 25th anniversary, we compiled a list of the City’s most influential figures over the past quarter of a century.

For more from our anniversary special, you can also read this exclusive interview with Mayor of London Sadiq Khan here, this feature on how the world of work in the City has completely transformed in 25 years, or this rare interview with top dealmakers Sir Simon Robey and Simon Warshaw.