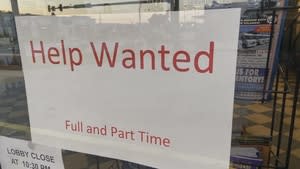 You’d be forgiven for thinking the economy has been sending mixed messages recently, with stellar jobs reports rolling out of Washington – and more dollars rolling out at payments at the grocery store due to inflation.

On Friday, a report showed the US added another 372,000 jobs in June, continuing the trend of economic recovery that gave President Biden a rare moment to cheer, while acknowledging the pain many are going through.

READ: Elon Musk informs Twitter he is terminating proposed $ 44B acquisition; board digs in

This period of high inflation and low unemployment is something that has not been seen in more than 70 years, University of Florida Economist Dr. Amanda Phalin explained.

“If you’re someone who’s worried about a recession happening, today’s jobs report was fairly good news. It came in better than expected, we have replaced 98% of the jobs that we lost during the pandemic, ”she said. “If you’re someone who’s worried about inflation, this is bad news. Because the economy is still humming along, prices are still rising. ”

For much of the last year, Phalin has been predicting that inflation would not peak until mid-2022, something she stuck by in her interview Friday. According to her, supply chain issues should be beginning to resolve themselves, easing up on the pressure being put on prices.

However, she said the Biden administration could be doing more to facilitate that, while pressuring corporations to increase their inventory supplies to ensure this post-pandemic situation does not repeat.

Phalin upgraded her future outlook ever so slightly, saying the chances that the Federal Reserve will be able to ease the nation out of inflation while avoiding a recession – a so-called “soft landing” – were better than before thanks to the continued strong jobs numbers.

“If the GDP data shows that we have negative growth, or have had negative growth for two consecutive quarters, one rule of thumb says, yes, we are in a recession,” she said. “But, our unemployment rate remains very low. It’s not even ticking upward, so that says we’re doing just fine. ”

She summarized her thoughts by saying the economy was not in bad shape, nor was it in great shape. It was somewhere in between, though a person’s outlook on it tended to be colored through their political views.

While she said it would still be very difficult to avoid a recession as it’s never been done before, she said if one were to happen, it would be far less severe than 2008.