The Device That Changed Everything 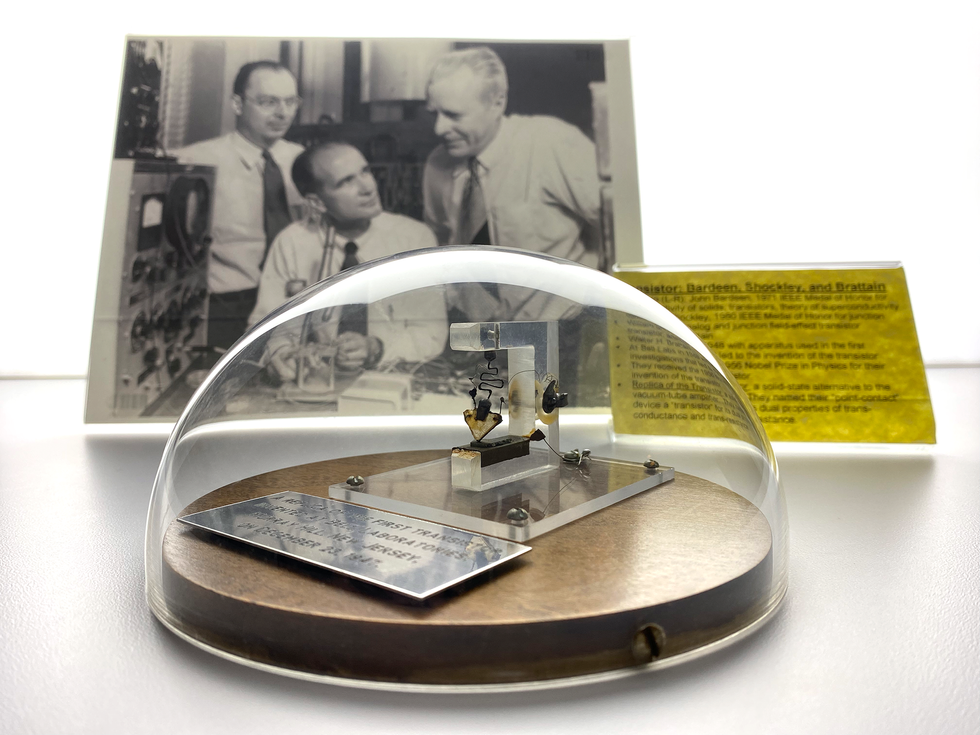 I was roaming around the IEEE Spectrum office a couple of months ago, looking at the display cases the IEEE History Center has installed in the corridor that runs along the conference rooms at 3 Park. They feature photos of illustrious engineers, plaques for IEEE milestones, and a handful of vintage electronics and memorabilia including an original Sony Walkman, an Edison Mazda lightbulb, and an RCA Radiotron vacuum tube. And, to my utter surprise and delight, a replica of the first point-contact transistor invented by John Bardeen, Walter Brittain, and William Shockley 75 years ago this month.

I dashed over to our photography director, Randi Klett, and startled her with my excitement, which, when she saw my discovery, she understood: We needed a picture of that replica, which she expertly shot and now accompanies this column.

What amazed me most besides the fact that the very thing this issue is devoted to was here with us? I’d passed by it countless times and never noticed it, even though it is tens of billions times the size of an ordinary transistor today. In fact, each of us is surrounded by billions, if not trillions of transistors, none of which are visible to the naked eye. It is a testament to imagination and ingenuity of three generations of electronics engineers who took the (by today’s standards) mammoth point-contact transistor and shrunk it down to the point where transistors are so ubiquitous that civilization as we know it would not exist without them.

Of course, this wouldn’t be a Spectrum special issue if we didn’t tell you how the original point-contact transistor worked, something that even the inventors seemed a little fuzzy on. According to our editorial director for content development, Glenn Zorpette, the best explanation of the point-contact transistor is in Bardeen’s 1956 Nobel Prize lecture, but even that left out important details, which Zorpette explores in classic Spectrum style in “How the First Transistor Worked” on page 24.

The best explanation of the point-contact transistor is in Bardeen’s 1956 Nobel Prize lecture, but even that left out important details.

And while we’re celebrating this historic accomplishment, Senior Editor Samuel K. Moore, who covers semiconductors for Spectrum and curated this special issue, looks at what the transistor might be like when it turns 100. For “The Transistor of 2047,” Moore talked to the leading lights of semiconductor engineering, many of them IEEE Fellows, to get a glimpse of a future where transistors are stacked on top of each other and are made of increasingly exotic 2D materials, even as the OG of transistor materials, germanium, is poised for a comeback in the near term.

When I was talking to Moore a few weeks ago about this issue, he mentioned that he’s attending his favorite conference just as this issue comes out, the 68th edition of IEEE’s Electron Devices Meeting in San Francisco. The mind-bending advances that emerge from that conference always get him excited about the engineering feats occurring in today’s labs and on tomorrow’s production lines. This year he’s most excited about new devices that combine computing capability with memory to speed machine learning. Who knows, maybe the transistor of 2047 will make its debut there, too.

This article appears in the December 2022 print issue.

From Your Site Articles

Related Articles Around the Web

The Clippers Are Hanging On Despite A Lack Of Leonard