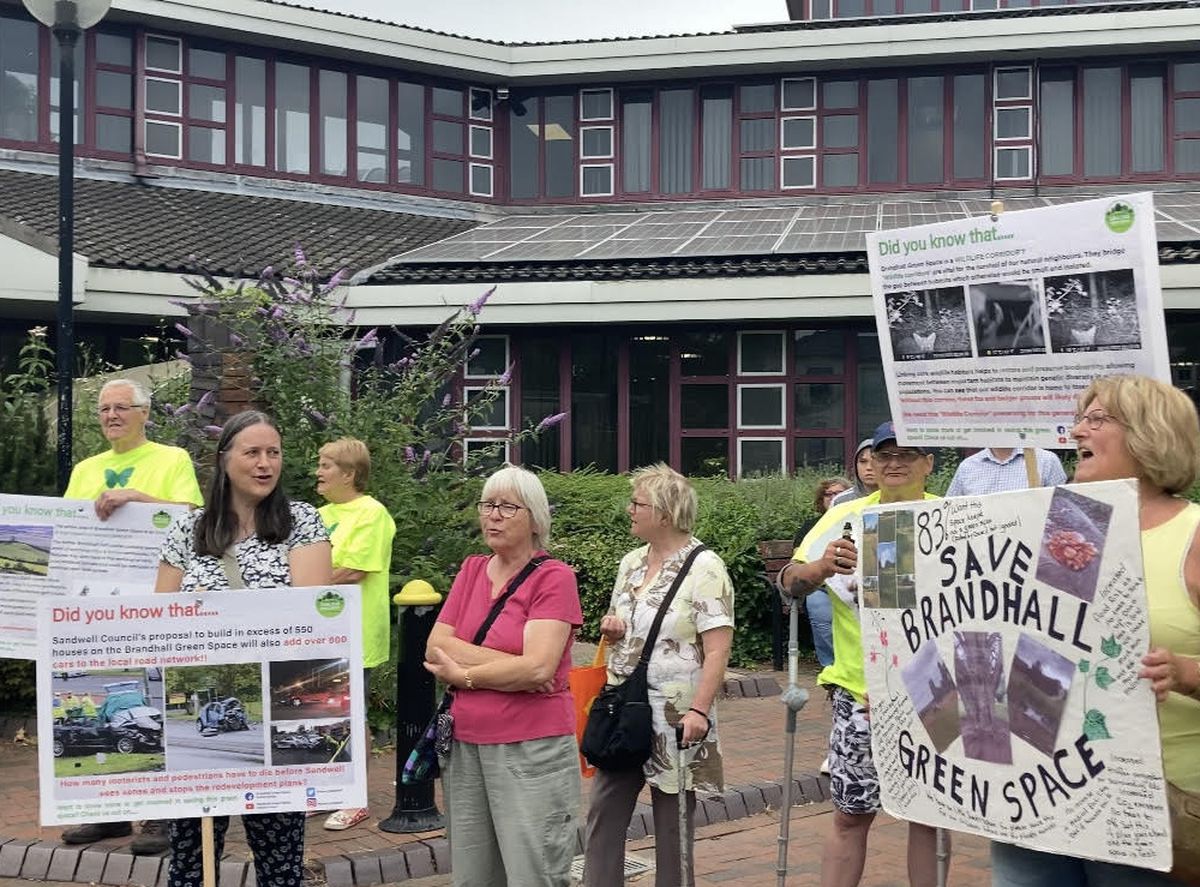 It comes after a Labor councillor, Ellen Fenton, called for the decision to be scrutinized in a special meeting, as cabinet members looked on in shock.

Sandwell council had intended to build 550 houses, a new public park, and a new school at the former Brandall golf course, in Oldbury – dubbed the Brandhall Village. But political pressure from Brandhall Green Space Action Group (BGSAG), who campaigned to keep the green space as undeveloped as possible, and a public consultation where 83 per cent of individuals objected to the plans, had forced the local authority to reconsider.

After a lengthy debate, the members voted on option three – to build 190 new houses, a school to replace the aging Causeway Green primary school, and develop a 26-hectare park.

They also approved the majority of the site as a zone for nature conservation.

Special documents authored by Sandwell council also factored in a judicial review as a likely risk to the council if the development went ahead, including “reputational impact for the council”.

He raised five objections to councilors and claimed Sandwell council had been deliberately “ignoring pre-existing agreements” that protect the green space.

He said: “As early as 2015, concerns arose about Sandwell’s treatment and narrative around Brandhall green space.

“The Local Plan, dated 2012, designated Brandhall green space as ‘white land’. However, when initially purchased in 1928 by Oldbury district council, multiple sources document that it was purchased ‘with a view to its preservation as a public open space’ .

“The first 2019 consultation was hugely flawed, with documentation selectively narrated, clearly biased and weighted towards golf course closure. For example, Sandwell council used an out-of-date methodology and inaccurate profile data to estimate a level of “unmet need” for golf in the borough.

“The council consultation report stated that 42 per cent of residents would be unaffected if the golf course were to close: this magically transformed into 70 per cent by the time the cabinet met and voted for closure on the 27th of May 2020. The proposed park which was presented to cabinet was, in fact, 62 per cent smaller than the narrative stated.”

Mr Bennett also claimed the former golf course was never subject to a Strategic Housing and Land Availability Assessment (SHLAA) – a technical exercise into the suitability and achievability of a potential development site.

Government advice says a SHLAA has no bearing on the determination of planning applications and should not be used to allocate sites for housing development.

Councilor Peter Hughes, the cabinet member for regeneration and growth, hit back at critics who suggested the public did not receive fully unredacted documents about Brandhall green space.

He said: “I can confirm that the information contained in the cabinet report […] is identical to that which has been provided to the public. In fact, it’s been identical all the way through.”

The majority of the meeting discussed the construction of a new school, including its financial details.

Michael Jarrett MBE, the director of children’s services at Sandwell council, claimed £5 million will be used by the school condition grant funding, in addition to £5 million from the sale of Brandhall green space will be used in part for the new school.

He said: “The next £2.5 million funding gap will be confirmed from the effective use of the school condition funding that we received from the Department of Education. On an annual basis we ordinarily receive £3 million per annum for the funding of school condition grant funding. However, last year we received £5 million and we’re hoping that there is going to be a recurring amount of funding.

“We’ve explored a range of options in relation to alternative sites and where that may well be a suitable venue for another school. Given the guidance that we have to follow from the Department of Education in relation to the support that is required for a two form entry primary school means that we have no other alternative other than to locate it in the site.

“Within the cabinet report it detailed a slightly larger 2.68 hectares versus the guidance that comes from the Department of Education. But that takes account of natural boundaries rather than anything that we have done.”

In a letter to residents, Conservative councilor Jay Anandou, one of the main campaigners backing the BGSAG said the answers provided by the council were “inadequate”.

He said: “The scrutiny board has questioned the large variance in the finances on the options proposed by the cabinet, and wanted a full breakdown and the funding arrangement of the proposed option.

“The SHLAA assessment was conducted, why wasn’t it included as part of the cabinet’s decision making process? Why [was] the same methodology used for other sites included in the SHLAA wasn’t used at Brandhall?

“The cabinet needs to respond to all the above questions as there are clear gaps in the Sandwell cabinet’s decision making process which by the help of the BGSAG was exposed. Now, it is with the Sandwell cabinet to make the right decision to halt all development on Brandhall and listen to its residents.”